The U.S. Government is the major driver of biometrics, with its deep urgency for improved security, resulting in higher defense budgets and wide agreement on the use of advanced security technology.

Biometrics Research Group Inc. conservatively estimates that the U.S. Government is spending at least US$450 million per annum on pure biometric research.

The National Commission on Terrorist Attacks Upon the United States identified biometrics as a key set of technologies that could provide the enhanced security required to protect U.S. borders. Historically, legislation and government implementation have been catalysts for the use of advanced technology. With homeland security initiatives increasing, the escalating use of biometrics is projected to propel growth in the near to mid-term. 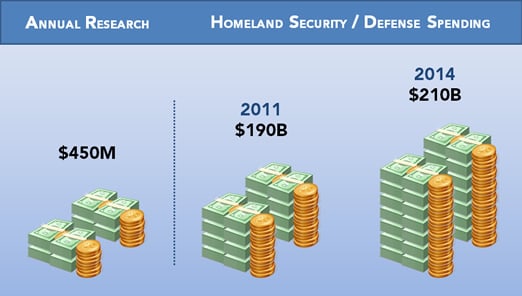 According to the National Priorities Project, homeland security spending has risen from US$16 billion in fiscal 2001 to US$69.1 billion in 2011 – a 300 percent increase. The Center for Strategic and International Studies reported estimated that Department of Homeland Security contract spending for security devices and technology nearly doubled from US$5.4 billion in 2004, the first year the department was fully operational, to US$10 billion in 2010.

Homeland security is an umbrella term for security efforts to protect states against terrorist activity. Specifically, it is a concerted national effort to prevent terrorist attacks within the U.S., reduce America’s vulnerability to terrorism, and minimize the damage and recover from attacks that do occur. Homeland defense is defined as the protection of U.S. territory, sovereignty, domestic population, and critical infrastructure against external threats and aggression.

Most homeland security and defense funding is allocated to mundane physical security measures and allocation to state governments to protect infrastructure, rather than specific investments in biometric technology. However, biometric technology is in the policy agenda forefront of the executive branch of the U.S. Government as a new innovation that will protect and secure national borders.

Earlier in the decade, biometrics had been identified as a major “killer application” within the information technology field. Not unlike the development of a previous killer application known as the Internet, the U.S. Government is funding biometric technology research projects through the military (i.e., Advanced Research Projects Agency). Of course, due to nature of biometric measures such as fingerprinting, a large proportion of this internal government research activity is also being conducted by law enforcement agencies (i.e., Federal Bureau of Investigation).

Internationally, there are several criminal and civilian government projects aimed at improving security, but it is the U.S. Government that has purchased biometric equipment on a grand scale. The U.S. Enhanced Border Security and Visa Entry Reform Act of 2002 required all entry ports to the U.S. to install biometric identifiers by October 2004. This required participating countries in the U.S. Visa Waiver program to issue machine-readable passports to their nationals as well, creating a huge opportunity for providers of biometric technologies.

The U.S. Department of Homeland Security also initiated regulatory policies that require certain levels of security for government agencies and enterprises. Heightened border security, aviation security, and network security are just three of many areas that DHS is targeting. Biometric technologies are also increasingly being deployed to protect government installations such as military installations, laboratories and hospitals.

In addition, the Biometric Research Group notes that other U.S. Government mandates, including the Health Insurance Portability and Accountability Act, the Graham-Leach-Bliley Act, and the Sarbanes-Oxley Act have acted as market drivers for biometric technologies.