Among the technologies displayed included fingerprint sensors from Validity Sensors. The firm demonstrated its “Natural ID” authentication technology, along with discussing its road map for personal computers and mobile sensors.

SecuGen confirmed at the show that its will soon release a software development kit for Android that will be able to integrate with its Android compatible fingerprint readers.

In terms of electronics geared directly to the consumer, Valencell demonstrated earphones that accurately and continuously measure fitness biometrics. The firm’s sensor technology continuously measures more real-time biometric and physiological data most other fitness monitors in the marketplace.

Indeed, this year, a major focus of the Consumer Electronics Show was in healthcare and fitness accessories that mainly integrated health biometrics with smartphone and other mobile technologies.

Hot technologies included a family of wireless and wearable activity and sleep trackers from FitBit, which includes an inexpensive, shower- and swim-proof Bluetooth 4.0 compatible wristband, along with pedometers and even an Wi-Fi smart scale, that measures not only weight but your body mass index and body weight percentage.

Another impressive device which received kudos was Spree, a high-tech headband, and reportedly the first biometric fitness device on the market to combine body temperature measurement with a standard heart rate monitor and movement tracker. The device aims to capture real-time data in order to optimize every workout and accurate performance measurement in one single and easy-to-use device.

According to Peter Linke, President of Dallas-based Hothead Technologies, Inc., which developed the proprietary technology in Spree: “Traditional bracelets, armbands and chest straps are fine for tracking heart rates and other basic information, but they ignore the critical element of body temperature. Knowing the temperature at which your body reaches peak performance is a huge advantage, and Spree is the only device that does it.”

Spree measures body temperature, distance traveled, speed, time, heart rate and calories burned, and combines these data points into simple graphs that indicate when your body is hitting its ultimate stride. Armed with this information, you learn where your body is burning the most calories, when it is building the most muscle mass and at what pace you are achieving maximum endurance.

Spree uses wireless Bluetooth technology to relay real-time information from the headband device to the smartphone app. Spree also stores the data in the unit for later download.

One of the most interesting biometric devices featured at CES however was a smartphone-enabled cardiogram from start-up backed with venture capital from Qualcomm. It’s called the AliveCor, a skin that you add to your iPod which turns it into a fully-functional electrocardiogram, or ECG heart monitor. The prototype device has actually been used to diagnose a heart attack and save a life on a plane and the device was recently cleared by the Food and Drug Administration for sale in the United States for use by licensed medical professionals to record, display, store, transfer, and evaluate single-channel ECG rhythms. 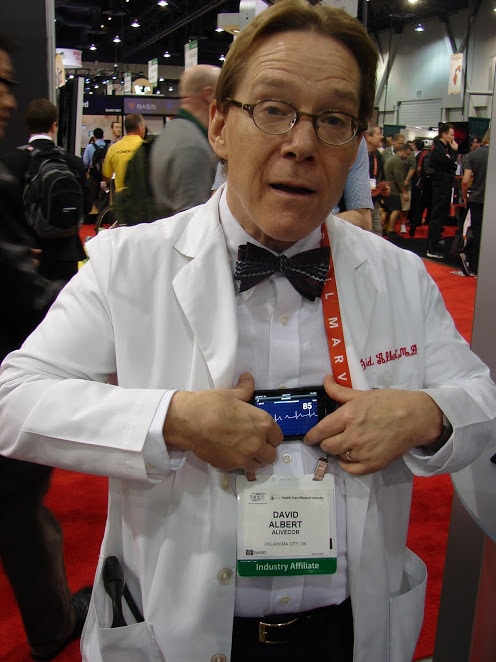 AliveCor plans to sell the device to both consumer and medical markets and has received permission to sell the device in consumer marketplaces in the European Union, so expect to be potentially able to the purchase the device at a Boots store in the UK, or at an Apotheken in Germany, or at an independently-owned pharmacy in France.

“Facial recognition is a powerful tool. It holds great promise for security as well as protecting the privacy of millions,” Boylan said. “At the same time, there are concerns that this technology could be misused. While MorphoTrust’s place is not in those policy debates, we can help inform the conversation. Whatever the opinions are, they should be decided with facts, not rumor or emotion.”

The session examined how facial recognition technologies are increasingly showing up in applications of all sorts. Whether used to secure hardware, enhance video games or establish a closer relationship with the consumer, the capabilities and implications of the technology are not always well understood. As noted before in a recent research note  published by the Biometrics Research Group, publisher of BiometricUpdate.com, it is expected that biometrics will ultimately be widely adopted in consumer electronics.

With Apple, the world’s largest computer and consumer electronic vendor, moving towards the wide-scale use of biometrics, BiometricUpdate.com editors predicted in December that the rest of the sector will follow suit. The research firm and news outlet projects a wide range of biometric firms will start catering their technological offerings to consumer electronic manufacturers in 2013, and that manufacturers will examine ways to integrate the new technologies into their own offerings. Boylan’s session was therefore timely analysis and a hopeful harbinger for greater biometric industry growth and public policy analysis of the impact of such technologies within the consumer electronics segment.