First reported by Nowhereelse.fr, the parts appear to have been posted by Japanese vendor Moumantai. 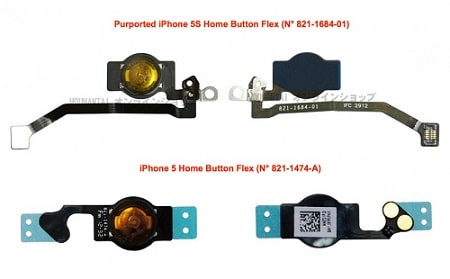 Reported previously in BiometricUpdate.com, Ming-Chi Kuo from KGI Securities, has proven himself to be a reliable source when it comes to Apple launch rumours, as his predictions are often right, having almost perfectly predicted the details and features of many recent Apple launches. In a report from Kuo to investors, it was included that the next iPhone, to be released in the third quarter of 2013, would feature a “fingerprint sensor.”

For some background on this speculation, In 2012, Apple entered into an agreement to purchase AuthenTec for approximately US$356 million. AuthenTec specializes in strong fingerprint-based security, ideal for mobile devices.

In October, the U.S. Patent and Trademark Office granted Apple a patent for biometric-sensor handheld devices that recognize a user by the image of their hand. Specifically, Apple patented the use of a biometric fingerprint sensor that is concealed behind a closed window on an iPhone.

After the sensor-less iPhone 5 launch, AuthenTec sold its embedded security division to INSIDE Secure, which many believed also strongly suggested an upcoming biometric iPhone.