The United States Government has denied that it operates a surveillance program with direct access to Google, Facebook, Apple and other Internet giants.

The Guardian claimed to have obtained a 41-paged PowerPoint presentation that stated that many popular Internet services had direct back doors accessible to the NSA, permitting the U.S. Government to spy and eavesdrop on an unprecedented number of people.

Both the government and the Internet firms deny that such a system is in place.  Over the weekend, the U.S. Director of National Intelligence James Clapper issued a statement saying that the government “does not unilaterally obtain information from the servers of U.S. electronic communication service providers” and that PRISM-related activities are conducted “under court supervision.”

The government claimed in a statement that “PRISM is not an undisclosed collection or data mining program. It is an internal government computer system used to facilitate the government’s statutorily authorized collection of foreign intelligence information from electronic communication service providers under court supervision, as authorized by Section 702 of the Foreign Intelligence Surveillance Act.”

According to government’s national security apparatus, PRISM is an internal system that the intelligence community uses to queue court-ordered requests to service providers for information. The government therefore says the program is not used to spy on domestic U.S. citizens.

Both chief executives at Google and Facebook also denied that their companies are actively participating in the PRISM surveillance program.  Google CEO Larry Page stated  that “the U.S. government does not have direct access or a “back door” to the information stored in our data centers.”

Facebook chief executive Mark Zuckerburg said in a statement that: “Facebook is not and has never been part of any program to give the U.S. or any other government direct access to our servers. We have never received a blanket request or court order from any government agency asking for information or metadata in bulk, and if we did, we would fight it aggressively.” 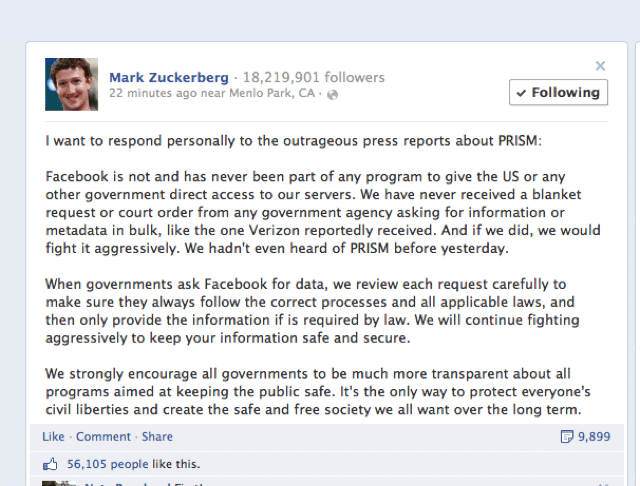 Facebook metadata contains the images of millions of faces that could potentially could be mined using facial recognition software.  Currently, the U.S. government only has military and law enforcement databases that leverage facial recognition.  Access to social networking systems could astronomically increase U.S. intelligence assets.

Earlier in the week, the Guardian reported that the NSA had issued secret court orders to Verizon, as well as AT&T and Sprint, to obtain millions of subscriber’s telephone records.  The court orders, issued in April by the secret Foreign Intelligence Surveillance Court, is the first known instance of collection of telephone records in the United States en masse.

President Obama denied that the U.S. government was eavesdropping on telephone calls.  He stated that the government only operated court-monitored Internet and phone surveillance programs that were specifically used to fight terrorism.

While the U.S. denies it is surveilling Internet data, Canada’s Globe and Mail newspaper reported that the Canadian defense department has had a secret Internet and global telephone eavesdropping system that it put in place in 2011.

While the U.S. government is denying that it operates an illegal surreptitious spy program, it will mostly likely seek extradition and sanctions against whistle blower Edward Snowden, an American IT consultant, who revealed his identity in Hong Kong this week.