The technology press has been generally impressed with the debut of Apple Pay.

As reported previously, Apple partnered with credit card companies, financial institutions and retailers for the new payment service, along with major merchants including Walgreens, McDonald’s, Macy’s and Staples to introduce a NFC-powered mobile payment service.

Biometrics Research Group, Inc. has noted that Apple had been preparing to launch its Apple Pay service for months, which would allow customers to use the iPhone’s Touch ID fingerprint sensor to verify their identity to securely and conveniently make retail purchases in stores. With the release of iOS 8.1 yesterday, consumers can now purchase items using Apple Pay on their iPhone 6 or iPhone 6 Plus smartphones.

According to a review in TechCrunch, setting up Apple Pay takes only a minute. If you have an iTunes account, Passbook will ask whether you want to use the card on file there for Apple Pay. If you do, the only other thing you have to do is to verify with your bank that you want to use it with Apple’s new payment service. If you don’t have a profile, then you can use the Passbook app to either manually add credit card information to a phone’s profile or take a photo scan of a credit card and add the security code from the back of the card.

Mashable’s review notes that Apple Pay is not able to scan vertical cards such as those issued for Chase Slate account owners. Users of those cards will have to enter their account details manually. Once the data has successfully be entered, consumers can purchase goods from NFC-enabled retailers. The purchase process involves holding your thumb to the Touch ID sensor and tapping it against the side of the payment terminal with the following symbol indicated below. 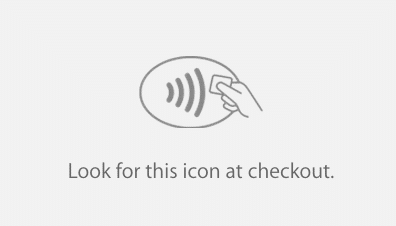 According to the above reviews, transactions take approximately a second and a half at retailers such as MacDonald’s and Walgreens.

It has also been reported that Apple Pay works in New York City taxicabs, which represents a huge convenience for commuters. According to the review in Quartz: “Users are also reporting that Apple Pay works in Boston taxis, and one person tweeting from the UK said their Apple Pay app was triggered inside a taxi there, even though the payment system hasn’t launched yet outside of the United States.”

The main problem, cited by the San Jose Mercury News however is that few retailers yet use the contactless payment system. Their review notes that while Apple estimates there are about 220,000 establishments that accept Apple Pay throughout the United States, which sounds like a lot, there are approximately 3.7 million retailers nationwide.

BiometricUpdate.com recently reported that activist investor Carl Ichan noted that due to lack of market penetration at its introduction, Apple Pay will have “limited financial impact” in 2015. He does expect a fairly rapid growth rate in the years that follow as retailers adopt the NFC payment system technology. A driver for the fast growth will be lower transaction fees. BiometricUpdate.com also reported that Apple will charge rates that will allow merchant to save as much as 1.25 percent on each transaction.

Biometrics Research Group, Inc. predicts that the inclusion of biometrics in mobile devices will generate about US$9 billion worth of revenue for the biometrics industry by 2018.