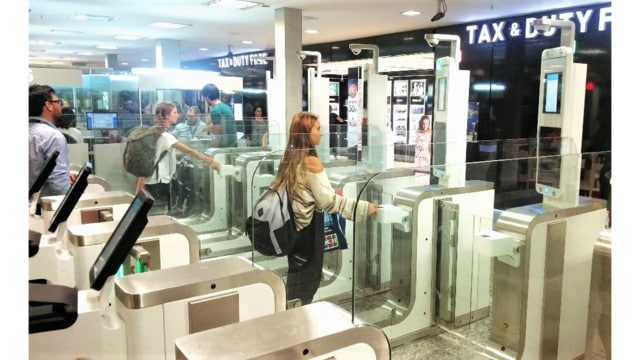 An automated biometrics-based border control solution by Vision-Box is already streamlining the clearance and border passage of Argentinian citizens entering the country at Buenos Aires Ezeiza International Airport, cutting the border clearance transaction time in half to as little as 17 seconds.

According to a company statement, airport security, traveler management capability and passenger processing capacity have just reached new levels and the system is on track to be expanded to departures and third country citizens.

Minister of the Interior Rogelio Frigerio commented in April that the installation of the border control system is fulfilling the Department’s goal of “speeding up border crossings to encourage tourism and investment in the country, while at the same time improving the border’s security levels”.

The Automated Border Control eGates at the Ezeiza arrivals terminal are available to passengers 18 years of age or older with Argentinian passport. Travellers follow intuitive, user-centric ateps to process themselves though the eGates unattended. Behind the scence the passenger orchestration software suite under supervision of

authorities compares and verifies the passenger’s information embedded in the passport with a live facial and fingerprint capture and match while background checks are automatically conducted against INTERPOL, no-fly lists, and internal security lists.

A planned expansion will allow Argentinian citizens to use the national ID card and third country nationals to use ePassports at the ABC system to cross the border. Additional eGates are on track to be installed at Terminal A, with another two slated for Terminal C to process departing passengers.

With the number of air travel passengers expected to reach 7.6 billion by 2036, biometrics are emerging as the top solution for automating identity checks, according to a new report published by SITA.