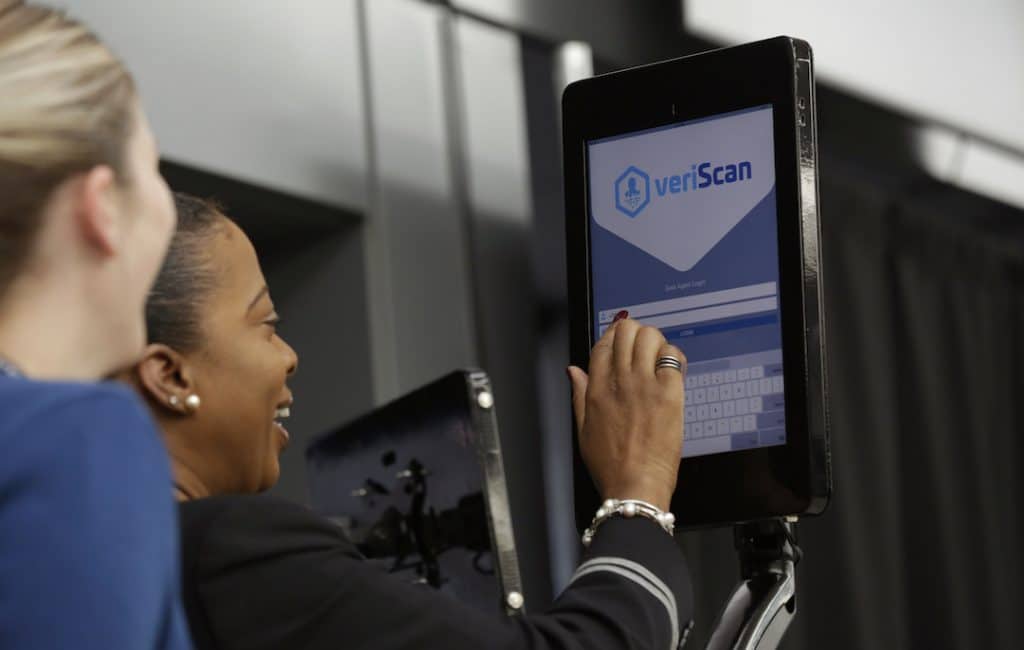 VeriScan is used at Washington Dulles International Airport to streamline passenger verification and enables paperless boarding, while meeting the requirements of U.S. Customs and Border Protection’s (CBP’s) Biometric Exit, according to the authority.

“When we set out to meet the congressional safety and security mandate, we took it as an opportunity not only to meet the biometric compliance standards, but to use it as a springboard to help create a better airport experience for our passengers,” comments Goutam Kundu, chief information officer for the Metropolitan Washington Airports Authority. “VeriScan has gained the attention and support of other airports and airlines because it’s cost-effective, extremely simple to deploy and allows passengers to board flights with ease.”

The authority says that veriScan flexibility and minimal requirements of a Wi-Fi connection and portable mounting device are a significant advantage over the significant space, large equipment and dedicated wiring and cabling required by other facial recognition systems.

VeriScan, which works with CBP Traveler Verification Service for near-instant identity verification, has been implemented with 38 international carriers in six U.S. airports, and has operated with a verification success rate of 98.5 percent.

Facial recognition boarding will be installed at three main airports in Japan before the 2020 Olympics in Tokyo to reduce wait times and improve security and boarding processes, writes Nikkei.

The technology was already installed at automated passport control kiosks, but now ticket and passport information will be registered at check-in so travelers will no longer have to show the documents in the process. The Japanese government wants 40 million foreigners to visit Japan in 2020.

The technology will be deployed at Narita and Haneda near Tokyo and Kansai near Osaka, with a total spend of around 3.2 billion yen ($29.2 million). It will be covered by a departure tax collected from tourists as of January. Starting with the new fiscal year, the tax will go up 8 percent, to some 54 billion yen ($492 million).

NEC announced the selection of its biometric technology for curb-to-gate identification for Narita International earlier this year.

The Japanese government is considering electronic tags on checked baggage to announce baggage waiting times on a smartphone app or display, and launching a preclearance program for immigration passport control before departure to Japan. The pilot will roll out for Taiwanese travelers going to 13 airports in Japan.

Jamaica’s airports will also be equipped with facial recognition technology as the country is adding 15 automated immigration kiosks at the Sangster International Airport (SIA) in Montego Bay, St James, according to St. Lucia News Online.

Tourism Minister Edmund Bartlett believes this will deliver a seamless travel experience for tourists arriving during winter, as the country is expecting more than 2.68 million stopover arrivals. Jamaica has turned to smart tourism by developing innovative tools and strategies to enhance traveler experience.

“The future of tourism is predicated on technology and this move today which is a continuation of the development of a smarter tourism experience and particularly, smarter airport arrangements to facilitate seamlessness in visitor entry experience in our destination,” Bartlett said.

When passengers arrive at the kiosks, they introduce immigration cards in the machine, after which they can move on to customs and luggage.

“This use of technology to create a smarter entry into the destination is also going to position Jamaica as the leading destination in the Caribbean in so far as smart tourism is concerned. We are looking forward to not only this automated immigration facility but also the E-gates that are coming, the elimination of paper base and more digital arrangements for immigration. The final stage will be facial recognition which will make Jamaica the most technologically savvy destination as it relates to point of entry,” he added.

Swedish watchdog to engage with police for pilot

In Sweden, the Data Inspectorate will be meeting with the police to consult on how to start a facial recognition pilot at border inspection at Skavsta airport, the institution writes (as per Google Translate). The system involves placing a camera at border control to take a picture of the traveler. Biometric facial recognition is then used to match the image taken with one stored in the passenger’s passport.

But to carry out the project, the legislation needs to be reviewed and the technology tested first for the process to be done in a legally secure and non-discriminatory manner. The Data Inspectorate believes under the current legal framework, Swedish police can’t run tests with sensitive biometric data.

“Our assessment is that the police have a clear need to carry out the intended test, but in order to make this possible a change in legislation is required. That’s why we send our response to the police’s prior consultation for information to the government,” says Elena Mazzotti Pallard, a lawyer at the Data Inspectorate.

Under EU and Swedish law, the police can already run biometric checks at the border.