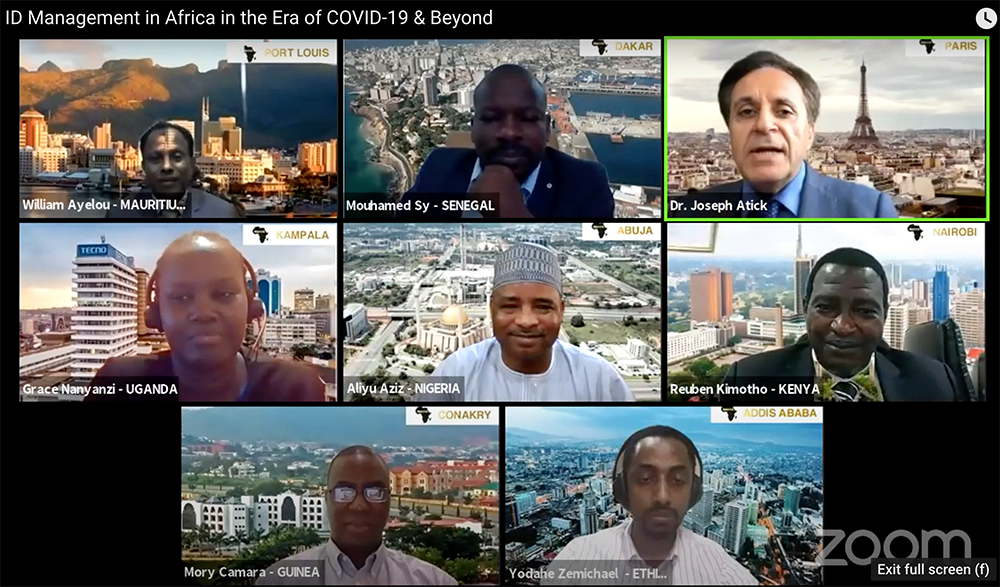 The COVID-19 pandemic has impacted biometrics-backed identity programs and exacerbated difficulties felt by Africa’s most vulnerable populations, but government identity authorities generally feel that their programs and funding will be maintained, according to a panel convened by ID4Africa.

The webinar on “ID Management in Africa in the Era of COVID-19 & Beyond,” the first in a series by the Movement for responsible provision of useful legal and digital identity for all people across the continent, featured many of the leading decision-makers in Africa’s digital identity ecosystem.

More than a thousand people signed up for the webinar, which was hosted on Zoom, but also broadcast to hundreds more through YouTube and the ID4Africa website, which now has a recording available.

Panelists participating were NIMC Director General Aliyu Aziz from Nigeria, and ANGEIE Director General and ID4Africa Identity Council (IIC) President Mory Camara of Guinea, Mouhamed Sy of Senegal’s CMU, Grace Nanyanzi of Uganda’s NIRA, Rueben Kimotho of Kenya’s NRB, William Ayelou from the Office of the Prime Minister of Mauritius, and Yodahe Zemichael from the Office of the PM of Ethiopia, who is part of that country’s nascent national ID team. The panel was moderated by ID4Africa Executive Chairman Dr. Joseph Atick.

Each panelist summarized the effects of the pandemic on their country and its identity programs, and engaged in a lively discussion that began with the safety of contact fingerprint systems. Different processes and options for biometric enrollment were presented, and the possibility of using other modalities considered. Modalities such as facial recognition, however, involve a number of hurdles, including lower mobile phone penetration than in the world’s wealthiest countries, and a lack of data protection law. Mauritius data protection law, for example, considers fingerprints to be protected personal data, but does not deal with other modalities, Ayelou explained.

Zemichael noted that Ethiopia is attempting to differentiate between those applications and processes which require strong user authentication, and those for which measures like one-time passwords (OTP) and “soft authentication” will suffice. Different challenges relating to enrollment and authentication were also pointed out by panelists.

The funding behind national ID programs is considered safe, for now, though Camara warned of possible long-term risks due to broader economic challenges, and Nanyanzi said that the prioritization of health activities could affect Uganda’s identity initiatives. In terms of public motivation, Sy argued that government capacity to deliver digital services is what determines people’s desire to enroll and participate in identity programs.

Attendees exchanged links to online information in response to each other’s questions, and picked up on points raised by the panelists. Many questions focussed on the potential and challenges of using mobile devices for enrollment and authentication, the state of the art in contactless fingerprinting, and safe cleaning of contact fingerprint scanners.

ID4Africa has announced the next webinar in the series, on “The Identity for Development Agenda in the Era of COVID-19” for June 17, 2020 at 2:30pm CET. The panel will include experts from the World Bank, the Center for Global Development, and several UN bodies.