Politics, bureaucracy and logistics might be delaying the world’s first multilateral border crossing program, but the concept, once it moves forward, has the potential of being the most effective eID implementation ever implemented.

The eventual deployment of the CARIPASS program will facilitate quick, secure travel between Caribbean countries. With the introduction of CARIPASS, the 15 participating governments in the Caribbean Community (CARICOM) aim to enhance regional security and support expedited travel throughout the entire region.

To participate in CARIPASS, eligible travelers will be required to pre-enroll at local immigration offices, and have a facial image and two fingerprint images captured. Users will then be issued a card with a 2-D barcode which they can use to electronically process through self-service border crossing gates. 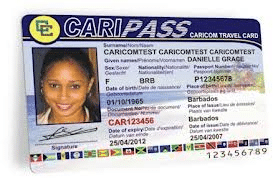 These gates will be connected the system’s user database, and after matching the user’s biometric data with that on the card, the gates will open, allowing the traveler to pass through. The gate will then print a receipt for the traveler to document his or her valid entry.

Given that the CARIPASS uses biometric technology to match the cardholder against the information within the CARIPASS system, the cardholder must be a minimum of 16 years of age. One reason for the age requirement is that biometrics, such as fingerprints and iris shape can change with age.

CARIPASS will utilize a number of technologies sourced and integrated by 3M in response to CARICOM’s needs, allowing travelers to move quickly between multiple CARICOM nations, including Antigua and Barbuda, Barbados, Dominica, Grenada, Guyana, Jamaica, St. Lucia, St. Kitts and Nevis, St. Vincent and the Grenadines, and Trinidad and Tobago.

The video below demonstrates the use of the gate, along with footage of a 3M mobile ID reader which will be used at CARIPASS border crossings where there is not ample space for a self-service border crossing gate.

The eID card will be designed to supplant passports for travelers within the CARICOM zone, but citizens of CARICOM member nations will still need passports in order to apply to participate in the CARIPASS program. As with any type of travel to another country, immigration officials will still have the right to perform random checks when deemed necessary. CARIPASS holders therefore have to comply with the directions of immigration officials at points of entry.

Although the CARIPASS system was projected for launch in 2009, several challenges have affected this initial timeline. Installation of the system began in November 2010. Media coverage of the progress of the project reflects several launch dates, including January and July 2009, and July 2010. The CARICOM Implementation Agency for Crime and Security (CARICOM IACS), the agency responsible for the system’s implementation last publicly predicted that the system would be implemented in 2011.

While the Caribbean Community anticipates the acceptance of this eID travel credential by all CARICOM member states, many launch dates have passed without implementation. A skeptical Caribbean public suspects that lack of political direction at CARICOM, might be causing the delay of CARIPASS.

Logistical issues however might be the main issue affecting implementation, which include the installation of the technology by departments and agencies of multiple countries at multiple port-of-entries, along with the variances in requisite communication links to support the technology that differ from country to country. Another point of contention is the proposed, non-refundable fee of US$150 for a one-year pass and US$250 for a three-year pass. While the fees are designed to cover administrative costs of running the system, the cost of the pass is in addition to the cost of a passport which is still necessary to have for CARIPASS applications, which makes the prospect of applying for the CARIPASS very expensive in a region that is mainly composed of developing countries.

Despite all these problems, CARICOM has purchased and installed the equipment, so there is a firm expectation that the system will eventually be placed online. Once the system is enabled, the Caribbean will be first major regional bloc to use an eID implementation to speed international travel and trade.