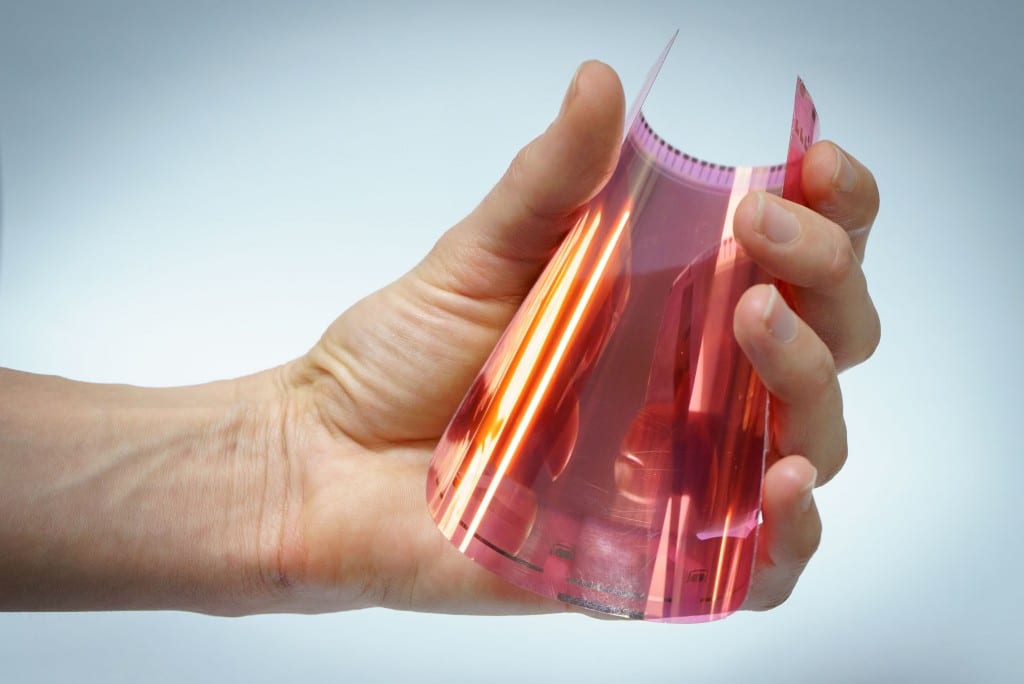 This is a guest post by Dr. Rouzet Agaiby, Senior Business Development Engineer at FlexEnable.

A large percentage of existing fingerprint sensors on the market use silicon technology due to its maturity as well as its established supply chain. Capacitive sensors have been the dominant technology because they allow compact fingerprint sensors in comparison to the main alternative approach of optical fingerprint sensors, which have been more bulky due to the optics used to de-magnify and focus the image. More recently, some companies have created a new generation optical fingerprint sensors that are built from large area amorphous silicon transistor arrays on glass that don’t need the bulky optics, because no demagnification is required. These arrays can be manufactured on existing FPD (flat panel display) manufacturing lines, but like a display, the resulting large area sensor is glass-based, limiting the robustness, flexibility and light-weight attributes of the sensor module.

Flexible fingerprint sensors can add value to biometric applications by providing solutions that aren’t possible with amorphous silicon sensors. Apart from being thin, light and shatterproof, a flexible fingerprint sensor can enable curved large area sensors that can image five fingers in a single acquisition without requiring the floor space of a palm sensor; they offer cost reduction benefits too. Moreover, flexible sensors can be seamlessly integrated around tight curves like automotive steering wheels, door handles and other consumer electronics devices, opening the door to new markets and use cases. Flexible sensors are also easier to integrate into smartcards, which is another emerging market for biometric applications.

One of the key criteria when selecting a fingerprint authentication system for border control or law enforcement is the speed of acquisition of the subject’s fingerprints. The increasingly common requirement to acquire all ten fingerprints means that with existing technology the officer needs to capture at least three separate images per user, four fingers on the left hand, four fingers on the right hand and the two thumbs. If the large area sensor can be curved so the user can put all their fingers around it, this would only require a single acquisition per hand which would save border control and law enforcement officers precious time when registering a lot of people. Additionally, light, thin and robust flexible fingerprint sensors can open up new markets like handheld units that can be used by officers on the go or in remote locations for citizen registration.

Flexible fingerprint sensors and the IoT

A lot of companies are focusing their goals on developing products and services that enable the Internet of Things (IoT). In IoT applications where user security is needed, seamless integration of fingerprint sensors will help overcome the security challenge while offering users a smooth experience – users won’t need to be constantly prompted for their information as authentication will happen automatically. A survey by Evans Data found that biometrics is rated as the most secure solution for mobile apps when compared with hardware/software encryption or NFC authentication. It also highlighted that fingerprint scans are easier for the user than iris scans or facial recognition. Imagine devices that can recognize or authenticate their users when just held or touched. This could be a car starting when the driver touches the steering wheel, a phone recognizing the user when held or a payment gets approved when the user picks up their smartcard. These applications are only possible if the fingerprint sensors are seamlessly integrated into the device and flexible sensors can enable this sort of structural electronics.

The infrastructure for silicon based sensors is an established one, and buyers have several sourcing options and the power to negotiate prices. In contrast, flexible fingerprint sensor technology is very new and there are just a few players on the market, like FlexEnable, who are still establishing their supply chain from the raw materials suppliers to full module assembly. Demonstrating demand for this innovative technology and finding early adopters will be important for accelerating its transfer into products.

As the demand for flexible sensors increases, players in the supply chain will be able to get return on their investments in the technology and secure market share. Companies looking to tap into new markets or become leaders in their own market must be open-minded and innovation-driven when it comes to flexible sensors. By supporting flexible fingerprint sensor providers, through investments in product development and field tests, they can be in the unique position to create groundbreaking products and shape their own markets.

30 Replies to “Flexible fingerprint sensors: a game-changer for biometric applications”