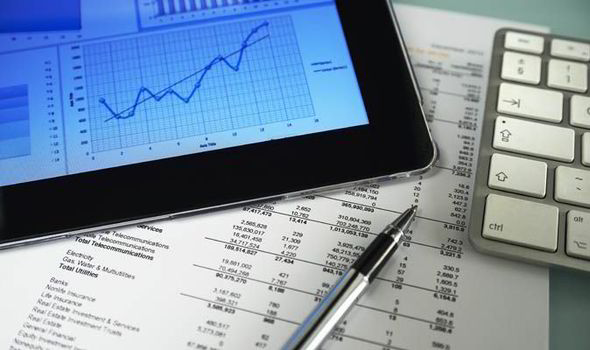 The global market for biometric sensors was valued at US$802.2 million in 2015 and is projected to expand at a compound annual growth rate (CAGR) of 8.3% between 2017 and 2025, according to Research Cosmos. The growing proliferation of smartphones, watches, and another smart wearable devices with features including fingerprint scan, iris recognition, palm scan and face identification are expected to be major factors driving the growth of the global biometric sensors market over the foreseeable future.

The demand for biometric sensors is anticipated to surge over the next eight years, as biometric authentication applications expand to luxury cars for better driving experiences. Increasing demand for advanced security measures is also contributing to the positive development of the market. Financial institutions are focusing on biometric alternatives for authenticating mobile banking to improve simplicity and security. Increased application of biometric technology in post-secondary education, commercial centers, offices, and research institutes will also stimulate the growth of the market.

According to industry published figures, there are now 7.186 billion chip cards issued by banks globally. This figure is based on 2017 statistics reported by EMVCo.

Supported by dozens of banks, merchants, processors, vendors and other industry stakeholders, EMVCo is a global technical body that facilitates worldwide interoperability and acceptance of secure payment transactions by managing and evolving the “EMV” specifications and related testing processes.

EMV is a payment method based upon a technical standard for smart payment cards and for payment terminals and automated teller machines that can accept them. EMV cards are smart cards (also called chip cards or IC cards) that store their data on integrated circuits in addition to magnetic stripes (for backward compatibility).

These include cards that must be physically inserted (or “dipped”) into a reader and contactless cards that can be read over a short distance using near-field communication (NFC) technology. Payment cards that comply with the EMV standard are often called Chip and PIN or Chip and Signature cards, depending on the authentication methods employed by the card issuer.

Deployment of EMV is experiencing wide adoption rates worldwide with a 85% adoption rate in North America and over 70% in both Europe and Africa in 2017.

A growing number of companies are also beginning to offer EMV cards integrated with biometrics, including SmartMetric and Gemalto.

According to ResearchAndMarkets.com, the Saudi Arabia biometrics market is projected to cross $52 million by 2024.

Projected growth in the construction market, upcoming hotels and shopping mall projects, coupled with increasing foreign direct investment (FDI) inflow in the construction and retail sectors are expected to emerge as the key driving factors for the market growth.

In terms of technology, the fingerprint recognition segment accounted for the majority of the market revenue share on account of supportive infrastructure and surging installation in various applications throughout the country.