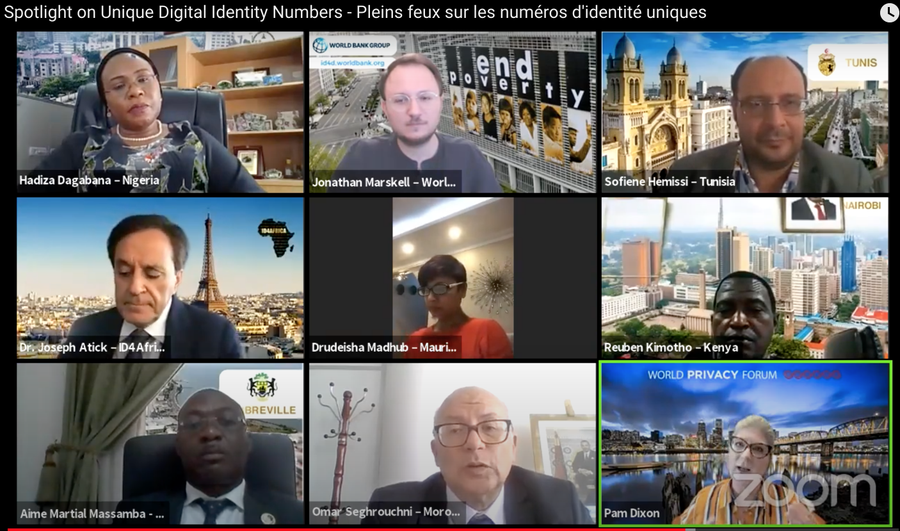 Should national identity schemes, biometrics-backed or otherwise, use a single unique digital ID number to identify people for different services, or a different number for each service? This was the question posed in ID4Africa’s fourth webinar in a series to identity experts from African governments and the World Bank.

The panel webinar titled ‘Spotlight on Unique Digital Identity Numbers’ was hosted by ID4Africa Executive Chairman Dr. Joseph Atick, and joined by hundreds of attendees on Zoom, with more than 100 additionally watching on YouTube, and a replay available from ID4Africa’s Knowledge Hub.

As in the three webinars recently put on by ID4Africa, the audience consisted of identity exerts and stakeholders from around the world, and across Africa in particular. A poll of the audience near the outset showed roughly two-thirds believe a UIN is preferable to sectoral identity numbers. The chat was a mix of further information in support of the speakers’ points, discussion of related technical and legal matters, and reaction to the panelists’ points.

Jonathan Marskell of the World Bank delivered a presentation on the relative merits of both approaches, including how universal identity numbers (UINs) can help streamline and speed up processes, and risks to personal data security and of surveillance. Breaches involving such systems are often not breaches of the central identity database at all, but rather from the databases built by service providers who identify customers by their UINs, as has been the case several times with Aadhaar. While these breaches generally do not risk exposure of biometric data or the full account information, they can still expose information which can be used in fraud, and introduce difficulties into people’s lives, Marskell point out.

Omar Seghrouchni of Morocco’s CNDP, Hadiza Dagabana of Nigeria’s NIMC, Drudeisha Madhub of Mauritius’ DPO, Aime Martial Massamba of Gabon’s MOI, Reuben Kimotho of Kenya’s NRB, and Sofiene Hemissi of Tunisia’s Ministry of Local Affairs each shared information on how each of their countries implements identity numbers in their national scheme.

They described systems with and without UINs, and different ways of either connecting the UIN to agencies and services to enable service delivery without risking exposure of the individual’s private data, or of connecting sector-specific identity numbers in the system’s back end.

Despite a range of approaches, a general trend in direction can be observed. Nigeria is moving into tokenization and enabling individuals to control their identity for interactions with specific sectors, Dagabana says. Madhub reports that Mauritius is moving beyond tokenization into anonymization, so that the UIN can be used without sharing the individual’s data. Hemissi says Tunisian links sectoral numbers, and may attribute a UIN to link them together, but in the meantime has launched a tool for people to find out who has accessed their government identity information.

Seghrouchni suggested the question of whether to use an UIN is a technical one, and that interconnection between different areas of the system is the important issue. Massamba emphasized the practical impact of connectivity on identity system design in his closing remarks, while Dagabana and Kimotho both reiterated the importance of making sure sound legal frameworks are in place. Hemissi said that in Tunisia, establishing a consensus among stakeholders is the biggest challenge for the system.

The webinar also included several new innovations in the series, including translation between English and French (as at the Movement’s annual meetings) and the new “Community Voices,” in which members of the audience were invited to raise a virtual hand to briefly join the panel to ask a question or make a point. Pam Dixon of the World Privacy Forum and Anita Mittal of the World Bank joined the discussion at different times to make points about what makes identity systems sustainable, and potential issues with tokenization of identity numbers, respectively. Professor Abderrazak Henni of Algeria joined the discussion to share insights from that country’s identity system.

A poll held at the end of the event showed nearly the same result as the one at the beginning, but with a slight uptick in support for UINs.

The next webinar from ID4Africa will be held on September 3, 2020, featuring an expert from the U.S. National Institute of Standards and Technology (NIST) in a discussion spotlighting facial recognition.