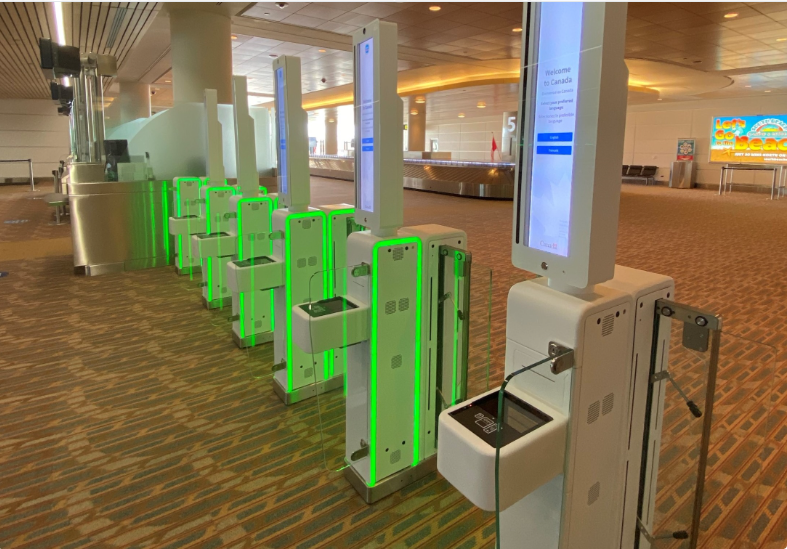 The NEXUS program is operated by the Canadian Border Services Agency (CBSA), expediting border crossings for pre-approved Canadian, American, and Mexican citizens with enrolled biometrics. Those travelers pass through special reserved lanes at airports for entering the country.

The program normally uses NEXUS kiosks, and Vision-Box says in the announcement the deployment is the first of ABC biometric eGates for NEXUS. The GT-11 eGates are part of the newest generation of digital identity systems from Vision-Box, and have a smaller footprint than NEXUS kiosks. The eGates are part of the modernization process for Winnipeg International Airport which seeks to provide seamless traveler journeys from curb to flight boarding, according to the announcement.

“Finding better ways to serve the needs of travellers is paramount for Winnipeg Airports Authority,” states WAA President and CEO Barry Rempel. “Adding Vison-Box eGates for NEXUS users at Winnipeg Richardson International Airport not only enhances the customer experience but sets the foundation for future innovation and brings us one step closer to seamless, touchless passenger travel.”

The software for the eGates, like Vision-Box’s Orchestra Digital Identity Management Platform was installed remotely, due to limitations imposed by the COVID-19 pandemic.

A single token traveller identification system based on face biometrics is being planned for Kuala Lumpur International Airport (KLIA) and other facilities in the Malayasia, as the country plans to digitize its processes for faster and more convenient passenger journeys, reports the New Straits Times.

Airport operator Malaysia Airports Holdings Bhd (MAHB) is planning to implement big data analytics and a single token facility for clearance at each airport touchpoint as part of its Airports 4.0 initiative. The operator also migrated KLIA to a new network infrastructure earlier this year.

In addition to potentially reducing operational costs, the new technology is expected to reduce service time at checkpoints from an average of 15 to 20 seconds to less than 2 or 3.

Varanasi Airport in India will use facial recognition to transition to paperless passenger processing by the end of the year, Nyoooz writes.

The announcement was made during a virtual review of civil aviation projects in Uttar Pradesh, which focussed on the need for infrastructure development at three other airports to be accelerated.

Varanasi Airport is in the political constituency of India’s Prime Minister Narendra Modi, and would become one of the first in the country run by the Airports Authority of India (AAI) to launch paperless processing. Four airports were approved for paperless entry with facial recognition under the Digi Yatra program, through a contract with NEC Technologies India.

Hong Kong International Airport has received Airport Health Accreditation (AHA) from Airports Council International in recognition of its alignment with ACI guidelines and ICAO recommendations for COVID-19 safety, according to Airline Geeks, in part for its use of biometric facial recognition in delivering contactless experiences.

Other measures in the assessment process include sanitization with autonomous cleaning robots, provisions for social distancing, and passenger communications.

Airline Geeks reports Hong Kong is the first airport in the Asia-Pacific region to receive the accreditation, which has also been granted to Miami International Airport, Istanbul Airport and London’s Luton Airport.

“A harmonized approach to health is key not only to the recovery of civil aviation but also to ‘building back better,’ which is crucially important to ensuring the future resilience of the aviation network,” says ICAO Council President Salvatore Sciacchitano.

DC non-profit Keeping IDentitites Safe has declared that all 50 U.S. States are now compliant with the federal REAL ID regulation, and at the same time congratulated the Transportation Security Administration (TSA) for deploying Credential Authentication Technology (CAT) scanners to all major airports in the country to validate REAL ID cards and passports.

“Nineteen years after the terrorist attacks on New York City and the Pentagon, the nationwide adoption of REAL ID security standards combined with TSA’s readiness to enforce a deadline is a high benchmark for state and federal coordination,” states Keeping IDentities Safe President Brian Zimmer. “TSA’s aggressive and effective deployment of CAT scanners, including the newest self-service stations, are accelerating the passenger inspection lines at airports. The new scanners are also catching would-be airplane passengers who present false IDs, and referring them to local police for fraud.”

Roughly a dozen states remain behind in their implementations, according to Zimmer.

TSA rolled out CATs to check for fraudulent copies of the biometrics-supporting ID documents at more airports this summer ahead of the deadline for travelling with REAL ID-compliant credentials in October 2021.