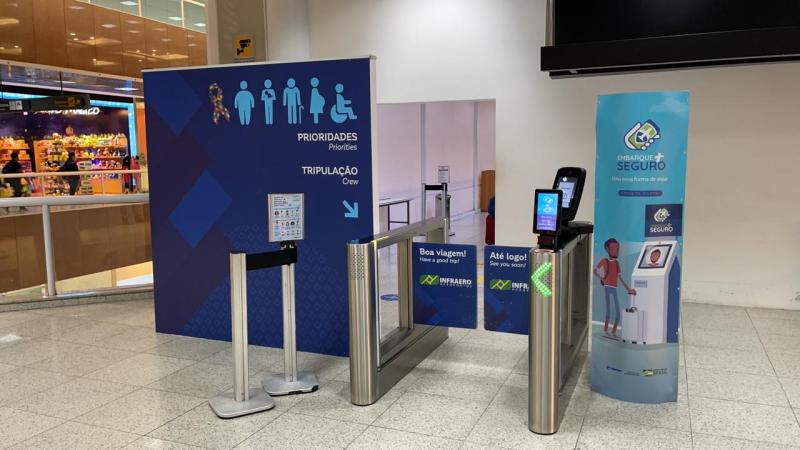 Brazilian airport operator Infraero and state-owned technology firm Serpro have concluded a technical cooperation agreement intended to see the production deployment of face biometrics at the airports of Congonhas in São Paulo and Santos Dumont in Rio de Janeiro. This will allow for accurate, rapid and secure boarding for passengers and crew members.

According to a press release by Infraero, the deal which was signed on February 11, 2022 will make the two airports the first in the country to have 100 percent biometric boarding for both passengers and crew when the system reaches operation by July.

The agreement for full deployment of the system comes after several months of trials which saw the participation of over 6,000 passengers travelling between Congonhas and Santos Dumont, and about 200 cabin crew members in the latest part of the trial which ran from November last year to January 2022. That trial included numerous biometrics providers, including Amadeus, Biomtech, Collins, Digicon, Gunnebo, Rockwell Collins, Pacer, SITA, Wolpac, Idemia, and Azul/Pacer.

Infraero says it will soon launch a call to tender for the selection of a firm to provide hardware for the of the facial recognition installation, and running a biometric ID verification engine developed by Serpro, within the 18 months duration of the technical agreement.

The release adds that the deal which has been reached thanks to collaboration between the Ministry of Infrastructure and the Special Secretariat for Management and Digital Government of the Ministry of Economy is within the framework of the 100 percent Digital Insurance and Boarding program which seeks to have biometrics deployed for boarding at all airports in Brazil by the end of 2022.

“The definitive use of biometrics in our airports is something really innovative, a great evolution in strategic theme for the airline industry. It ensures more safety for users, streamlines the procedures for boarding and accessing aircraft, reduces costs for companies, which will have fewer teams in these operations and shorter time with aircraft on the ground,” Marcelo Sampaio, executive secretary of the Ministry of Infrastructure, says.

Ronei Glanzmann, national secretary of Civil Aviation, said using biometric boarding for the most important air bridge in Brazil will clear the path for other airports to adopt the novelty.

To Serpro President Gileno Barreto, the partnership is a big step towards making the biometric boarding dream for airports in Brazil come true. “We are one step away from putting Brazil at the forefront of the airline industry. The technology, which combines data analysis and validation by biometrics, has been extensively tested and will ensure an innovative experience for all Brazilians.”

Explaining how the system works, the Infraero release explains that checks start with an airline attendant using a Serpro application to verify the passenger’s personal data, social security number and photo which is taken instantly. If cleared, the passenger can then be allowed access to the departure hall and then to the aircraft, passing through biometric gates, and this requires no further presentation of any ID document.

For crew members, their photo is collected and matched with the biometric database before they get access into the Security Restricted Area, to determine whether they are the right person.