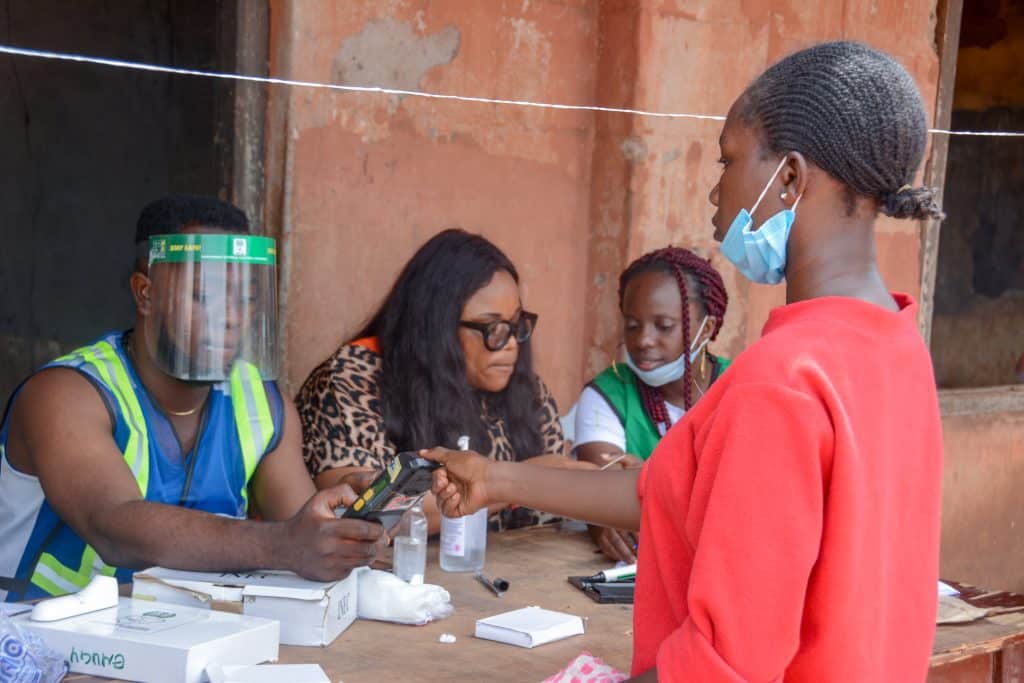 Young Nigerians make up the vast majority of almost ten million new registrants for the biometric Permanent Voter Card (PVC) ahead of the 25 February general election, although over a million registrations were found to be invalid, reports Al Jazeera. A presentation in London by the head of the election commission reveals the work going into making the election robust.

Of the nearly ten million new voters hoping to get hold of PVCs, 84 percent are under the age of 34 which is identified as a key part of the electorate as Nigeria approaches its first election since military dictatorship ended in 1999 where a third-party candidate is a threat to the current duopoly of parties. Some of Nigeria’s young population has also been inspired by the 2020 #EndSARS movement leading to the despised police unit being dispersed.

However, the Independent National Electoral Commission (INEC) has claimed that 1.12 million of the new registrations are invalid.

Previously, the Commission announced that it had printed nearly 14 million new biometric PVCs, although this figure also includes replacements and transfers. Issuing the cards in time is a concern for INEC, which has already extended the collection by a week to 29 January.

Crowds have been gathered at PVC collection centers such as schools, reports Aljazeera. Some people have been left disappointed as cards were not ready.

The bimodal (face and fingerprints) biometric voter accreditation system (BVAS) has been tested for governorship elections in several states. Results were highly mixed. The poll in Anambra State was deemed inconclusive and new registration centers were opened.

INEC had to postpone the 2019 election by a week as materials were not ready. Its own offices have recently come under attack, said Professor Mahmood Yakubu, chairman of INEC categorically denied there were any plans for a delay to this year’s elections of 93.4 million voters at 177,000 polling stations, when speaking recently at Chatham House in London.

Over 600,000 PVCs were collected over the last month alone in Lagos, the commercial capital, which had the largest number of uncollected cards in the country. No proxies are allowed this time

Yakubu spoke about improvements to planning, budgeting and authorities being better prepared in advance, in part due to the Election Act 2022. INEC has completed 11 out of 14 of its tasks to prepare, all so far on schedule.

“Perhaps the most important foundation for democratic elections: the registration of voters,” said the chairman, “You can’t have credible elections without a credible register of voters.”

When continuous voter registration ended last July, 12.2 million new voters had registered, of which 9.5 million remained after data was cleaned up. He put the surge down to the interest in voting among the youth, plus the innovation of pre-registration available online.

Publishing the updated electoral register online saved printing 9 million pages of names (the largest database of people in Africa), and led to a high level of very public engagement as people scrutinized the list. Fifty-three thousand names were annulled due to citizen action.

Complaints about underage voters led to a “line by line” examination of the register in 15 states, yielding 21,000 removals. With 37 million voters in those states, the figure equates to 0.06 percent “meaning that 99.94 percent of the register is solid,” added the chairman.

The chairman described the three crucial new devices. The INEC Voter Enrollment Device (IVED), which comes with a fingerprint scanner and the thermal printer to issue a temporary card. The next system is the INEC’s Bimodal Voter Accreditation System for the verification of voters and transmission of results.

Finally, the IREP, which is the INEC Result Portal. It gives the public access to results per polling station. This system was also used in the Continuous Voter Registration process.

Yakubu said the biometric reading machines were designed in house in Nigeria, but manufactured abroad. He said his engineers had also suggested using body odour biometrics in future: “I said ‘please, not yet – let’s make it slowly’!” recounts the chairman, preferring to keep to the technology already available.

The main opposition party in Sierra Leone, the All Peoples Congress (APC), is calling for disaggregated voter registration data as well as an independent audit of the registration process, reports Politico SL.

This demand followed the APC’s deployment of its own agents to observe voter verification and registration exercises. Their report stated that both exercises faced “self-induced challenges and were deliberately designed to create an unlevel playing field to disenfranchise a certain section of the electorate at the expense of our party,” as cited by Politico SL.

The APC lost the 2018 general election by a very slim margin.

Systematic issues in registration and verification mean that the previous cycle of voter registration led to missing, incomplete or incorrect records, according to the APC. They said many records had to voter photos attached.

The party is also concerned at the lack of transparency in voter registration management, particularly in the deletion of more than a quarter of a million voters or seven percent of the electorate which the ECSL categorized as deduplication.

Sierra Leonians go to the polls to vote for a new president on Saturday 24 June 2023.

Sierra Leone has recently announced a large hike in fees for the national ID card and plans to pilot a national ID scheme with MOSIP.