Innerscope Research has announced the results of its seventh annual study of Super Bowl advertising. The study, which took place in part at sites in Boston and New York yesterday during the Super Bowl, used a combination of biometric and emotional analysis.

According to Innerscope, “a game once dominated with ads focused on simple themes such as cheap humor and sex appeal has turned into a platform for developing more complex stories and emotions.”

“There were some tried and true creative elements that engaged such as using humor and celebrities to generate an emotional response,” Carl Marci, Co-Founder and Chief Scientist of Innerscope Research said. “However, there were some novelties and new emotional themes that emerged as viewers engaged with brands that focused on making a personal connection.”

Innerscope biometrically monitored 80 participants using technology to capture fluctuations in heart rate, skin conductance, and breathing patterns across two locations: the company’s Media Lab and facilities in Boston and the Time Warner Medialab in New York. In addition, participants were video recorded with Emotient, an expert in facial expression recognition and analysis. 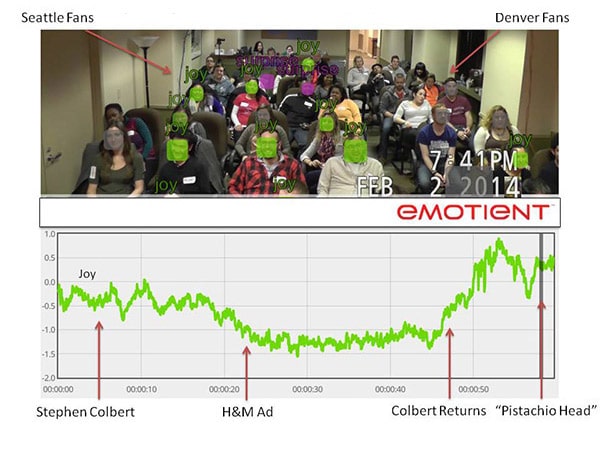 Among Innerscope’s top performing ads was the Wonderful Pistachios’ spot with Stephen Colbert as himself in a “pitch-and-catch” ad that drew smiles from the beginning for the brand. But spots with celebrities in general only comprised two of its top 10 ads. Other noteworthy mentions from Innerscope include brands that took audiences on an emotional journey, such as Cheerios, Chevrolet, Budweiser and Hyundai.