This is a guest post by Francis Mather, Director of Computer Vision at Hoyos Labs.

Security is now one of the most preeminent global issues. As concerns about international and domestic threats grow, one of the most oft-mentioned techniques to ensure safety is the use of background checks.

Developing an efficient and effective fingerprint biometric system has never been more essential. Preliminary findings demonstrate the capability of a new, proprietary fingerprint biometric system, 4FingerID (4FTM), to produce high quality matches against prints acquired using flatbed fingerprint scanners. The 4F technology requires only a smartphone’s rear-facing camera and its flash to capture multiple fingerprints simultaneously and, as such, opens the door to portable, cost-effective matching against existing legacy databases held, for example, by government bodies. 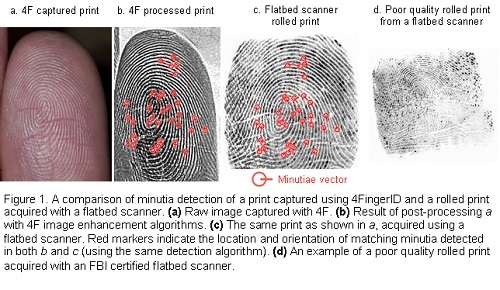 The images in Figure 1 show that 4F print quality is comparable to an FBI-certified, $2,000 fingerprint scanner and that 4F data (templates of minutiae location and orientation) can be directly matched with those from such devices (Figure 6.1). This is made possible by 4F pixel densities exceeding 500 ppi per finger, combined with advanced image post-processing of flash illuminated prints. In addition, due to the contactless nature of capture, 4F prints may be of greater consistency, as there is no reliance on the correctness or quality of contact, no requirements for device cleaning between captures and no detrimental fingertip deformations that can affect print geometry (Figure 1d).

Further tests on large fingerprint datasets are in progress and include smartphone-based thumb capture. Preliminary results from these tests show that 4F will be able to provide identification against legacy databases.

It seems, therefore, that 4F will be the only technology in the world that can remove the necessity of relying on expensive specialists using select hardware, enabling law enforcement in the field to use a single, all-in-one device – or schools / employers to run cost-effective, on-site background checks – using only a smartphone and four-finger biometric.