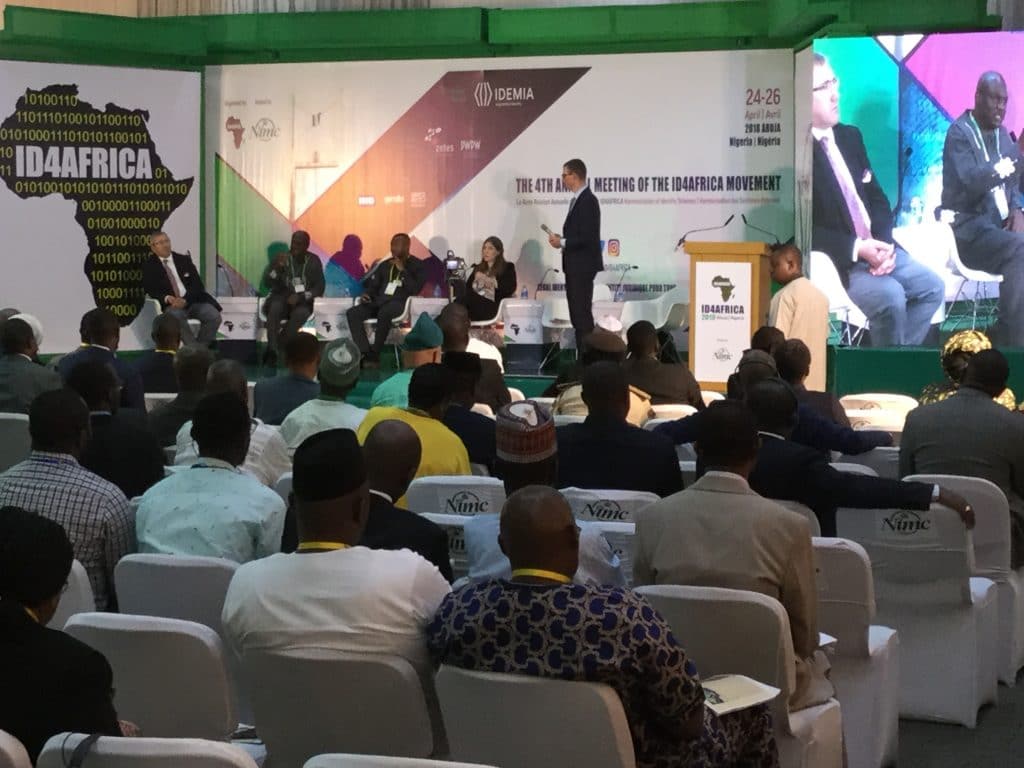 The second day of the annual conference of the ID4Africa movement featured passionate addresses on a wide variety of topics related to digital identity, and robust dialogue during panel discussions, question and answer periods, and informal settings around the Abuja International Convention Center. While many theories on best practices were shared, case studies, progress reports, and the majority of conversations dealt with achieving practical aims in reaching UN sustainable development goal 16.9 to establish legal identity for all.

The program consisted of a series of “InFocus” and “DigiHealth” sessions made up of six tracks presented four in parallel. The tracks include a range from one to four sessions each, for a total of sixteen sessions, as well as time designated for networking and visiting identity product and service providers in the exhibition hall. The tracks covered the themes of foundation, reform, borders, ID technology, democracy, and health, with the latter presented as a self-contained conference running in parallel and open to all ID4Africa 2018 attendees.

Alban Feraud, SIA Standards Taskforce Representative for the Secure Identity Alliance and ID4Africa premier sponsor IDEMIA, delivered a presentation on “Standards at the Service of Sustainability and Interoperability of ID Systems during a morning session in the “eReform” track on “Harmonization: Foundation of Reform.”

The event’s other major sponsors include Zetes, from which Solution Architect Dr. Extase Akpotsui gave a speech on “Improving Governance using the Population Register as an Authentication Source,” and GenKey. On the first day, GenKey CEO Michiel Loeff spoke about how identity authorities can reuse data collected with the substantial investments they have made in biometric ID for different government departments and to generate know your customer (KYC) profiles to strengthen online identification verification, such as for the financial sector.

In response to a question from the audience on the political rights of displaced persons during the “eDemocracy” session “ID & Democracy Part I,” Patience Fule-Buang Elango of Cameroon’s electoral commission (ELECAM) pointed out that they could still vote if they can prove their identity and access a diplomatic posting, in just one example of the dialogue on practical concerns.

During a session in the “eReform” track on financial inclusion, Credence ID CEO Bruce Hanson advocated for countries to invest in multimodal biometric systems. “If you are going to put your population through the trouble of a mass enrollment process, you might as well get as much as you can,” he said, and pointed out advantages such as cost efficiency and increased security. This position is notable due to a significant split between single modality and multi-modal biometrics systems among African countries.

In the same session, Ounzuba Kemeh-Gama, Technology Consultant and Project Manager for the Central Bank of Liberia, described a system which has been building credit history for previously excluded Liberians. The system leverages a facial biometric ABIS system to establish identity and creates a credit score with biographical information for newly banked individuals. The Liberia Unique Credit Information Application (LUCIA) can then be linked with the individual’s National Identity Registry number, establishing a way to reference the person’s credit history.

Sergey Yesileyev, Co-owner and Business Development Director of Government eID Solutions for X Infotech, summed up one of the day’s often-expressed sentiment during an eReform panel on “Digital Transformation of Services,” when he noted that with digital transformation “the system behind the identity document becomes more important than the document itself.”

Biometric Update’s coverage of ID4Africa 2018 from Abuja, Nigeria as the event’s Official Journalist will continue through the conference’s conclusion, and with a series of feature articles following up on highlights and major insights from the movement’s annual event.