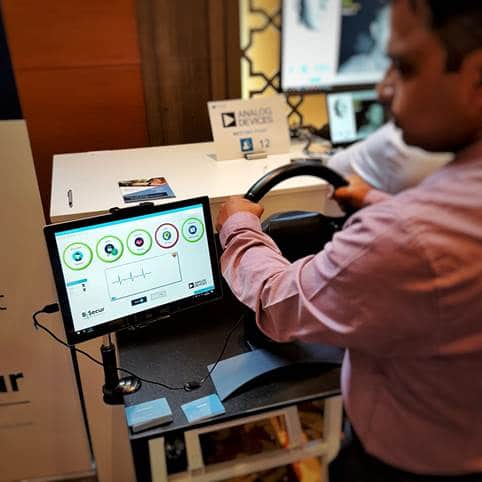 B-Secur CEO Alan Foreman is meeting with four major U.S. auto manufacturers to pitch the inclusion of the company’s EKG biometric technology in cars and other vehicles to support driver authentication and a range of heath and wellness-related applications.

Foreman told Biometric Update in an interview that biometric identification, authentication, and verification are all possible using the electrical signal generated by the heart. B-Secur is working to produce data on how well the technology works for these purposes, but is focussed on applications that go beyond those capabilities.

“The premise is that the versatility of EKG biometrics potentially means it has many more applications then external biometrics,” Foreman says. “We’re not just talking about authentication.”

While what Foreman refers to as “first-generation biometrics” have popularized the concept of biometric authentication for convenience and security, EKG biometrics can offer those benefits along with detection of wellness factors such as stress levels and fatigue, and health factors, such as stroke risk. B-Secur provides these capabilities through different EKG algorithms embedded in chips by its semiconductor manufacturing partners, including Cypress, NXP and Analog Devices.

“Eight or nine years ago the computing power required to take that single and generate a quality noise-proof signal, filter all of that out, and then reflect that in your template that you’ve previously enrolled, was pretty difficult,” Foreman explains. “Not today. We’re doing that on a very small chip.”

The chips are embedded directly into products like wearables or auto systems, with no extra hardware, as B-Secur software relies on signals that can be detected through numerous common materials that are sufficiently conductive.

“The ability to use more commonly available conductive surfaces to capture a signal is one of our USPs for EKG. We don’t need an expensive piece of hardware.”

The example he gives is a Bosch steering wheel, in which B-Secur changes out ECU (engine control unit) to embed its algorithms, with a lead running left and right for the driver’s hands to complete the circuit. The leather cover is conductive enough to deliver the signal to the leads.

Wellness monitoring could potentially save lives on the road. Foreman says that an estimated one in six traffic fatalities in the UK and U.S. are associated with driver fatigue. B-Secur’s technology can accurately predict when a driver is roughly three minutes from nodding off behind the wheel, according to company testing. Carmakers have already developed warning systems, such as Chrysler’s rumble system, but do not yet have sensors to detect fatigue.

In addition to collecting health and wellness data and not requiring dedicated hardware, EKG biometrics also provide identification continuously, and with liveness detection, according to Foreman. Along with medical grade EKG data, the user is accurately identified, or verified if pre-enrolled, in about 30 to 40 seconds, or heartbeats.

Under Armour has already built B-Secur’s biometric technology into some of its clothing, and the company plans to address the wrist-worn wearables market through its partnership with Cypress.

B-Secur has entered its early revenue phase, and its algorithms will be embedded in multiple 2020 models of European luxury cars. Foreman says it has not yet done much business in the U.S., but many companies have “cabin of the future” programs that are considering advanced technologies to deliver applications for wellness and comfort. B-Secur’s partners also supply roughly 80 percent of the auto supply chain, according to Foreman, and he is optimistic that more companies will follow Daimler and Jaguar Land Rover, who he says are auto industry leaders in EKG biometric integration research.

Some companies in the auto industry have experimented with different ways of implementing EKG systems, such as on the floor of the car, but with limited success.

“The car manufacturers recognize the benefit of having EKG technology, but they’re struggling to find the right format,” Foreman says. “It’s expensive to do it through the feet; it’s very hard to get a quality signal.”

If EKG biometrics are widely implemented in wrist-worn wearables and cars, the trove of data collected from end-users could potentially also be invaluable for medical research, Foreman points out.

“You pretty much capture everyone in the western hemisphere’s health data, and the ultimate nirvana for the likes of Google and Apple is to collect people’s health data throughout the whole day.”

That point may be some time off, but with the expected growth in biometric driver identification systems, and the added appeal of health and wellness tracking, heartbeat electrical signals may soon join “first generation biometrics” in the mass market.