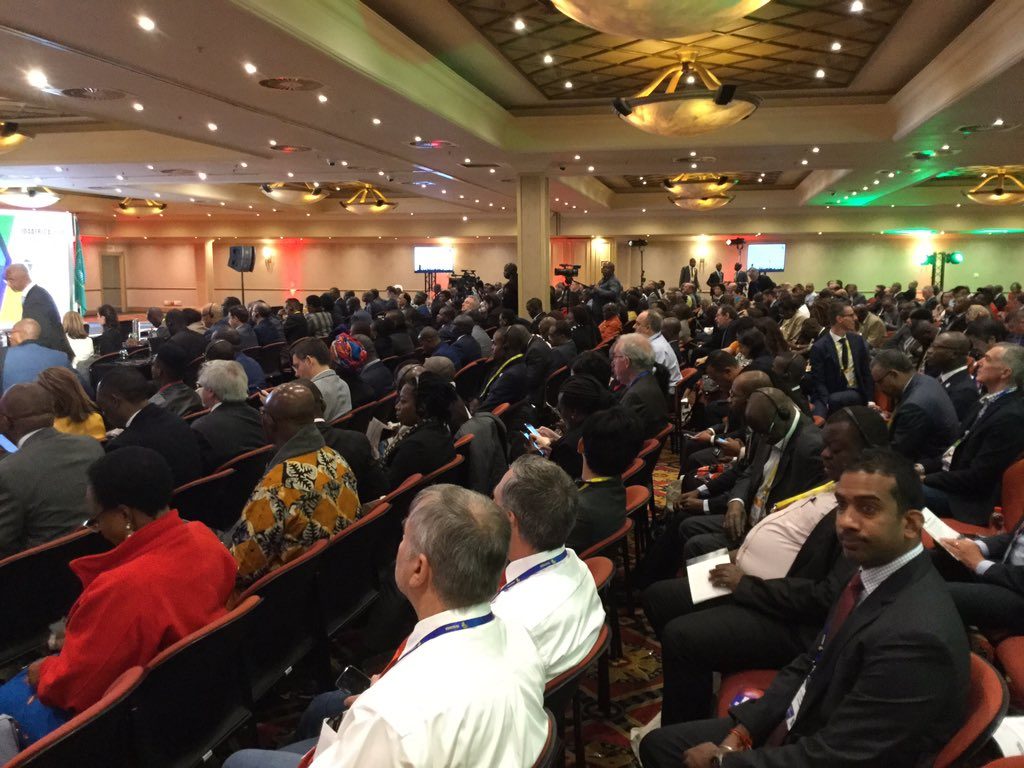 Digital identity themes, challenges, problems and progress came to the fore in Johannesburg as delegates from African governments, international agencies and biometrics solutions providers took to the stage for the first day of ID4Africa.

A series of sessions from government agencies running large ID projects across the continent such as Kenya, Nigeria and South Africa, plus debates between international organizations on clarifying differences and reach consensus on sector issues, along with unexpected advances from biometrics vendors brought about some clear themes. Presentations focussed on humility, avoiding vendor lock-in, identifying risk, taking local and Pan-African control, gender equality, the inclusion of refugees as well as economic migrants and the stance that the challenge for Africa is no longer technical, but political.

After the ID4Africa theme song and the South African and African Union anthems had played, Dr. Joseph Atick, ID4Africa’s executive chairman, set the tone for the day with his assessment of the five major challenges facing the digital ID movement in Africa, with the aim of fostering debate. “Identity systems continue to be politicized in many countries across the continent. We see smear campaigns in the media lambasting the negative consequences,” said Atick as much an admonishment as a statement of challenge. “That’s why we recommend countries engage in transparent national dialogue before they launch identity systems – dialogue that brings representations from all sectors to work on a non-political technical committee under the supervision of a steering committee representing all political stakeholders.

“We also specifically recommend working in partnership with civil society in order to ensure informed public buy-in and guard against political manipulation of ID systems along the way. Let’s work together to recognize identity as a right, and discourage making it a political tool.”

Atick also warned of the lack of capacity and upcoming brain-drain for governments who train civil servants in biometrics and ID only to lose them to the international private sector. Budgets are needed to bring in more young people and keep them.

“The identity agenda still does not start with data protection and privacy. If feels like the subject is an afterthought. This is dangerous. We need privacy by design from day one,” said Atick, calling on identity authorities to enter a new kind of dialogue at the Roundtable of the African Data Protection Authorities (RADPA) to be held later in the day. Atick also warned of the issues of gender equality in the identity authorities and even with ID4Africa community.

Finally, he criticized the slow progress in improving border crossing and travel for Africans and within Africa, appealing directly to the immigration authorities present in the room, urging them to adopt visa-on-arrival policies.

Echoing Atick’s remarks, Aaron Motsoaledi, Minister of Home Affairs for host South Africa, said, “We have a monopoly in the services we provide because no other institution does what we are doing and hence we have to do it with diligence and expertise,” warning how big an impact the documents issued by identity schemes have on people’s socioeconomic welfare.

His counterpart, Naledi Pandor, Minister for International Relations and Cooperation, captured the full attention of the assembly and continued the theme of government humility despite South Africa’s role-model progress in registration: “we make an error if we assume that our people understand what we’re trying to do when we seek to register them, and community participation has to be an important cog of the undertaking”.

She received applause when she mentioned the need to extend ID schemes not just to refugees, but economic migrants, a highly controversial stance when the issue is currently so politicized in South Africa, and a key campaign issue in the recent election. “One of the gaps that we do confront is the inadequate registration of those who come to find solace in our countries,” said Pandor, “We have been particularly inadequate in registering those who are asylum seekers or refugees or indeed economic migrants… Otherwise we render our people stateless on our continent, and that cannot be acceptable”.

Kenya’s Robert Mugo, Director of Shared Services at the Ministry of ICT which oversaw the controversial Huduma Namba scheme presented the government’s side to the scheme, listing acts which he believes created the groundwork for the project without the country actually having a data privacy bill, the NIIMS act which will be in place in “a couple of months”. “This project has become more than just a registration or identity project, it’s also bringing the country together,” said Mugo, before finishing with a warning from his team that others embarking on such projects must not surrender control to vendors.

Josephine Mukesha, Director General of Rwanda’s National Identification Agency (NIDA) impressed the room with her country’s achievements: 99% of Rwanda’s 12 million-strong population have been registered and biometric enrollment starts at age 16. The ID card generated is the one item needed to access healthcare, social protection, take high school final exams, vote and travel to and from neighboring Kenya and Uganda. The system is to be integrated with public key infrastructure (PKI) for online payments, forming a national payment system, which is also hoped to have the effect of motivating people to register for ID. Mukesha’s most head-turning announcement was Rwanda’s introduction of ‘real-time biometrics’ where a backend would be able to oversee all uses of biometric authentication and the people involved.

“Unique ID is the foundation of everything we do,” Aliyu Aziz, Director General of Nigeria’s National Identity Management Commission told delegates after detailing the demographic challenge of a country with a population of 201 million, growing by 7 million a year.

Aziz introduced the theme of foundational versus functional ID. The government could not afford the full-scale project, but had permitted one with an ecosystem of agencies rather than one single agency, capturing far fewer details which would allow foundational ‘Who are you?’ ID, rather than the functional ‘Are you eligible?’ ID system.

The first from the international agencies to speak was UNICEF’s Cornelius Williams who explained how legal identity from birth was a “game-changer” as youths can prove their age to protect themselves from mistreatment, such as not being put in a cell with adults. He assured the delegates that the UN is there to “accompany, but not be the driver or boss” in ID schemes.

The World Bank’s Vyjayanti Desai, program manager for ID4D, presented the various World Bank tools available to countries such as costing models, finishing with some possibilities of accelerating digital ID in Africa: 108 million Africans could open their first bank accounts; over $6 billion in social welfare could be better targeted; $38 billion in remittances could benefit from lower fees and 6.3 million refugees in Sub-Saharan African could have access to better protection and assistance.

“We want the forcibly displaced to be included in foundational ID platforms,” said UNHCR’s Chief of the Identity Management and Registration Section, Andrew Hopkins.

Agency representatives from the UNDP, UNHCR, World Bank, UNICEF, UNSD formed a panel, hosted by Omidyar Network Investment Partner, Magdi Amin, who urged a debate of differences in how the sector discusses and deals with identity. Rough conclusions by the panel were an agreement that ‘legal identity’ is clear, and while ‘digital identity’ is not, it is essentially the digital form of legal identity when a country has legally ratified its ID system. Foundational and functional ID systems were discussed, with a consensus that a basic, foundational system is still effective and that extra layers can be added to give it functionality later, and that the two key desired outcomes of ID programs, namely development and security, are mutually inherently linked and not necessarily compatible.

The first provider to speak was IDEMIA, whose Vice President of Sales and Africa ID set a fresh tone for providers, saying users of the new IDway product would be fully in control of their ID held by the system when organizations wanted to access their data and that standards are important for interoperability between systems.

De La Rue’s Anthony Golledge, head of business solutions, says Africa is encouraged to take back control of systems as society depends on secure documents, and EY’s Thampsy Koshy said that Africa is taking a “quantum leap” in ID.

PwC India’s Government and Public Sector Lead Rakesh Kaul wants delegates to see risk as the fundamental area to get to grips with in any ID project: “risk is the foundation, and governance and compliance are the two pillars which are helping us address the issue of managing our risk.”