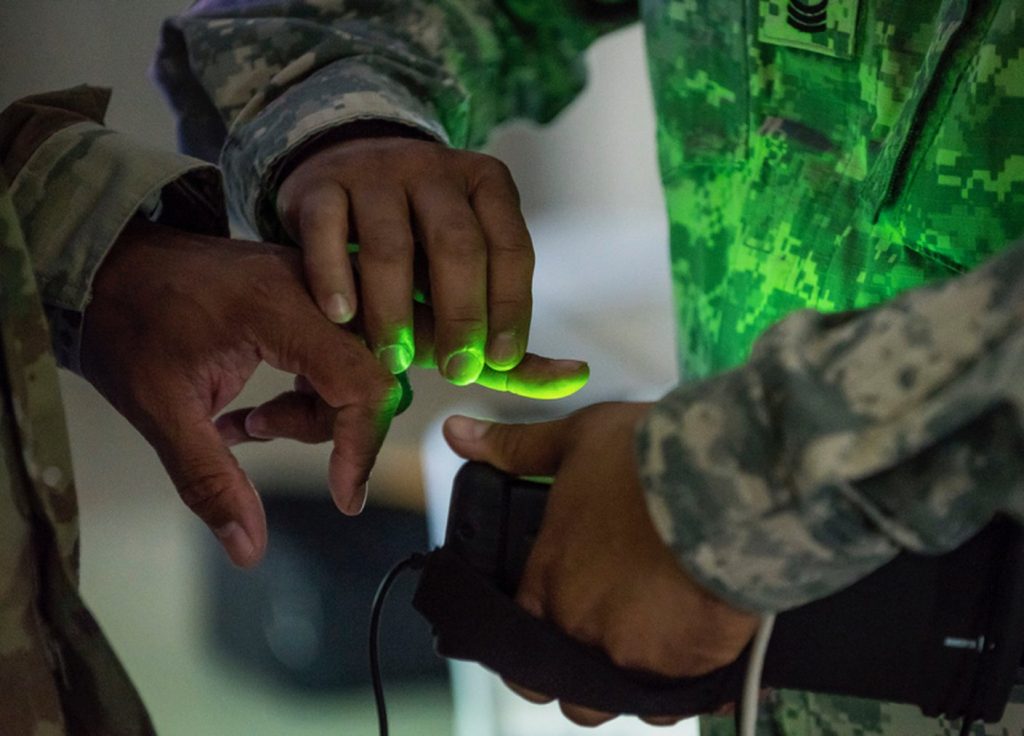 The U.S. Special Operations Command (USSOCOM) earlier this month issued a Request for Information (RFI) “to gain knowledge of potential qualified sources and to explore industry capabilities” for next generation multi-modal biometrics that include, but are not limited to, the collection and on-board storage of a person’s facial photograph, iris, fingerprints, and voice.

Existing Special Operations Forces (SOF) biometric technologies like those fielded for “sensitive site exploitation (SSE)” were used over the weekend by U.S. Delta Force to identify killed ISIS leader Abu Bakr Al Baghdadi – and, possibly, was used from a distance to identify and confirm his presence at the location. Delta used a combination of DNA, fingerprint, and other biometrics to confirm the terror group leader’s identity. But these and other biometric capabilities were also used to capture other biometric identifiers during intelligence exploitation of the ISIS compound, reaping an intelligence bonanza, according to counterterrorist authorities.

“SSE involves a series of methodical actions taken to ensure that materiel at the site is detected, collected, and processed,” and that this “materiel is used to answer information requirements and facilitate future operations,” a U.S. Army document on site exploitation says. “Presumptive analyses of materiel are conducted if trained soldiers and the appropriate equipment are available.”

The document explained that “automated assessment[s] of persons [is performed] on-site by using a biometrics collection device to collect biometric data, which is compared against known data. For example, using a hand-held collection device, a soldier collects biometric data from a person to compare against an approved biometric database,” like the theater-wide Biometrically-Enabled Watchlist [BEW] which likely was used at the ISIS compound on both dead and captured ISIS terrorists special operations forces encountered. “This automated assessment may or may not identify that person as a person of interest, which requires the collector or leadership to make a presumptive analysis to detain or release the subject.”

According to the U.S. Army document, latent prints, such as the palms and fingers — regardless of whether visible or invisible at the time — are collected during site exploitation, before or subsequent to document and multimedia translation and throughout other technical exploitation activities. Latent print examination then compares unknown biometric attributes to reference data maintained in “authoritative repositories,” or databases.

“The sophistication of latent print processing increases from its capture at an exploitation site through advanced technical exploitation,” the U.S. Army says, explaining that “unknown prints are compared to known prints by certified fingerprint and biometric experts or by automated databases,” and that “this process strips away an individual’s anonymity to support the targeting working group.”

As for DNA collected on-site “using specialized collection tools,” it is analyzed off-site at a forensic laboratory. The DNA profiles produced from analyzing collected samples is compared to previously produced DNA profiles to determine a person’s biological link to people, objects, and events.

Computers, compact discs, digital video discs, cell phones, and other electronic equipment or multimedia also have latent biometric data such as fingerprints or DNA “that positively identify users of electronic devices,” which are considered “high-value items based on their potential forensic value.” They also presumably contain time-sensitive information, thus the rapid extraction of data from them is essential.

Speaking about SOF SSE operations at the National Defense Industrial Association’s annual Special Operations Forces Industry Conference a year ago, Glen Cullen, program manager for SSE in the program executive office for SRSE, said, “We are getting so much information that we can’t go through it all … We need to have it triaged … We need to be able to identify what’s important from massive volumes of information.”

USSOCOM will follow up with manufacturers and vendors it finds of interest through the RFIs it receives to be asked to demonstrate their technologies at USSOCOM’s Tactical Biometric Event (TBE) 2020, which USSOCOM said it expects to be scheduled in April 2020 in or around Tampa, Florida, or another government-designated location that is yet to be determined.

USSOCOM said these “methodologies should include the potential for the transmission of the information in a Department of Defense Electronic Biometric Transaction (EBT) file format to an onboard or national database and receive a ‘match or no match’ response for use by the Special Operations Force Operator conducting the biometric collection activity.”

Any information manufacturers and vendors provide may be used by USSOCOM to develop future acquisition strategy, statement of work/statement of objectives, and performance specifications, but as with any RFI, for the most part, it does not mean USSOCOM intends to award a contract on the basis of this RFI.

However, given the nature of what USSOCOM is seeking, its current and future multi-modal biometric needs, and the military’s overall research and development in the field of biometrics – especially in the area of SRSE – it is highly likely that this RFI and the subsequent live testing, training, and demonstrations USSOCOM says it intends to conduct, will lead to an acquisition strategy.

The purpose of TBE-20 is to evaluate hardware and equipment submitted for the evaluation of next generation capabilities for multi-modal biometrics identification as described. The hardware and equipment shall be production models and capable of performing specific core missions sets conducted by SSE operators either on a tactical objective or at a forward operating base-like environment for biometric collection and identification of personnel.

For several years, the Pentagon has been working on numerous advancements in biometrics for SSE. They include:


In addition, USSOCOM has been seeking technologies for the collection, segregation and matching of voice from media or live capture; rapid DNA hand-held collection, processing, and matching; facial recognition up to one kilometer; and dustless fingerprint collection.

In January 2020, USSOCOM expects selected manufacturers and vendors for TBE-20 to train USSOCOM testers and Subject Matter Experts (SMEs) on the use of their device(s) to support technical evaluation of their device(s).

USSOCOM said “training will be limited to a maximum of eight hours per device and must include proper use of the device and troubleshooting. Vendors will be expected to train the USSOCOM evaluators and SMEs to the point where the evaluators and SMEs can determine expected levels of performance. Manufacturers and vendors will be offered the opportunity to conduct the same training for operators participating in the Operational Test and Evaluation (OT&E) portion of TBE-20.

Through February, USSOCOM evaluators will conduct a technical evaluation of manufacturers and vendors devices to ensure they perform to the standards and levels as presented, and may be asked to provide reach back support during technical evaluations.

In March, invitations will be made to select manufacturers and vendors to participate in the OT&E for TBE 20.

In April, USSOCOM evaluators and SMEs will conduct the OT&E with the participation of SOF operational personnel. Vendors will be asked to conduct training of their capabilities and devices during the first week, but will not participate in the actual operator driven events conducted jointly by USSOCOM and the TBD test agency. They may, however, be asked to address questions or issues by phone or e-mail during the evaluation.