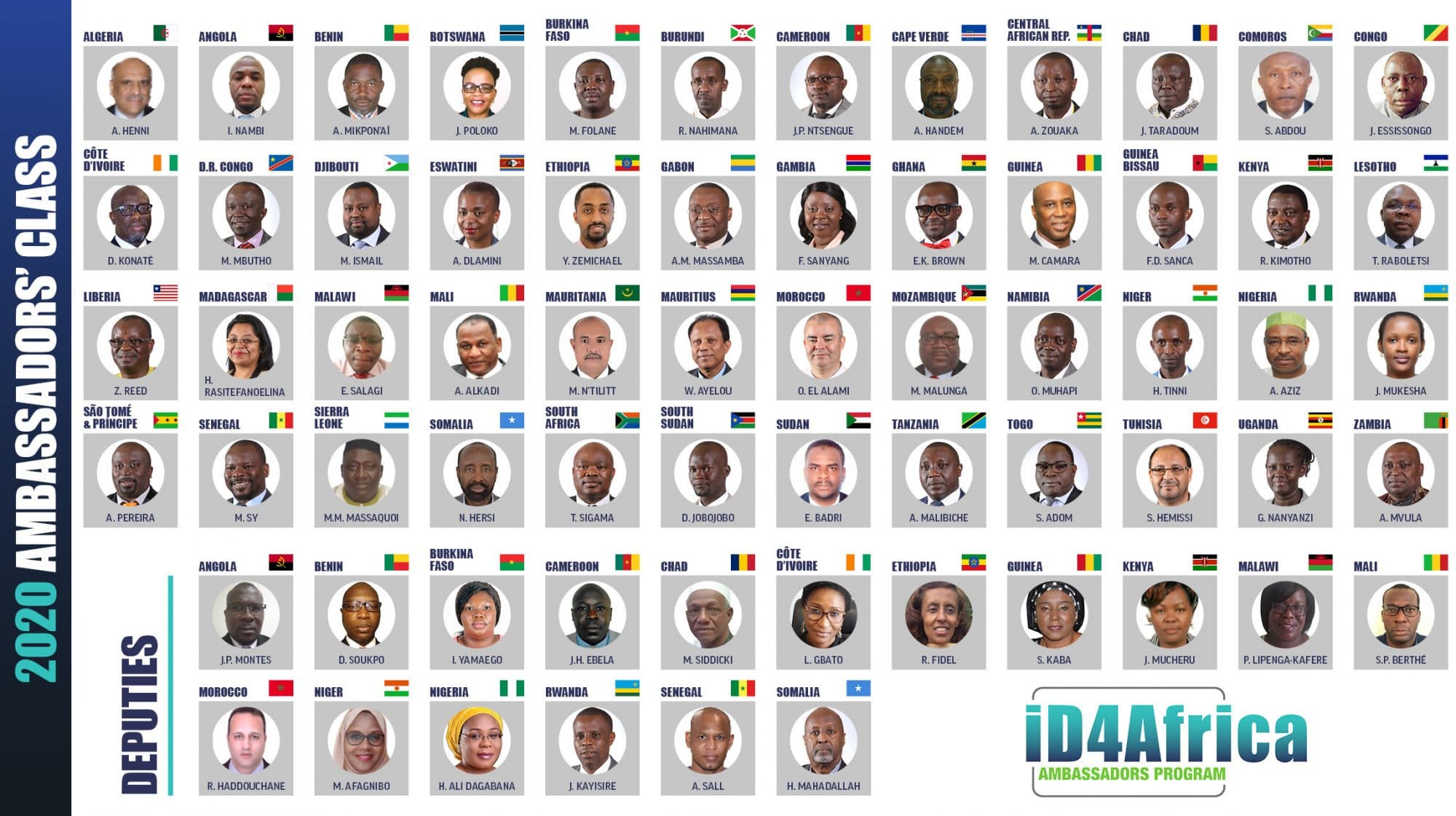 In addition to adding representatives for five new countries to the program, the new position of Deputy Ambassador was also created, along with Ambassador Emeritus, as serving Ambassadors from Nigeria, Ethiopia, and Côte d’Ivoire successfully reached the completion of their term limits. There are 17 deputies, added for countries with at least 10 million people, to support the Ambassadors to Africa’s most populous nations with high levels of activity around identity.

The 2020 Ambassadors’ Class, the program’s fifth, also features a greater number of senior government officials, up to the level of director generals and permanent secretaries.

Last year, the Ambassadors Program was extended across much of Northern Africa, growing from 29 in 2017 to 43 nations represented. In addition to the new countries this year, several Ambassadors moved on to private sector engagements, and became ineligible, so there are 15 new Ambassadors added among the 2020 class.

There was no additional turnover, however, as all Ambassadors remaining eligible chose to renew their roles. Likewise, even more applications were made for Deputy Ambassadors than the number of positions which could be created, providing a potential avenue for further expansion of the otherwise practically full program.

The half-dozen African countries still not represented are mostly going through state or governmental turmoil or transition that makes it impossible for them to engage with the identity community at this time, such as Libya, or so remote as to have little involvement in continental affairs, like the Seychelles, ID4Africa Executive Chairman Dr. Joseph Atick told Biometric Update in an interview.

“The thing that was remarkable this year for us is the intensity of the exchange with African governments that we experienced during the nomination and selection process,” Dr. Atick explains. “It matters; governments across the continent understand the importance of having an Ambassador, and that it matters who they end up selecting, so the process was the most engaged that we’ve ever had, with back-and-forth with the governments plus consultations with the identity stakeholders internally for them to come up with a candidate to represent their country.”

In a press release, Dr. Atick calls the 2020 class “the best class of Ambassadors ever.”

In addition to the role the Ambassadors have in influencing the Movement, they play a role in selecting delegates from their country, and take a seat on the ID4Africa Identity Council (IIC). Despite only launching last year, Dr. Atick notes in the announcement that it “has become a very important body for pan-African policy deliberations and knowledge exchange on identity matters. The IIC is already providing guidance and advice to African institutions and holds its own meetings presided by the elected President and Vice-President.”

“The Ambassador role is not a symbolic engagement, but something that is very active, especially after we launched the IIC,” Dr. Atick notes, emphasizing the leadership role the council has quickly taken on.

Ambassadors also reached out to their countries’ identity communities to update and further build the ID4Africa register of identity stakeholders, and manage the competition between government agencies for limited attendee space. These co-ordination efforts not only provide Ambassadors with higher visibility in their home countries, but also raise their international profile, as seen by OSIA’s Advisory Council, of which nearly every member is serving or has served as an Ambassador. The role of Ambassadors remains, however, first and foremost to serve their own countries.

Dr. Atick sees the success of the program is a reflection of Africa’s current needs. “They want to get to a point where identity becomes an infrastructure that they can count on for their economic and social development,” he says. “That is a clear national-level agenda. They all realize you have to create economic opportunities and start creating jobs and start fighting poverty if you are to become a player in the world theatre.”

Successes show the public that the work is being done to create opportunities, and in many cases identity programs are even campaign items, as government candidates seek to bring mobile money, bank accounts, direct payments, and other benefits to citizens.

The era of negative politicization, while it has dogged many projects in the past, is fading, as increasing awareness creates a popular expectation of identity provision.

“There’s still a lot to do because there are many misconceptions, but it’s amazing in five years how much evolution there has been in terms of expectations and in terms of where countries are, with countries having established clear lead positions in Africa,” Dr. Atick states.

Gender equity is another area ID4Africa continues to work on, though the number of women playing Ambassador or Deputy Ambassador roles has doubled to 14 for 2020. With the roles more hotly contested, and governments around the world, including across Africa, still composed more of men in senior positions, the situation increasingly reflects global glass-ceiling issues.

Likewise, coming challenges for the Ambassadors and IIC may be shifting towards political, policy, technology best-practice and budgetary concerns. The tall task of bringing pan-African leadership to the table is effectively now complete.

ID4Africa 2020, the 6th Annual Meeting of the Movement, will be held in Marrakesh, Morocco, June 2 to 4, with Biometric Update reporting live from on-site as Official Journalist.