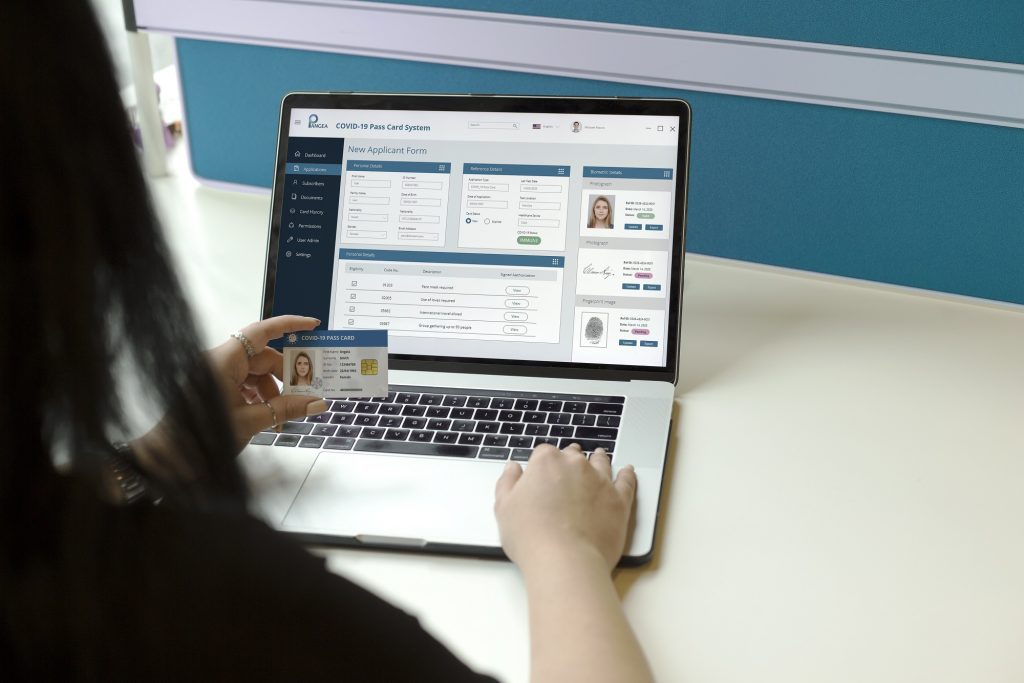 Pangea has launched an end-to-end platform for issuing biometric smartcard-based COVID-19 immunity or travel credentials in an effort to support the global airline and tourism industries.

The company says global health experts agree that a solution to expedite the flow of passengers is necessary to enable a recovery in the air travel industry. Pangea proposes a card with a photo of the person, a digital signature, a chip and a hologram. The card can be securely linked to the records of a country’s medical authority, and include encrypted data on the holder’s profile to verify the individual has tested negative or has immunity to the virus.

The health ministry of each country would oversee the issuance process, in cooperation with local health providers and hospitals, and the system would also require collaboration by tourism ministries, airports, airlines, and insurance companies, according to the announcement. Pangea says the solution is flexible enough to support the protocols of different countries.

Pangea provides a sophisticated search engine which is used to review each case to determine entry qualification, and a dynamic engine allows the system to make real-time updates as countries revise their requirements.

“The need to open up the economy is critical and existential, but it requires that each and every country adopt advanced solutions for reducing the danger of mass infection,” Pangea EVP and Government Division General Manager Uzy Rozenthal. “For example, the 14-day isolation after a flight is not practical, both in the case of mass tourism involving tens of millions of people and in the case of businesspeople whose time is expensive. The immunity ‘passport’ we developed would enable the creation of sterile areas where there is no danger of infection and where thousands of people would feel safe to conduct any activity without fear.”

Pangea says it is in talks with several governments regarding the use of the biometric card.

The company plans to expand the smart card system’s capabilities to make it a full scale medical ‘passport.’

IDnow likewise says it is in talks with the UK government to create “immunity passports” for people who have recovered from COVID-19.

According to the company, the talks revolve around the use of video identity verification software to confirm that the person registering is the one pictured on the offered identity document, and to enable a short interview to be conducted with the individual.

Since launching in the UK last year, IDnow says its AutoIdent has been in enormous demand from companies seeking to check the security features of ID documents with the artificial intelligence-based software.

Major UK companies adopting IDnow’s technology include BP, Macropay, Holvi, Allied Irish Banks (AIB) and GVC, according to the announcement. Demand in regulated sectors like finance and gaming has been particularly strong.

“Thanks to the reliability of our German technology and given it has to adhere to the BaFin regulations, the highest standards in the industry, we are attracting leading players in the UK’s gaming and financial services sectors looking for compliant and steadfast identity verification services,” comments IDnow Head of Sales for UK and Ireland Roger Tyrzyk.

Tyrzyk said recently that staff at the company’s new UK office in Manchester could increase to double digits within two or three years.

The prospect of widely-used digital health credentials lends new urgency to the need for a trusted guardian that can store identity information while allowing individuals control over its use, akin to the role of Visa and Mastercard in the payments ecosystem, Nomidio CEO Andersen Cheng argues in an editorial for CPO Magazine.

While regulation is necessary to make sure fees remain reasonable and balance the powerful position this puts the payment networks in, Cheng suggests the same degree of privacy and data security enjoyed by people with their payment cards can be applied to identity with emerging technologies.

The tide is turning against surveillance capitalism with new regulations like GDPR and CCPA, and businesses will need to change their approach to data to avoid people’s immunity status from proliferating around the web like so many other breached personal details. Cloud-enabled trusted guardians can provide the necessary information sought by organizations people interact with, without sharing personal information for those organizations to store. Threshold cryptography allows decryption keys to be split between multiple parties so that no one entity, including the guardian, can decrypt personal data. Finally, the tracking of individuals through identity credentials can be halted by anonymizing and encrypting user behavior and allowing the user to administer a threshold cryptography key system.

Cheng argues that while the centralized identity guardian would have substantial power, it would be more easily regulated, and could even be transitioned to a global public utility with oversight and regulated fees.

“I am deeply concerned that the initial proposals for immunity passports are at best racing to be functional and forgetting the need for privacy. At worst, some players involved realise that being in control of peoples’ immunity status is an extremely powerful position and are seeking to exploit it – governments are seemingly unaware, or perhaps so desperate they’re looking the other way for now. That’s why we need a cloud-based trusted guardian, one that has significant checks and balances hardwired into its design from the outset and one that puts our privacy first,” Cheng concludes.