Edgeworx, Nvidia, BriefCam pitch value of edge biometrics and analytics during a pandemic

The COVID pandemic has resulted in a huge emphasis on implementing video surveillance, biometric facial recognition and other applications for health and safety, and vendors are leveraging edge computing and powerful processing technology in edge devices to meet the demand.

Edgeworx is the latest example of such companies. Edgeworx, a provider of edge-native open source software, is best known for its work supporting the Eclipse Foundation’s ioFog project. Now, the company has released an integrated AI-enabled camera aimed at enabling schools and other business to cost-effectively re-open their services.

“Safety checks will become a feature of daily life as we return to our schools and workplaces. But many of these checks will be ineffective because organizations can’t afford high-end solutions that cost tens of thousands of dollars so they rely on devices that have been hastily thrown together and are inaccurate. That has to change,” said Farah Papaioannou, president and co-founder of Edgeworx.

Edgeworx’ Darcy is a camera that incorporates the company’s AI software and open architecture to work with low-cost smart room sensors. The result is a system that the company says can accurately record body temperatures more quickly than expensive, dedicated precision thermal cameras. An added benefit: in high traffic areas such as schools, the speed of detection means people are not spending as much time waiting in line.

The company says that the system is accurate with within 0.5 degrees Centigrade yet requires far less work in maintaining its accuracy. Also, like other edge-ready smart cameras, the system can be used to detect whether people are wearing items such as sunglasses that interfere with a proper reading (The same software can help with rule enforcement by detecting if customers or children are wearing face masks).

Edgeworx explained that most thermal cameras require an expensive scientific instrument to calibrate the reading from the camera. The Darcy system calibrates its readings against inexpensive smart sensors that attach to objects around the room. The sensors read the temperature of those objects and report it continuously and wirelessly to the camera. This method is said to be less prone to failure and allows users to move the camera without requiring recalibration.

The company also notes that Darcy takes readings in under 100 milliseconds and uses data processing to identify any anomalies between the 10 to 40 readings it has taken while the person approaches the camera. The software records the most reliable reading; traditional cameras take only one reading, which the company says can increase the chances that a person with fever is not detected. 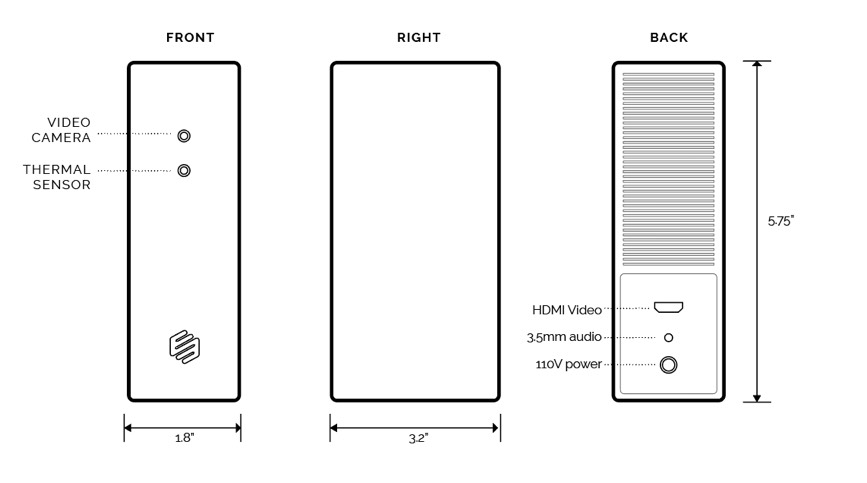 (The Darcy camera is used to check for fever detection, masks and symptoms. Source: Edgeworx)

Nvidia is another company that has featured heavily in many efforts to bring powerful AI capabilities to edge devices. The company has been targeting efforts to bring new applications to market for its GPU chips with developer outreach and startup accelerator programs.

Nvidia’s Global Healthcare AI Startups Lead, Renee Yao, outlined some recent projects and design wins in a LinkedIn post. She explained how Nvidia and its partners are helping to enable the creation of “Smart Hospitals,” where smart sensors such as AI-enabled cameras are being used to help facilities run efficiently and safely. AnyVision is a partner using Nvidia DGX Systems (DGX-1, DGX-2, and DGX Station) for visual intelligence systems that are being deployed in 10 hospitals in Israel. Using the Clara Guardian application framework, hospitals are checking people’s temperatures with systems that are integrated with AnyVision’s access control systems. AnyVision’s systems use biometric liveness detection in both standalone systems or on mobile devices to prevent identity spoofing.

For another example of how cameras are becoming more powerful and programmable, a company called BriefCam announced that its edge analytics technology is running on Axis Communications cameras with built-in deep learning processing units.