PayByFace has spent the past year significantly ramping up its biometric payments for in-store purchases, raising the profile of its facial recognition-based POS systems in Romania and elsewhere in Europe.

Biometric Update interviewed PayByFace’s CEO Mihai Draghici to enquire about the firm’s technology and future plans, and before delving into PayByFace’s history, Draghici spoke about his own.

“Academically, I’m a university dropout,” he says. “I left during my sophomore year to start a career in IT instead. I never finished my Electrical Engineering degree path. I was about 20 years old and never looked back.”

It was then that Draghici decided to learn from industry leaders instead of university professors.

“I worked for a former SVP of Visa and SVP of federal gold reserve and many other distinguished leaders who taught me the ‘real world’ engineering lessons by throwing me directly into the most difficult problems in enterprise engineering teams over the past 20 years,” Draghici explains.

“I’ve been building startups worldwide ever since then.”

In fact, Draghici has founded over 25 companies throughout his career, ranging from sole proprietorship in smaller local markets to several limited liability partnerships and corporations, before his latest foray into biometrics.

When asked how the facial recognition app works from a technical perspective, Draghici says the technology is his own ‘Coca-Cola formula.’

“I can’t really tell you the inner technical workings since it’s our biggest secret. It took me three years to build it so I’m not giving it away that easy!” he says with a laugh.

However, Draghici explains, “in today’s world, it’s all about the customer journey, not really the tech inside the box. Because if people can’t use it easily and securely (as far as payments are concerned), it doesn’t really matter how awesome it is on the inside.”

PayByFace’s CEO designed the app so that if users want to buy a cup of coffee they do not need to use a technology that is unique and matched biometrically against a database of the entire world.

“That would be stupid from an engineering perspective,” Draghici explains.

Instead, users only need to be unique within their ‘neighborhood’ of PayByFace users, located within 20km of the shop they are buying from.

Discussing the accuracy of the app’s facial recognition algorithms, Draghici places it at around 99 percent in under one second.

“You don’t even need an internet connection during the matching process. All the magic happens locally on our device, in real-time.”

“We are GDPR and PSD/2 compliant and have been fully validated by the National Bank of Romania and the European Central Bank — plus several other large banks in Europe and the Middle East.”

The documents are available on both PayByFace’s website and within the app, and users and merchants alike must understand and accept their terms to use the platform.

“We follow standard security practices and compliance procedures to protect our data,” Draghici said, “and we do not store photos or payment information in our system.”

In order to do so, PayByFace leverages existing certified ecommerce gateway integration and card tokenization, then converts the images into encrypted biometric data that is unrecognizable by a human.

“We basically ‘tokenize’ your face as well just like the card info.”

“That was me driving back from Amsterdam to Bucharest for the holidays,” the CEO explains.

“We designed our PayByFace storage trailer with custom wrap designs so that people could get a glimpse of our logo as I drove across Europe for four days,” Draghici says, describing the vehicle. 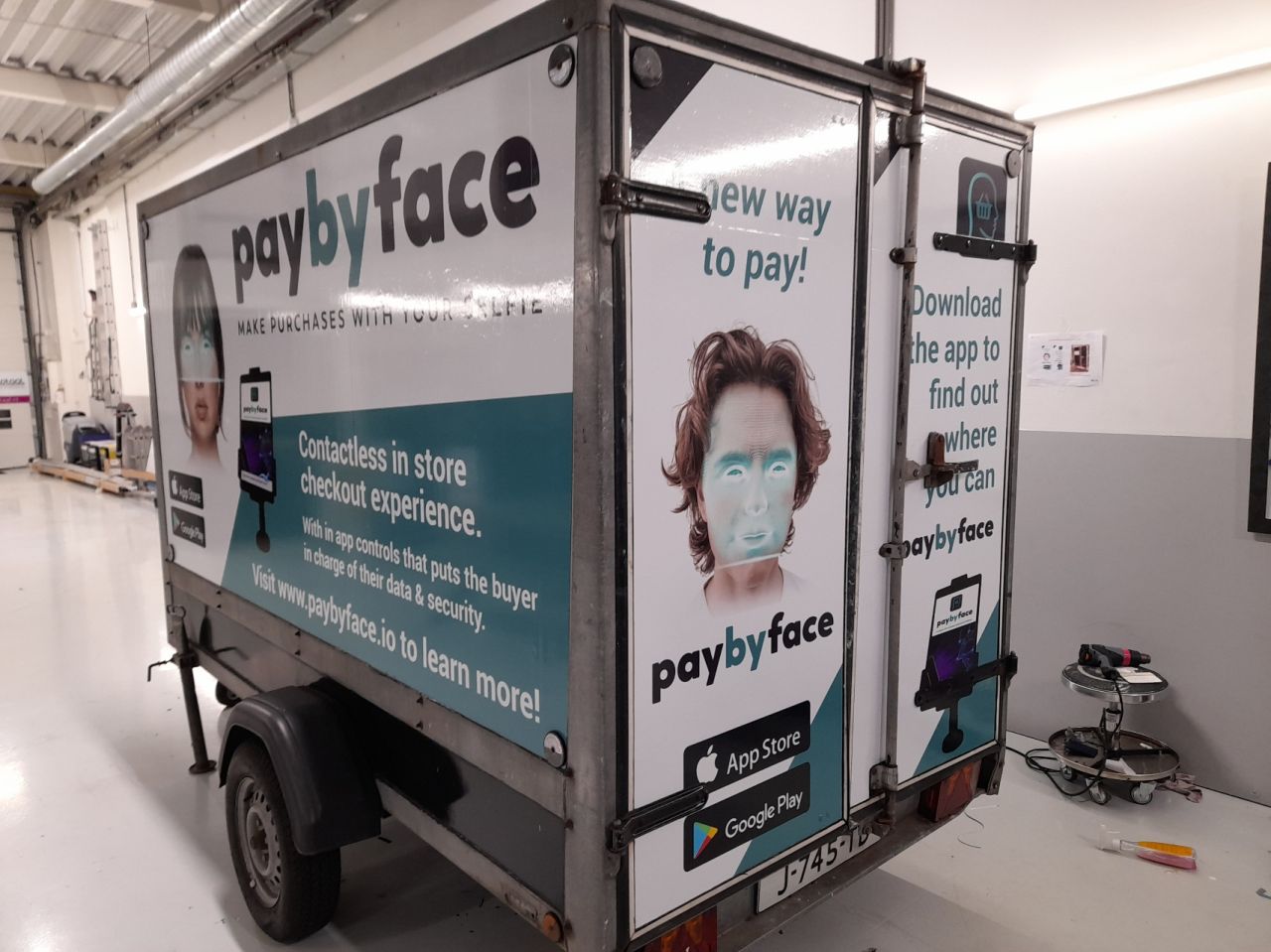 “I’m happy to say we made it home safely and we are going to stay put for the holidays since Covid lockdowns are in effect and we don’t want to risk anything at this time.”

Draghici adds that, perhaps next year, the company could hit the road again and get people to see the trailer more in order to spread brand awareness further.

Discussing the impact of PayByFace in Europe, the CEO describes the company’s platform as the “only face recognition based payment system in SEE right now.”

PayByFace currently counts 14 live locations and over 65 total signed locations in Bucharest, the latest of which are going to be deployed and installed in the city soon.

“We have several partners here helping us go to market, in addition to the VISA Innovation Program in Bulgaria and Startupbootcamp in Amsterdam,” Draghici says.

As these projects and more come on line, PayByFace is positioning itself to be an early leader in a biometric market with unknown, but definitely large international potential.