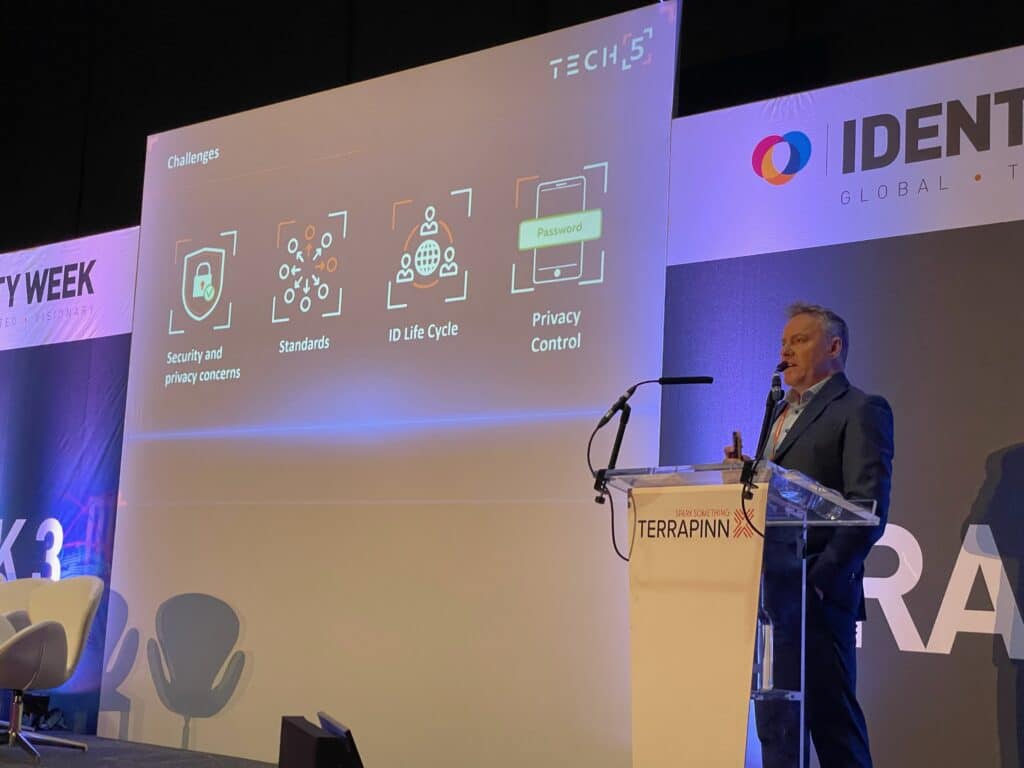 The Identity Week 2021 conference in London is bringing together digital identity and biometrics technology vendors and buyers, government officials and academics – and even a Biometric Update reporter.

Presenters on the first day included representatives of Innovatrics and Tech5. Themes covered the role of digital identity in healthcare, restarting travel during and beyond the COVID pandemic and digital identity within government, which we have covered separately.

Digital identity in health – why sharing medical records could be good

“Imagine if you only had two weeks to live – how much do you care about your privacy? You want to get help,” said Hans Constadt, a digital health consultant. “You want to open your data, I’ve seen people tweeting their stories, screaming for help and in fact we’ve found people sharing their data and we’ve been able to find them the right clinical trials because we were able to help them.”

Constadt believes in giving people the control to decide how much medical data to share, with whom and when. Digital informed medical consent could ultimately allow the whole world to become a clinical trial.

Notes from a biometric election

Vladimir Kostiviar, senior technical consultant at Innovatrics, talked about the company’s experiences in biometric elections in sub-Saharan Africa. The addition of minor detection facial analysis to detect where children were being put forward fraudulently as voters proved highly successful. The company trains its algorithms on datasets of photos of local populations around elections – both adults and minors.

Kostiviar also noted how facial recognition based on a biometric electoral roll was rarely used on polling day, and that Innovatrics has found that voter cards issued during an election period are often highly trusted locally and become de facto ID systems.

The role of paper in a disparate identity landscape

Paper and plastics suppliers are attending in force. Even the most ardent supporters of digital identity such as Tech5 acknowledged that for many, relying on some sort of smart device would not be feasible. Harriet Plumb, sales director at Portals Paper said that “digital is part of the solution and not the whole solution.” Acknowledging that this is what one would expect from a paper supplier, she explained how there needs to be “closer proximity between competitors and manufacturers.”

Plumb said that passport issuers are often far removed from the civil registry and that contracts for different credentials are awarded to different companies, which then engage multiple suppliers. Contracts for the digital versions are again awarded to different companies, increasing the distance between identity providers and the civil registry. ICAO digital seal standards could help bring together disparate elements of identity.

Estonia versus the future: the role of government in identity ecosystems

“As long as we believe that identity management centers around these central databases from which identities can be repurposed and put on traditional credentials – or new credentials – there is not much future,” said Machiel Van der Harst, CEO of Tech5.

“What we believe in is an ecosystem where identity management is decentralized and where the individual will have full control over their own identity,” said Van der Harst. But his co-panelist was Margus Arm, deputy director general of the Estonian Information System Authority who countered that there is a place for a centralized system as otherwise there are black boxes and “it’s hard to trust a black box.”

Arm said public private partnerships in Estonia have helped the private sector, such as banks being able to use people’s state identity for logging into accounts rather than needing to establish their own system of secure keys. The government-backed approach is also providing tools for new entrants to the market to use in situations which would otherwise be prohibitively expensive. Plus, the fact that 75 percent of people are using digital ID in Estonia for everyday business means a ready market.

“You can do everything from home,” says Arm, adding that they do not know how many services are available through digital ID. “The only things you cannot do online is get married and get divorced. It’s not a question about technology – I think it’s good to see your husband or wife at least once before you get married.”

“We started in 2002 . . . and the usage of ID cards increased so slowly and it took about ten years to reach the point where 50 or 60 percent of the population was using digital identity,” Arm said, as a warning to entities starting out on the journey to digital identity. Patience is required.

“It’s a long journey, but if you never start, you’ll never reach the destination.”