Touchless biometric technologies were in demand long before the pandemic, and touchless fingerprint scanning has been increasingly accepted as effective, as reflected in guidance from the U.S. National Institute of Standards and Technology this year. Fingerprint biometrics are also being adopted in an ever-greater variety of systems and applications, including both physical and logical access control, but limited only by the imagination of developers.

The convergence of these two trends motivated the new Hamster Air touchless fingerprint scanner from SecuGen, and the company’s VP of Sales Jeff Brown tells Biometric Update that despite the growth of touchless fingerprinting, the device fills a major area that has been previously unaddressed.

Mr. Brown notes that SecuGen was seeing significant interest in touchless fingerprints even before the pandemic, particularly from certain parts of the world, so the company had already considered how best to address the concerns that have now become universal.

“We were fielding enough requests for a safe, clean reader that we contemplated having an anti-microbial coating at one point in time. Interest in touchless however is much, much greater now than it was before,” he acknowledges. “I have asked dozens of partners about their interest in such a product and so far, I haven’t heard anyone say they aren’t interested.”

Attitudes have shifted in many areas due to the pandemic. While some employees will return to offices as it subsides, Mr. Brown notes that there will still be much more office work done from home than there was in the past. “The same is true of touchless biometrics,” he says. “The move towards touchless technologies will not entirely reverse. It is here to stay.”

This disruptive trend also coincides with several others, like increasing cybersecurity threats.  There is the corresponding adoption of multi-factor authentication and increased urgency to eliminate passwords.

While touchless fingerprint biometrics have advanced dramatically over the past few years, Mr. Brown says the market has so far been dominated by four-finger scanners, with no single finger readers available.

This is despite single-finger applications continuing to be the most common type by far, and single-finger scanners from FAP10 to FAP30 continue to outsell other traditional fingerprint biometric scanners. These are the scanners most likely to be used in workplace authentication scenarios, enrollment stations, and other high-traffic, multi-user environments.

To meet this need, the company developed the Hamster Air, which Mr. Brown says is a compact, reliable and affordable touchless fingerprint biometric scanner, unlike anything else he’s aware of on the market.

“The feedback that we have been receiving is that partners want to offer their customers a touchless alternative to a standard ‘touch’ fingerprint reader,” the VP explains. “The applications for a contactless fingerprint reader like the Hamster Air are pretty much the same as for older, touch readers.”

That means not only a wide range of existing applications, but a growing range as well, as developers build biometrics into more systems to enhance security, add personalization or ease user experiences.

The overall market for fingerprint sensors is still forecast to grow by over 10 percent per year, and the contactless biometrics market is forecast for dramatic growth over the next several years, reaching $18.6 billion in five years or $27.6 billion in six, according to a pair of recent market reports.

There can be challenges integrating touchless fingerprint technology with legacy systems, and Mr. Brown notes that SecuGen recommends re-enrolling with the device to maximize accuracy.

“If you enroll with and authenticate with the Hamster Air, it is remarkably accurate.”

While the NIST Fingerprint Image Quality (NFIQ) 2.0 algorithm was designed for use with legacy touch-fingerprint systems, research indicates that it can be effective in assessing the quality of contactless prints.

The performance of the Hamster Air in terms of speed and FRR is comparable to the company’s touch fingerprint biometric scanners, according to Mr. Brown.

Making the transition to touchless fingerprint biometrics has also become easier than ever before, as the technology and understanding of it both continue to evolve.

“Integrating the Hamster Air is not much different than integrating any of our other fingerprint readers,” he says. “The SDK provides APIs for image capture, template extraction and template matching. A software developer can easily integrate the use of the Hamster Air into their software.”

With a growing body of research and technical guidance, and standards in development, touchless fingerprint biometrics are positioned for further adoption. Early adopters are reporting success and expanding deployments, leading to further increase in demand for fingerprint readers like the Hamster Air. 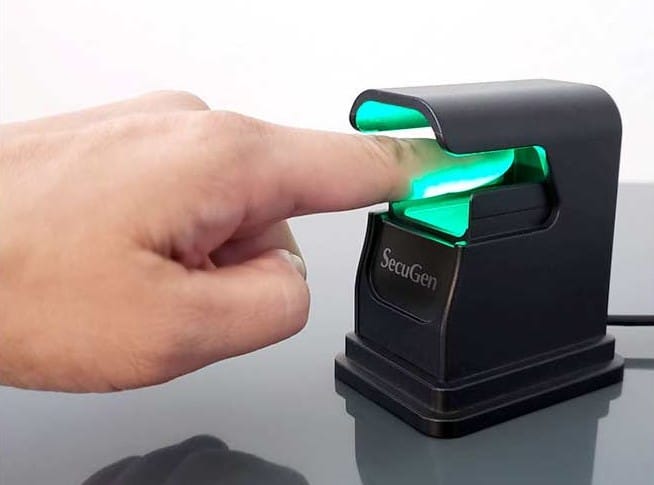