Toronto-based startup has its finger on the pulse of identification

Tucked away on the second floor of an old University of Toronto building is a small group of innovators with their hearts set on evolving the consumer biometrics and identity spaces.

Headed by UofT graduates, Karl Martin and Foteini Agrafioti, Bionym is a small Canadian startup that has developed a unique method of biometric identification, using the unique pattern of a users’ electrocardiogram (ECG), which varies based on heart size, shape and position in the body.

Bionym’s premise is based on co-founder Agrafioti’s research from her PhD and Martin is the company’s CEO.

The startup’s office is modest — with an old industrial feel and bright orange walls, a small heart-shaped stuffed animal sits on the couch in the middle of the office. On a desk nearby, there is a crude handheld sensor and pulsing ECG patterns on a large monitor facing the centre of the office. An engineer sits at a desk, clicking away on a computer, with soldering irons, alligator clips and other loose ends spread out on a workspace nearby. 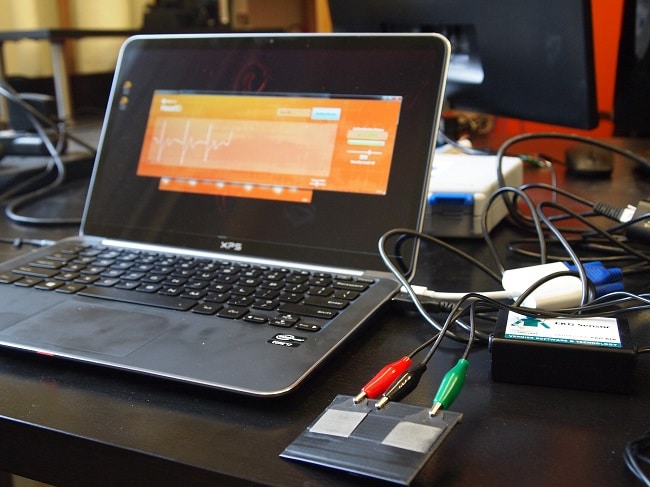 “We don’t see ourselves in the same industry as most people would consider biometric companies,” CEO Karl Martin said. “On the more traditional security access control, enterprise border control side, you’ve got a lot of big players and medium-sized players on the more consumer side, so it’s fragmented. We find ourselves somewhat alone – it doesn’t really matter if we’re American or Canadian because we’re starting to chart into territory where we don’t see competitors in the biometric space. Our competitors are status-quo, rather than putting new technologies out there.”

Specifically, Bionym is built upon the company’s software and core algorithm for identification – called HeartID — and as of yet, there aren’t any others doing the same thing.

“It’s consumer biometrics and identity, and that space practically doesn’t exist yet and so we want to be a part of actually figuring out what that is and I think that’s where we are. We’re not competing with fingerprint for border control. The closest kind of competitor you might see is facial recognition for consumer.”

Though the modality is unique, the premise of identification is similar. First, a user’s ECG is recorded to produce a template, and then it is that template used to identify users by heartbeat. I had a chance to test out the product myself, and identification occurs quickly. In addition, say the founders, it’s a tough system to spoof as there is a significant amount of liveness detection built in, seeing as an ECG entails a beating heart.

“We have a lot of science behind this, and we would never say that anything is 100 percent bulletproof, but security is all about the effort,” Martin said. “First you’d have to record someone’s ECG and be able to spoof it, so you’d have to skim the ECG like you’d skim a fingerprint off a surface, so you’d have to have some sort of interface where you’re holding something and someone is unaware that you are recording their ECG. So that bar is already pretty high compared to just touching random surfaces, and you can do that [with fingerprints] passively. With ECG, you need an active recorder right there when the person is to pick that up. To actually spoof it, you need a device that will recreate that signal and then apply it to a sensor to where you want to then hack.”

“The bar is very high compared to fingerprints,” Martin said.

“For us, we want to be focused on [the consumer] range of applications from the beginning rather than taking another kind of technology and mashing it into the consumer space.

We’ve gotten the software to a point where it basically — we call it a beta version — works for handheld applications. There’s issues that must be addressed as to what integration is best […] but our business will likely focus more on the integrated product and getting out there as an integrated end-user product. That can be a combined strategy of both our own product, as well as integration we do with manufacturers.”

In terms of next steps, the startup remains fairly tight-lipped as to what it’s got planned, though they continue to look at various integrations with hardware manufacturers and hint toward an end-user product.

“We’re in the midst of a switch here, where we’d actually be making a single device ourselves, so we’d be transitioning to hardware development,” Martin said. “We’re likely going to be growing the team because a software team can be quite small. Going into end-user hardware products, we need to grow.”

“We get calls every week from big names and no-names, and there is a lot of interest in our API. The challenge for us is to decide. We have limited resources we need to put in our own resources to make an application work. So deciding which market to focus on, what type of product and application to focus on, the goal in the end is to have a very broad technology but in terms of initial commercialization we need to focus and that’s what we’re positioning right now. We’ve got a lot of relationships on the go right now, but it is likely only a few of them we will fully execute to an end-user product.”

In terms of getting Bionym off the ground, the group says it’s been largely funded by grants as of yet, though will soon turn to the venture community.

“We were actually going to be potentially raising money very soon, but we’ve decided to hold that off a bit until we develop our product a bit more because we are changing our focus a bit. We have to raise money to put an end-user product out there later this year,” Martin said, adding that the company hopes to attract capital from private investors, VCs and angels.