The research consultancy expects that worldwide mobile payment transactions will reach $250 billion in 2014, reaching $750 billion in annual transactions with more than 700 million users by 2020.  Biometrics will speed mobile commerce, especially in North America, because the technology can offer a higher level of security, while providing an intuitive customer experience. 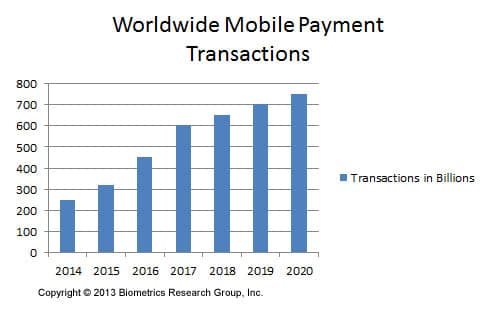 Biometrics Research Group estimates that at least three-quarters of current smartphone users do not secure their devices with a passcode.  The use of instinctive technology such as fingerprint recognition will allow consumers to easily secure their devices and make payments.  The integrity of a payment process without a physical payment card is quickly compromised if a device is not secured.  The goal of smartphone biometrics is to therefore secure the user login process in order to enable more dependable user identification.

Biometrics Research Group expects that over 90 million smartphones with biometric technology will be shipped in 2014.  The consultancy predicts that Apple will initially lead in the deployment of such devices, due to fact that the firm is the first consumer electronics provider to introduce biometric technology to the global smartphone mass market. 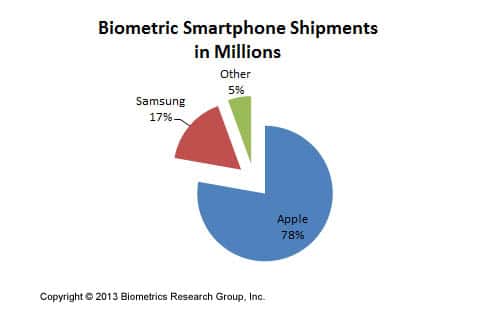 Earlier this week, Apple announced that its new upmarket iPhone 5S will have a fingerprint identity sensor, entitled Touch ID, built directly into the device’s home button.  As reported by BiometricUpdate.com, the new generation premium Apple smartphone will feature a capacitive sensor that is 170 microns thin, feature 500 ppi resolution that can scan sub-epidermal layers and have a 360 degree readability capacity.  The sensor will be able to unlock the phone and facilitate purchases in the iTunes store.

Using an adaptive system, which Apple obtained through the purchase of AuthenTec Inc. last year, the iPhone sensor actually become more proficient at reading fingerprints the more it is used.  AuthenTec specialized in offering content and data protection, access control and strong fingerprint security on mobile devices.  By acquiring the firm, Apple obtained most of the foundational technology patents for fingerprint biometrics, along with a broad patent portfolio consisting of 200 issued and filed patents in the United States.

The acquired technology utilizes an embedded sapphire crystal sensor, and also encrypts fingerprint data directly into the iPhone’s new A7 64-bit processing chip, so that biometric information will not be stored in the cloud.

Due to large number of new smartphone that will ship in 2014, Biometric Research Group expects that the smartphone mass market will drive rapid growth in consumer electronics biometrics.  Earlier this year, the consultancy previously predicted that widespread use of biometrics in consumer electronics would fuel total industry revenue growth.  Currently, Biometric Research Group predicts that biometric smartphones will increase the compound annual growth rate for consumer electronic biometrics by at least 35 percent over next five years. A major contributing factor in this growth will be increasing demand for personal devices that can conduct safe financial transactions.

In March, the Biometrics Research Group accurately predicted that biometrics would become integrated within a wide number of mobile devices within this upcoming smartphone product release cycle.  The consultancy also predicted that integration would be driven by smartphone and tablet manufacturers such as Apple and Samsung Electronics.