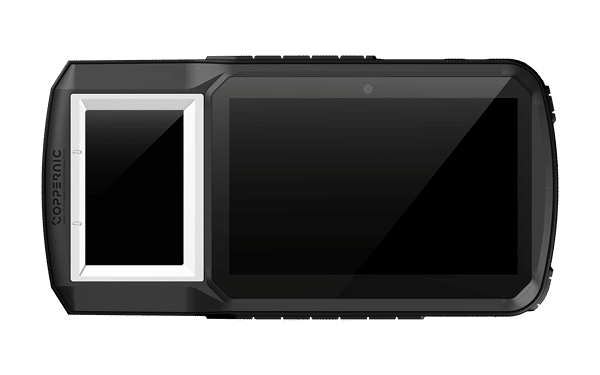 Coppernic has launched a new multifunction biometric tablet incorporating Integrated Biometrics’ Five-O fingerprint sensor into an Android tablet along with a camera and a biometric iris reader.

The ID Platform FAP50 is a powerful mobile device well-suited to delivering legal identity to those without it in support of UN Sustainable Development Goal 16.9, according to the announcement from IB.

The Five-O, which IB says is the world’s smallest FBI-certified 4-slap fingerprint sensor and the world’s first FAP 50 scanner, delivers flawless function in all environmental conditions, with very low power requirements. The Five-O is also rugged, and weighs less than 200 grams, and between these characteristics was the only FBI and AFIS-compliant scanner on the market that could meet Coppernic’s stringent requirements.

“The Coppernic ID Platform FAP 50 is rugged, weighs less than a kilo, and has the latest and most efficient biometric capture technology onboard,” said David Gerulski, Executive Vice President of Integrated Biometrics. “It will continue the revolution we’ve been talking about – mobilizing large-scale enrolments and census activities that were previously tied to slow, fixed facilities. It’s a wonderful achievement.”

The Light Emitting Sensor (LES) technology utilized by the Five-O has contributed to the success of other biometric hardware products, such as SIC Biometrics’ IdentiFi series.

“Coppernic is very proud to provide such a timely device for pushing forward the United Nation’s Strategic Development goals for 1.5 billion people – half of them living in Africa – are legally ‘invisible,’” said Jacky Lecuivre, president of Coppernic. “The Five-O sensor from Integrated Biometrics has been a welcome addition, helping us achieve our goals for the device.”