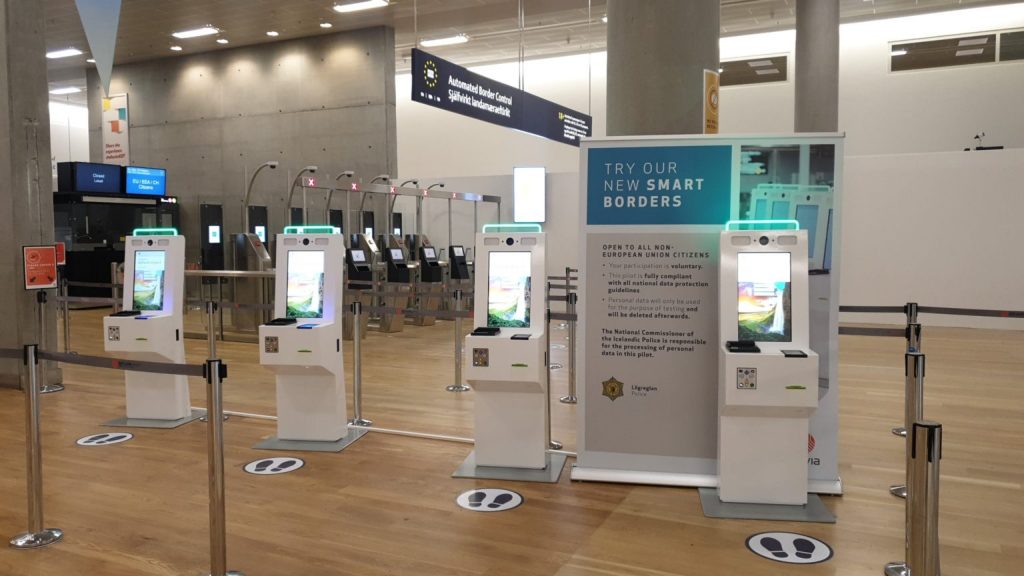 A pilot of BorderXpress biometric kiosks from Innovative Travel Solutions (ITS) at Keflavik International Airport in Iceland has been successfully completed, with more than 9,500 passengers processed according to requirements of the Entry/Exit System (EES) coming to the Schengen Area.

The six-month trial of kiosks began in June 2019, implemented the security and data collection requirements of the incoming EU rules. Processing was sped up by enabling families and couples, who made up 20 percent of travelers, to use a single kiosk. The pilot was a joint project between ITS, Iceland airport operator Isavia, and Icelandic Police.

Isavia says Third Country Nationals entering the Schengen Area for the first time took only 64 seconds on average to process, while travelers who had previously traveled in the region took only 42 seconds, not including additional and optional declaration parts of the workflow or questions from individual border authorities. The border authority’s technical requirements are now better understood, according to the announcement.

“The pilot program was an excellent opportunity to introduce automated, self-service border control technology, trial a range of workflows and gather key information to prepare us for the impending regulations,” says Gudmundur Dadi Runarsson, Technical and Infrastructure Director at Keflavik Airport. “We’re able to use these insights to modernize our border control system, while also improving the overall passenger experience and safety of our airport.”

ITS designed its solution for Keflavik in 12 weeks through consultation with the program’s other stakeholders, customizing the four BorderXpress kiosks used to be effective for all parties.

The announcement also notes that a white paper recently prepared for ITS by InterVISTAS concludes that kiosks provide a much higher output of passengers than eGates, resulting in cost and space savings and better support for border authorities.

Clear takes off at Lambert

Clear biometrics have been launched to St. Louis Lambert International Airport Terminal 2 where Southwest Airlines operates, the St. Louis Post-Dispatch reports, and are expected to be expanded to Terminal 1 within the next few weeks.

“CLEAR has been one of the top requested services from our passengers and customers,” Lambert director Rhonda Hamm-Niebruegge said in a statement. “It will also improve the experience for all our visiting passengers who are already CLEAR members.”

Hamm-Niebruegge says that the service is mostly used by business travelers.

The contract for the service pays Lambert $66,000 a year, plus 10 percent of the fees it receives from residents of the metro area and 40 counties in Missouri and Illinois.

Self-service baggage checking has been launched at Los Angeles International Airport (LAX) with kiosks that can authenticate travelers with facial recognition, though the pilot program that does not utilize biometrics, according to CBS Los Angeles.

Biometrics could be added to the system eventually, an airport representative says.

Passengers flying from Tom Bradley International Terminal on Asiana, Cathay Pacific, Lufthansa, Norwegian and Scandinavian airlines. It will eventually be expanded to Air France/KLM, ANA, British Airways, Korean Airlines, Singapore Airlines and EVA can use the service, which involves printing baggage tags and placing bags on a conveyor belt.

The pilot is slated to last between four and eight months.