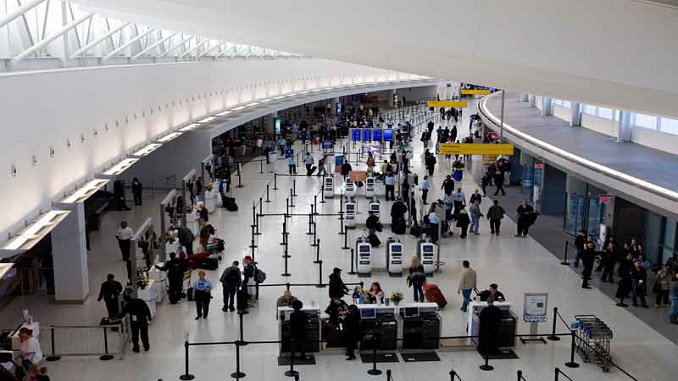 Executives from government and the private sector discuss how U.S. Customs and Border Patrol (CBP) biometric partnerships can help to relaunch air travel in the days ahead in the latest IDNow Podcast from the International Biometrics + Identity Association (IBIA).

Airports have traditionally brought together large groups of people, sometimes in long lineups at many different touchpoints, IBIA Executive Director Tovah LaDier points out in the episode’s introduction.

“Acutely aware of this potential to transmit germs at many touchpoints, CBP’s vision is to expand biometric partnerships to secure and streamline travel from arrival to departure, and for this system to serve as the model for secure and healthy air travel of the future,” LaDier says.

Lo Brutto notes that some analysts see the disruption to air travel potentially being greater than 9/11.

They discuss the comfort level of people with air travel, and the likely pace at which they will resume taking airplanes, which depends on advice health experts are still formulating.

How much measures like temperature screening actually increase the safety of travelers is uncertain, given COVID-19’s spread by asymptomatic carriers.

“A lot of thought has to go into what really is effective, and what will keep people safe.” Wagner states.

Thermal checks, contact tracing and health certificates are worth discussing, he says, but raise issues related to privacy which must be balanced against their yet-unknown effectiveness. The need for checks and the need to avoid choke points do not necessarily oppose each other, according to Wagner, but require building a system that addresses all of the various business requirements in a consistent, efficient way.

Lo Brutto asks about the use of facial recognition as a tool for doing so, and Wagner says that “We found that the path to success in getting that off the ground was working with out stakeholders and our industry partners, the airports, the airlines, different segments of the biometric industry. Because it wasn’t about the technology itself, it was about the application and use of it. Rather than just layering on yet another requirement at the airport, and creating more congestion and more anxiety and more confusion for people, we found a way to weave it in to people’s . . . expectations and experiences, and in a way that can support the modernization of the airports and the airlines and their own business models, and the government agencies involved in this.”

The role of touchless technology, including facial recognition, and the way Biometric Entry/Exit protects people’s privacy by automating the process and limiting the exposure of personal information, including the auditing system CBP has for aviation stakeholders is discussed.

“I think ultimately as more people find out exactly how things are implemented, they should feel more comfortable, and have a high level of confidence that privacy is being protected” compared to legacy processes, Lo Brutto observes.

Different implementation choices, political and funding aspects, and how the pandemic will affect people’s perceptions of programs like Biometric Entry/Exit are discussed in some detail during the podcast.

Wagner and LaDier spoke to Biometric Update about the legal landscape for facial biometrics as part of a feature article on policy and regulation.

The previous episode also focussed largely on air travel, with experts from TSA interviewed by an executive from NEC America.