Custom smartphones held on social-distancing sticks are helping refugees in Jordan with COVID-19 pay for shopping deliveries with a biometric iris scan. Over two and a half thousand people have made use of the quarantine delivery service, part of the much larger UN World Food Programme ‘Building Blocks’ initiative, which uses blockchain ledgers to manage aid and cash for over one hundred thousand Syrian refugees living in camps in neighboring Jordan.

Building Blocks operates with the UNHCR’s refugee identity scheme which is using iris biometrics in the camps to authenticate transactions. The technology which powers the verifications for all aspects of life around the camps in Jordan is produced by UK-based IrisGuard, which has registered more than 2.7 million people – over 5.5 million irises – across five countries as part of the larger program.

The company has been working with the UN agencies since the outset of the crisis in Syria, meaning the youngest refugees who were scanned for enrollment at one year old are now nine-year-old school children.

IrisGuard developed a mobile device which was built in 2019, ahead of growing pressures to shift to contactless verification during the pandemic. Simon Reed, IrisGuard’s Deputy Director, described the customization of the EyePay smartphone in an interview. “There’s a camera with near infrared sensors, special prisms, lenses and obviously some firmware. There’s software in here, apart from that, of course, it’s a standard regular Android phone.”

Refugees who test positive for COVID-19 and are in self-isolation with their families can telephone an order to the supermarkets at the camp. Staff prepare the order and take it to the shopper or someone they have designated, and does a contactless, socially distanced handover. The smartphone is held on a stick for the iris scan – unaffected by the face mask – and connects with the blockchain database to debit the bill from the shopper’s account on matching their biometrics. A small Bluetooth printer on the delivery person’s belt produces a receipt with the updated balance for the shopper. All can be done at a distance and with gloves. 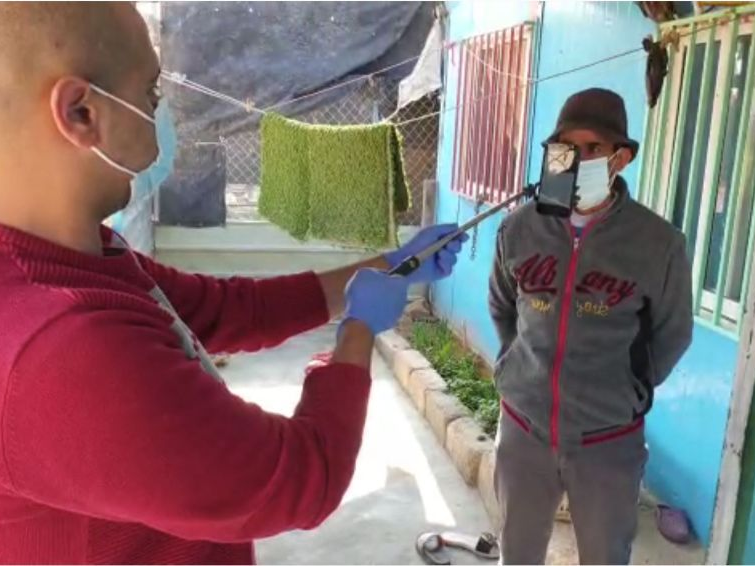 Before the fully mobile deployment of iris verification, IrisGuard has been working with UN agencies to register refugees for eight year. Iris verification was chosen due to accuracy and the speed of verification.

At the two main supermarkets serving the Zaatari and Azraq camps there are 48 cash-out points linked to the system. Around $400 million per annum goes through the supermarket system in Jordan to support refugees.

A more common approach to handling and distributing cash to people in crisis situations is by a debit card system, sometimes with a PIN or biometric verification. IrisGuard has conducted two studies into fraud with these systems in the last three years.

“On the Syrian crisis alone up to this year, that’s worth about $1.4 billion dollars. And if you take the average of, let’s say, $19-20 dollars a day per person for an average family, a hundred dollars, then that works out at about six and a half million people who you could have fed or you could have supported.”

Reed believes proof of life such as that built into iris biometric recognition is increasing important in the aid sector where the trend is to more dispersals of cash rather than logistical interventions. “Most of these donors are now looking at an average increase in distribution of aid as cash by about 17 to 20 percent per annum,” says Reed.

The onset of COVID-19 has led to a 35 percent increase in enquiries for IrisGuard, which is continuing to develop new systems.

“That innovation eventually comes back into mainstream as well when it’s just seen as a niche. COVID is going to drive governments to be much more mindful about where the money goes outside of the country because they’re going to have to support their own communities as well.