Ambarella doubles up on resolution for imaging, AI at the edge

Ambarella, a provider of semiconductor products for next-generation video and image processing, today announced a new family of imaging processors that have increased resolution and edge AI processing capabilities. The new chips will help the company expand in existing markets such as security cameras while offering new opportunities in biometric identification such as Smart City and retail applications. Applications include occupancy monitoring, missing persons identification, and line management in retail stores.

Ambarella’s new CV5S and CV52S SoC (system-on-chip) products bring a new level of performance for security cameras, including 4K resolution and 3D depth-sensing. Other chips have 4K resolution, of course, but Ambarella’s advancement with the CV5S is to enable four imager channels at high resolution in a single SoC. The chip (which can interface with up to 14 cameras) can perform AI operations on each of the four channels at up to 30 frames per second. This represents a 2X improvement in resolution and memory bandwidth over the prior generation while using 30 percent less power.

What this means in terms of security cameras, for instance, is a 360-degree field of view camera that does not need to connect to an external piece of hardware for AI processing while not generating excessive heat inside the camera. Ambarella notes that the multi-imager segment of the security camera market is the fastest growing segment because they are easier and less expensive to install-fewer cameras need less cable and less time to install. From another perspective, device management is easier (fewer IP addresses are needed) and syncing video feeds across a single camera is easier because issues with network data transmission are bypassed, as one example.

Applications for the CV5S include uses where customers need to monitor wide indoor or outdoor spaces ranging from hallways to road intersections. Ambarella executives said they expect to see the chips deployed in applications such as building security, airports, malls, retail stores, stadiums, warehouses and many other areas.

The CV52S is expected to be deployed in many similar areas but has been designed with a focus on enabling cameras to ‘see’ farther and in more challenging lighting conditions. The chip can process 4K video at up to 60fps or 8K resolution at 30fps and includes advanced HDR (high dynamic range) for better color and low light processing. 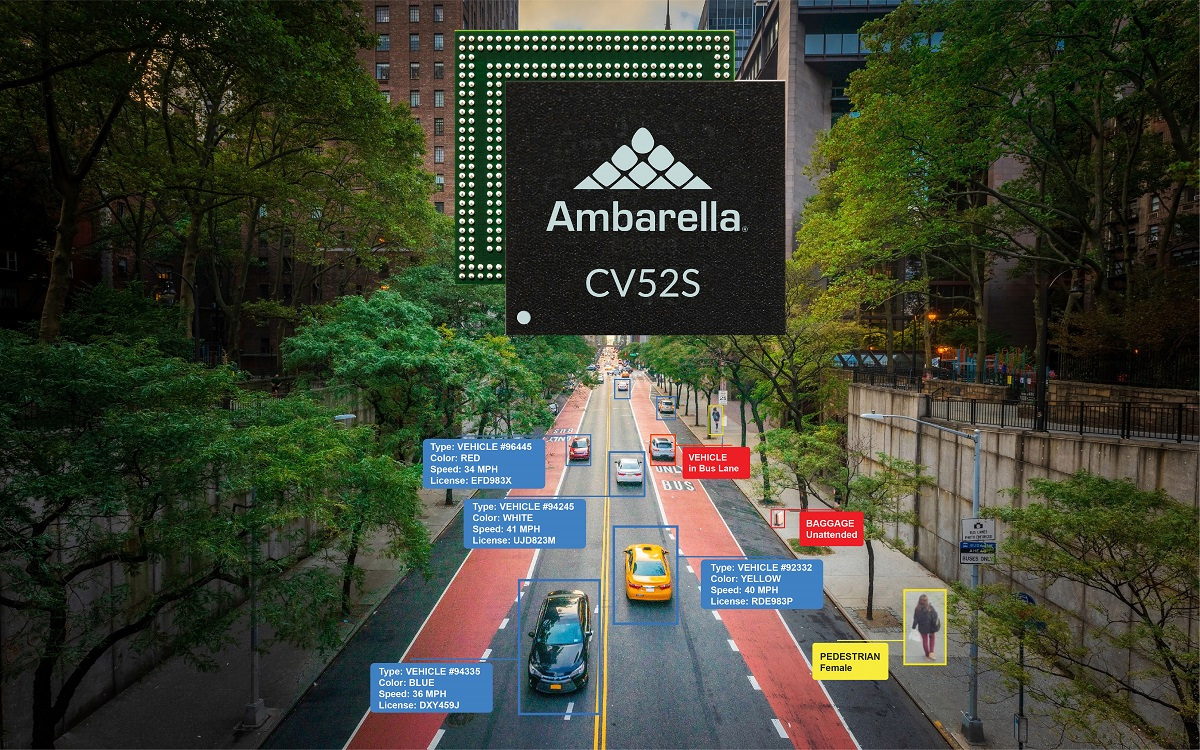 Jerome Gigot, senior director of marketing, Ambarella, said use cases such as Smart Retail will be an emerging application for the CV52S. Cashierless stores need to do precise tracking of objects and people in stores to accurately charge for purchases. Another use for the chip includes cameras used for warehouse product tracking or traffic management. The ability to run multiple algorithms and change them on-the-fly will enable quicker accident identification or allow police to find a specific license plate at longer distances.

One of the factors enabling the new chips to consume less power is the fact that they will be manufactured using an advanced 5 nanometer production process, while many mainstream processors from Intel used in laptop and desktop PCs are made with a 14nm process. Generally speaking, the smaller transistors are, the more of them can be packed into the same “package” space and offer improved energy efficiency. The downside is that new production lines can sometimes have glitches as processes get ironed out, and production capacity takes time to build up. More broadly speaking, there are chip makers who are publicly stating that supplies will be constrained for some products at least through the end of the year and possibly longer.

Ambarella says the new chips will be available in October. Ambarella’s Gigot noted that Samsung is a key fab facility partner, and the two companies have a long history of collaborating on bringing new designs into production on new chip processes. Ambarella has over 800 employees, and more than 80 percent of them are engineers. The company’s design team has been working with Samsung on building test chips already.

Ambarella also recently launched a pair of reference designs with partners Lumentum and ON Semiconductor to bring biometric access control to the IoT.