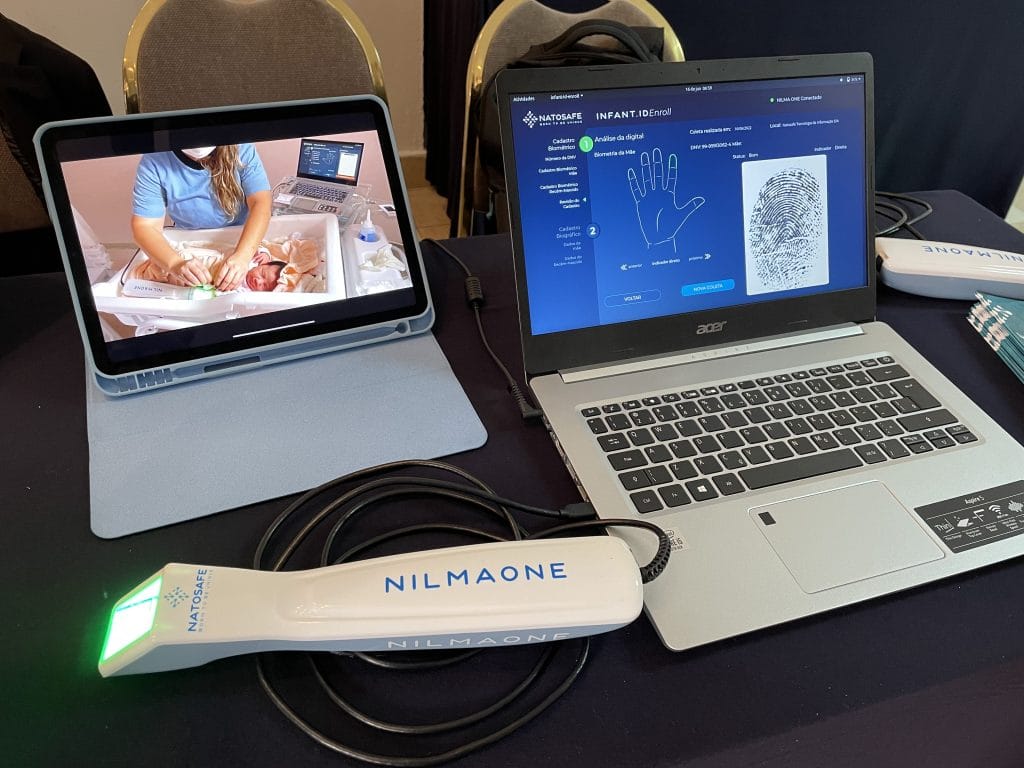 Brazilian firm Natosafe is attempting to tackle baby swapping in maternity units with a mix of biometrics and AI to create profiles that link mother and baby minutes after birth and which can be checked when parent and child leave hospital.

Introducing the technology to a global audience at the ID4Africa 2022 in Marrakesh, Natosafe, under the parent company Akiyama Group, a Brazilian biometrics specialist and distributor for Integrated Biometrics, explained the concept to Biometric Update with a hardware demo.

It is important to note that birth registration happens extremely swiftly in Brazil, with nurses painting newborns’ feet with ink to get a traditional print. Ninety-seven percent of live births are registered in Brazil.

Essentially, in the minutes or hours after birth, a biometric profile is created of the mother, another of the baby and the two are linked. To then leave the health facility, a biometric exit scan is done of mother and baby to ensure they are the right pair, freeing them to leave.

As the baby’s fingerprints will already have changed significantly since its initial scan, AI steps in to determine whether the exit scan matches predictions for fingerprint growth. In the longer-term, records and predictions can become part of vaccination programs, school enrolment and missing children searches.

More than 250,000 babies have been registered via Natosafe so far. It is operational in six out of 26 states and already looking beyond Brazil.

All about the pixels per inch

The custom-built finger, palm and footprint scanner, named Nilmaone after a colleague intrinsic to its development and testing in maternity settings, has camera with a resolution of 3,000 ppi. Scanners with lower ppi for adults are not able to cope with the lack of definition in a newborn’s fingerprints, according to Natosafe.

Its 40x28mm capture area is large enough to scan a baby’s foot, in line with federal requirements for compulsory registration. Due to inherently noisy images, the scanner captures 4912×3684 pixel images at a rate of 24 per second. Meanwhile a neural network assesses the images live to select the best for the sample print, the process continues on a finger until images of sufficient quality are captured.

While the ink prints take a longer time to capture, in part because of the related paperwork, they are less useful. Generally offering little more than an inky splodge, they become simply something of a souvenir, rather than a useful biometric record. There are no exit checks with the ink version as hospital staff would be unable to visually link the prints of a new-born and baby a few days old.

Fingerprints are taken rather than iris scans, explained Natosafe’s Eduardo Liebel in Marrakesh, because the newborns generally have their eyes closed. Iris scanning is also more expensive and associated with criminals, said Liebel.

Soon after giving birth, nurses trained by Natosafe begin the enrollment process at the bedside, with a computer and sensor wheeled in on a trolley. Staff check the existing ID credential of the mother and enter her national ID number, the CPF (Cadastro de Pessoas Físicas).

A real-time check is made against the State identity system. Brazil rapidly expanded its biometric register in the run up to the 2014 elections, although records are generally at a state rather than federal level. A link can be made to an existing biometric record, or if the mother has given birth outside her State, a new record is created.

Her 10 fingerprints are captured. Then onto her baby, which might need its fingers wiped to remove the vernix still on its skin. Again, all fingerprints are taken. Natosafe has found that this takes just under 13 minutes on day zero, dropping to just over 7.5 minutes by the time the baby is one day old, and a minute quicker from 2 days onwards.

The Nilmaone is on a wire to the laptop on the trolley which gives enough maneuverability to reach the infant’s hands. The on-screen platform, Infant ID, guides the nurse through the process, requesting each digit in order. An adult fingerprint is rejected at this stage.

A live birth registration number is generated (DNV or Declaração de Nacido Vivo), and saved to the newborn’s 10-fingerprint profile, which is linked to the mother’s. The scanner can also collect palm and footprints where required.

The system sends the information to the local office of the civil registry. After leaving hospital, the mother or father (if included in the registration via his ID; his fingerprints are not taken) can go to the office to collect the birth certificate. In future, biometric authentication could be introduced for collection.

No cases of the wrong baby have yet been detected with Natosafe, but it a large part of the problem it is aiming to solve. Around 500 babies are switched in Brazilian maternity wards each year, the team says. There are around three million births a year in Brazil (population 217 million), and in 2016 7,500 children were reported missing.

The same report details the difficulties in solving these cases and there is no effective way of sharing data on missing people to institutions such as hospitals. As children do not begin acquiring identity documents until the age of 15 or 16, there is no fingerprint record for matching missing children, a source says.

Although as 97 percent of live births are registered, ink prints should be available. They are simply not legible.

Brazilian media coverage of missing children and swaps seems to match a sense of fear and also that mothers and babies are separated, perhaps unnecessarily, soon after birth for tests. A government-led ‘humanization’ plan intends to improve prenatal and childbirth processes. Incidentally, part of the scheme is to ensure mothers and babies stay together for the first few hours due to the improved outcomes for bonding and breastfeeding. While the Natosafe system is quicker than the ink and paper approach with its forms, others may argue that the whole endeavor be delayed.

Natosafe’s approach saves the fingerprint files in various formats so that they can be read by existing schemes such as Verifinger or the open-source Mindtct. But it also includes AI to assess the minutiae of the newborn’s fingerprints to extrapolate how the fingerprint will grow with the child. The growth factor study was vital to proving the system, explained the team.

The growth factor modelling is needed even for the maternity ward exit check typically 48 hours after birth, but estimates can be generated for a child at any age to be sent to border guards in the case of a missing child.

The system also means that fingerprint biometric checks for children undergoing vaccination or enrolling at school can also be checked against the birth registration. The six Brazilian states already using the system, including Rio de Janeiro, are linking it to their education departments. It could also be linked to health insurance and for linking siblings.

Already approved by Brazilian authorities and U.S. FBI, the hardware and software solution is being advertised to the general population rather than authorities, explained Natosafe’s Henri Nicaise at ID4Africa.

There are three client categories, said Liebel: the government if it moves on from its requirement for ink prints; border control and airports and hospitals whether public or private. Hospitals may even be able to compete on offering it as a childbirth service.

Meanwhile, the team is in talk with many other Brazilian states, plus Panama, Chile, Uruguay and Saudi Arabia.