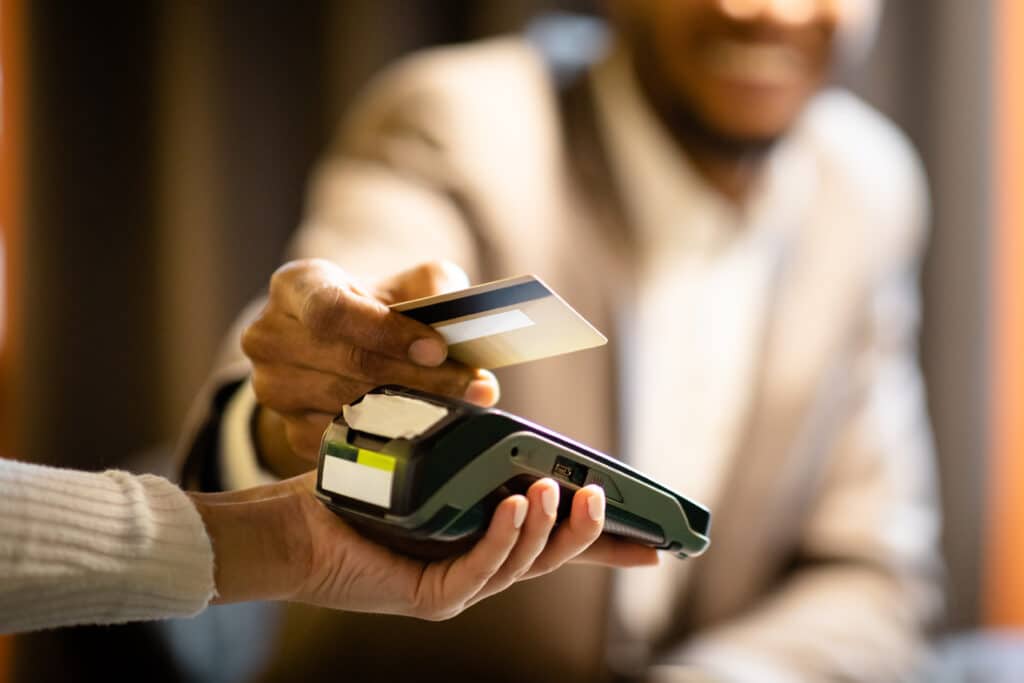 The new biometric payment card from Giesecke+Devrient has been launched under the brand name ‘Convego YOU.’

Benefits to issuers include a compelling new offering for high-value customers, an enjoyable user experience, inherently secure authentication, robust onboarding and G+D extensive experience as a partner, according to a company announcement.

Activation is carried out with a sleeve or mobile phone app on Android or iOS.

The biometric cards are produced through hot lamination, and their secure element is EMV and CC certified, G+D says.

G+D’s partners on the Convego YOU cards are NXP Semiconductors and Linxens. The three partners are behind the biometric payment card originally trialled by Crédit Agricole in 2019, which Fingerprint Cards supplied the sensor for.

An advertisement from G+D depicts the cards’ use for retail, travel and hospitality payments.

“With the advancement of biometric technologies, banks can now offer an advanced card that is uniquely recognizing its owner every time upon payment – a card that knows YOU,” says G+D VP and Global Head of Card Products Mikko Kähkönen.

G+D has previously launched other products, including a secure remote identification solution, under the Convego brand.

The company is also a part of the E-Kart joint venture, which partnered with Idex Biometrics last year to deliver biometric payment cards in Eastern Europe.

STMicroelectronics says its preparations to bring its biometric payment cards to market are progressing, Payment Navi reports, as translated from Japanese by Google.

The company showed off its STPay-Topaz-Bio biometric system-on-card (BSoC) at Trustech 2022 in November and December, along with the reader/writer integrated circuits for NFC, ST25R3916B-AQWT and ST25R3917B-AQWT.

The cards demonstrated were built with Fingerprint Cards’ sensors on a pre-laminated inlay, and a Linxens EMV module.

The company also revealed a partnership with Ellipse on dynamic CVVs to enable security code changes.

STMicro’s technology is certified for NFC Forum CR13, in addition to EMVCo 3.1a.