Infants born to mothers with HIV have between a 15 and 45 percent chance of contracting the virus if they are not treated, but treatment of mothers and babies with antiretroviral drugs at intervals can reduce the transmission rate to below 5 percent, according to World Health Organization statistics. Many infants are lost to treatment programs, however, as their caregivers fail to bring them back for the necessary repeated vaccinations, leading to numerous preventable cases of HIV, causing a range of negative health outcomes, including early death. Identifying those infants who require treatment is a possible first step toward ensuring they receive it, but identifying infants without the proactive help of caregivers is a social problem for which the solution has long eluded the world, including the biometrics industry.

Paul Macharia earned his Masters’ degree from the Africa Nazarene University for his work researching infant biometrics in an effort to solve this problem, and improve the rates of infant HIV treatment in Kenya.

“Right now the whole world is talking about elimination of mother to child transmission of HIV,” Macharia told Biometric Update in an interview. “But for that to work, the infants have to come to the clinic, at least for the first 12 months, up to 18 months. Sadly, many mothers or caregivers don’t bring their kids.”

When Macharia presented his challenge and findings at ID4Africa 2018 in Abuja, Nigeria, ID4Africa Executive Chairman Dr. Joseph Atick issued an official appeal to the global identity community for help to tackle the issue of biometric infant identification.

Research unveiled by Anil Jain of Michigan State University at ID4Africa 2017 showed that fingerprints collected at six months of age can be used for identity verification, and Macharia hypothesizes that fingerprints are adequately formed and stable enough for biometric use from birth, but challenges unique to infants have historically prevented the collection of good enough quality data. He says that characteristics such as the moisture content of infant’s skin seem to increase the difficulty posed by the fine ridges of their fingerprints.

To build his case and work toward a resolution, Macharia ran a trial of 80 children in four different age cohorts, all below one year old, at the Kenyatta National Hospital Research and Programs Department. He has been supported in his research by several leading Kenyan health researchers, including Head of e-Health at the Ministry of Health, Onsemus Kamau, and experts in health economics, who have conducted cost/benefit analysis of identity systems for vaccination programs.

The trial showed promise for improving the quality of the biometric data captured, as measured by NFIQ scores, to the point where it would be good enough to be used for identification of the babies, Macharia says. He was able to use biometric data collected from children at only six weeks old to identify them over time, but he reports that some of the worst quality biometric data was collected from older infants, as squirmy nine-month old children are often too excited to fully cooperate with healthcare practitioners.

The systems are costly for cash-strapped governments to purchase and deploy, so while the pilots are making a scientific and health-care case, the must also make an economic one. Macharia says this case has already been largely established. “In the long run the health impact it has on the infants, the cost/benefit analysis shows, is worth setting up the system, even if it is initially expensive.”

Macharia worked with the Kenyan Ministry of Health’s National AIDS and STIs Control Programme for six years, and says that although it is not a government-led project as such, it has created a lot of excitement on the government side.

“It was and still is to an extent an academic approach, but it’s solving a social problem that governments need to solve,” Macharia points out. “When infant biometrics work, it won’t only remain in use for HIV. Civil registration wants to register everyone from birth, and immigration wants to be able to use biometrics to manage all people who are travelling across borders.”

A team of researchers at the University of California San Diego’s Qualcomm Institute has experience in global development projects, including in Africa, and identity expertise in addition to health technology development specifically for resource-limited and remote settings. They heard about ID4Africa’s official appeal for help in solving the challenge of infant biometric identification from Caribou Digital Founder Chris Locke, with whom team member Michael Kleeman has worked in the identity space. The team at UC San Diego had already been working on biometric identity verification for infants with the support of the Gates Foundation. Locke introduced Kleeman, who leads global outreach and program development for the project, to Atick, who connected him with Macharia, and the UC San Diego team and Macharia are now working together on a larger-scale pilot of Macharia’s project in Kenya.

“We had anthropologists, designers, technologists and doctors,” Kleeman said in an interview with Biometric Update. “Don Norman, who’s the father of human-centered design is part of the team, and we really did this as a human centered design project. We went through over a hundred prototypes.”

Dr. Spencer, Kleeman, and the rest of the team recognized early on that methods of collecting biometrics from adults were not effective for collecting them from children, and hypothesized that an ‘infant-centric’ approach that accommodated infant behavior, physiology, and care-giver concerns could be more successful. The team spent months watching infants to bridge the gap from conceptual to practical problem-solving. The many possible designs explored by the team included an easily-grasped ball with embedded sensors and various non-contact methods that ultimately showed the most promise.

Macharia likewise describes the challenges of developing technology to solve the challenge of infant biometrics as an incremental process. “Thus far there is nobody who has technology which they can say is 100 percent perfect, but all this pilot testing and prototyping will help us get to the right end point,” he says.

The UC San Diego team has now developed a device which registers prints from 10 fingers and the palm with a non-contact optical sensor. It captures monochrome images, illuminated with novel light and polarization strategies. The platform captures images in rapid succession, and uses machine learning and pattern recognition to identify and enhance the best images for feature extraction. The platform uses state-of-the-art biometric matching algorithms, Kleeman explains, that are improved as more data is acquired. The system achieves an identification accuracy rate of nearly 100 percent for infants 2 days and older.

The device can also record vital signs non-intrusively, and can be used for all ages, not just infants, increasing its utility for health care practitioners. It is also inexpensive, to the extent that Kleeman believes that shipping them to Kenya may cost more than the devices themselves. 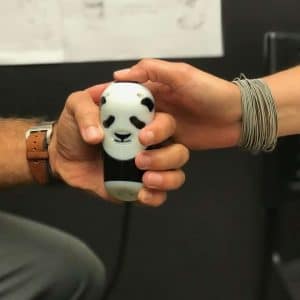 “We looked at this as a fundamental research problem that wasn’t solely a fingerprint engineering problem, but was about understanding the subjects we were looking at, understanding the environment in which these programs are undertaken, et cetera,” Kleeman says.

The device is undergoing validation and field testing, so far successfully, with a large-scale vaccination program in a Tijuana hospital. It is being used by healthcare practitioners, just as the devices have been in Macharia’s trials. The research protocol that Macharia uses is similar to the one the UC San Diego team has used in the Tijuana trial, Kleeman says, and once the small differences are ironed out and funding is secured, the device can be deployed to Kenya for the next round of testing.

That next round will help build Macharia’s scientific case for the feasibility of infant identification with biometrics, as well as provide more data for training the algorithms, Macharia says. They will also demonstrate the device’s effectiveness and cost-efficiency for other applications, including private sector for-profit projects, which Kleeman hopes will help subsidize future humanitarian projects.

Macharia has similar ideas, and sees a wide range of potential uses for the device in health care, but also in financial services, telecommunications, and government services. “For all these industries biometrics is a key component,” he says. “Functional biometrics for unique identification solves a lot of social problems in those industries.”

In pursuit of a way to provide those functional biometrics, Macharia is taking an open-minded and open-ended approach, and he has been encouraged with the industry’s response so far. He has had conversations with NEC, beginning at ID4Africa 2017, and IrisID has been in touch about the feasibility of using iris as a modality for infant biometrics. Macharia says he would consider whatever modality or combination of modalities delivers accurate results.

“Our desired endpoint is to raise the accuracy of identification,” he stresses. “Let’s say iris is 95, but when you combine it with palm print and fingerprint it moves to 99.9 percent, super, that’s a solution that the world needs.” He remains completely agnostic to modalities and vendors. “I’m not selling a product, I’m looking for a solution to a social problem.”

Macharia is enthusiastic in his optimism for the UC San Diego team’s device. Kleeman is confident that funding will be found, and that the trial will show that the problem of acquiring infant biometrics and using them for accurate identification is very close to being solved. The work of scientists like Spencer, Jain and Macharia to show that infant fingerprint biometrics are possible seems very close to fruition.

“This was a research problem that turned into an engineering problem, that turned into a human problem,” Kleeman declares. The team is now working to make the device battery operated and untethered, and are currently in the process of NIST certification. Macharia should have the devices within the next couple of months, at which point he can begin setting up sites for field testing.

With so much at stake for so many people, from new mothers with HIV to national governments, the world will be rooting for his success.