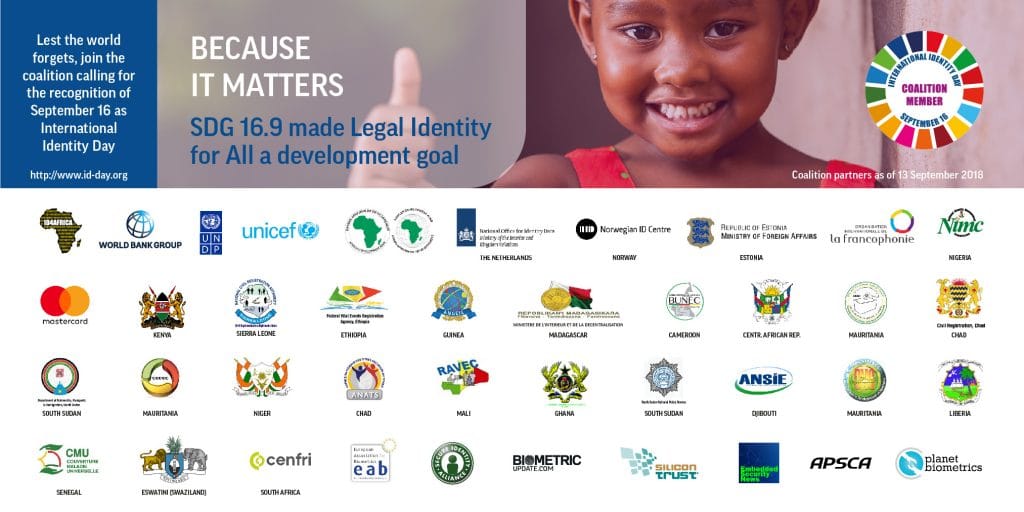 The push for September 16 to be recognized as International Identity Day is continuing to gain momentum with 40 stakeholder groups, including the world’s leading development agencies, government institutions, and public interest organizations now officially part of the international coalition behind the campaign.

The coalition has reached 40 groups as the selected date approaches for the first time since the campaign was launched by ID4Africa at the 4th Annual Meeting of the ID4Africa Movement on April 24, 2018, in Abuja, Nigeria.

“Many causes have commemorative days, except identity, which is surprising considering that legal identity is one of the most important assets a human can possess. Without a recognized legal identity, one basically does not exist in a society, developed or developing alike,” notes Dr. Joseph J. Atick, Executive Chairman of ID4Africa, which continues to coordinate the campaign. “SDG 16.9 made ‘legal identity for all’ an important development goal which was embraced by all 193-member states at the United Nations. This campaign is the logical extension of that work. Lest the world forgets the importance of identity, we urge all policy makers to join the coalition to help create a permanent reminder that will give each country the opportunity, on an annual basis, to regroup and assess its progress towards this most fundamental human development goal.”

More than 1500 signatures were collected for a petition endorsing the proposal at ID4Africa 2018, representing nearly 99 percent of the delegates in attendance. The campaign shifted to institutional engagement in August in preparation for policy advocacy with UN member delegations. That engagement includes sensitizing delegations and their governments to the importance of the issue, and urging them to vote in favor of the proposed resolution when it eventually reaches the floor of the UN General Assembly. The coalition will also promote the protections that need to be in place for inclusive identity frameworks to respect human rights and be deployed for public good.

“The coalition has already received expressions of interest from several countries offering to be among the sponsors of this resolution at an upcoming UN General Assembly,” Atick says. “These are being evaluated by the coalition and we remain open to exploring more propositions from around the globe to create participation from countries across all income levels and geographies. The response has been heartwarming, and it is only the beginning as this campaign as well as the coalition building will continue until it attains its stated objective.”

In addition to ID4Africa, organizations participating in the coalition include government and non-government groups from 19 African countries, several United Nations Agencies, Mastercard, the EAB and SIA, and Biometric Update. The campaign is also supported by industry stakeholders including Integrated Biometrics.