Infant biometrics in the spotlight at ID4Africa 2019 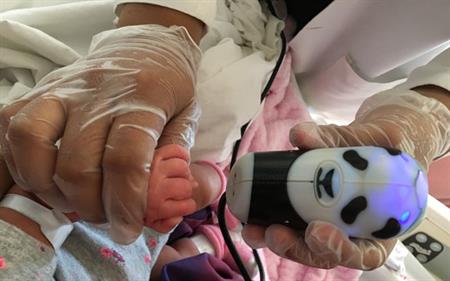 Among the highlights of the second day of ID4Africa 2019 in Johannesburg, South Africa, was a packed and at time contentious informational session presenting the findings of five experts in infant biometrics, moderated by Dr. Anil Jain.

The spotlight session featured presentations from Joshua Engelsma, a PhD research fellow with Michigan State University’s research team, which is led by Jain, as well as Yaseen Moolla, senior biometrics researcher for the Council for Scientific and Industrial Research (CSIR) of South Africa, Eliah Aronoff-Spencer of the University of California at San Diego team behind the Ion device and Kidprint initiative, Element Chief Growth Officer and Managing Director Barbara Iyayi and Kenya Ministry of Health Data Manager Paul Macharia.

Jain laid out the need for infant biometrics, as well as the associated challenges, before Engelsma presented his team’s findings on infant fingerprints. The MSU researchers have determined that the inter-ridge spacing is roughly four to five pixels in infants, compared to 9 or 10 for adults, so they have developed a device with a 1900 ppi sensor, the prism placed in front of the sensor to capture data from fingers in a grasping position, and uses a fusion of three matching algorithms, including one developed in-house for high-definition images.

Moola noted the potential of ear-shape biometrics, but also the lack of evidence of their effectiveness. The CSIR team worked on several different modalities, before settling on a contactless fingerprint device with high resolution. Aronoff-Spencer, whose team also uses contactless fingerprinting, notes that his team used sensors with up to 4500 ppi, but found that beyond 3500 ppi higher resolution does not increase accuracy. He suggests that the use case demands the interoperability of a minutia-based system, and that his team has achieved very promising match rates with single prints captured from three-day old babies. In a trial in Mali, the UC San Diego team’s device was met with high acceptance by mothers, but notes that dust and durability remain a challenge.

Element offers a different approach, based on deep learning and a smartphone camera, which was introduced to ID4Africa two years ago in Windhoek, Namibia. The company uses a combination of palm, ear, and footprint biometrics, and has been testing against a dataset including 4,000 infants.

Macharia, who has worked with the UC San Diego team to trial fingerprint biometrics for infant HIV vaccinations, pointed out that mothers are likely to embrace anything that improves health outcomes for their children.

Shortly after the session’s conclusion, NEC announced that a recently completed trial in Kenya to identify infants enrolled as young as 2 to 24 hours had an error rate of only 0.3 percent, according to the company’s analysis. The trial was launched in co-ordination with Nagasaki University Institute of Tropical Medicine and Kenya Medical Research Institute to continue building on field research begun in 2016.

NEC points out that many infants are released from hospital as quickly as six hours after birth, and that UNICEF has noted the need to confirm vaccination schedules within the first 14 weeks of life.
Macharia has worked with NEC to provide and track vaccinations to prevent mother-to-child HIV transmission, and has also begun work on a trial with Ion for similar use.

As the sole government representative on the panel, he suggested that any infant biometric system also needs to be secure, simple for non-technical users, and scalable, which in context means mobile. Macharia also indicated that links to civil registrations systems, data analytics, and a linked reminder system may be desirable. He also predicted that one or two years of successful trials and continued breakthroughs will allow a solution to scale up within the next five years.

In conversation with Biometric Update following the panel, Jain was less optimistic.

“I think the initial reaction is that infant biometrics is extremely challenging, and there is no off-the-shelf solution right now,” he asserts. “I think it will take a couple of years of hard work, showing longitudinal results, because some of the presentations had no data, some of the presentations have not analyzed the longitudinal data, and they have not addressed the reality of what the enrollment time should be, and what the verification time should be. Any time you use multi-modal biometrics, it takes more time and more resources.”

An attempt was made to form a consensus around how long is acceptable for enrollment and verification to take. Aronoff-Spencer says his team started with goals of two minutes and twenty seconds for the processes, respectively, and there was some openness to this target suggested by others, but Jain believes this is not fast enough.

“Ideally the enrollment and verification should take place in the same place as the food being distributed or in the doctor’s office.”

He points out that India scattered Aadhaar enrollment centers throughout the country to capture the multi-modal biometrics that back the world’s largest digital identification scheme, but the context for infant biometrics are vastly different.

“I think many of these people have not been to a very rural area in a developing country. My eyes were opened five years ago when we went to Benin,” he says. That project involved four locations, from a busy urban area to a remote island village, and that in either case, two minutes is simply too long. The MSU team captured or verified biometrics alongside of doctors, simultaneously, for its trial in Agra, India.

As for multi-modal biometrics, they are good in theory, he says, but they take more time, resources, and computing power. The challenge of infant biometrics in developing countries involves offline, battery-powered processes on a mobile device. Some teams do not have enough data, and some do not have sufficient understanding of biometrics. He also says that the use of deep learning is no longer a distinguishing factor in the industry.

What is needed is clear, according to Jain. “What they have to show are the results; longitudinal, time-separated data.”

A clearer understanding of the conditions these systems are most needed in is also important. Not all of the presenters had been participated directly in field trials, he notes.

“We collect the data ourselves, so we know.”

The session was allowed to run slightly over time despite the punctuality of all other sessions, as the packed room continued posing questions and several debates broke out about several topics, including the criteria for the technology’s readiness for deployment and data protection.

Biometric Update will publish some of the statistics released during the presentations in an in-depth exploration of the topic and the panel discussion as part of its ongoing coverage as ID4Africa 2019 Official Journalist.