This article originally appeared on EdgeIR.com

San Diego-based Kneron, a developer of AI algorithms and AI-optimized processor designs for use in edge devices such as surveillance cameras and other smart home products, raised an additional $40 million to further develop its products.

Horizon Ventures led the round, which is reported as a continuation of a previously announced A round of funding. Participants in the company’s round include Alibaba Entrepreneurs Fund, CDIB, Himax Technologies, Inc, Qualcomm, Thundersoft, and  Sequoia Capital.

Kneron unveiled its first chip, the KL520 in May 2019. The chip enables efficient processing of AI algorithms using power measured in the “few hundred” milliwatt range. In comparison, typical CPUs for data center servers are in the 200+ watt range. The power efficiency is a large part of the attraction of Kneron’s chips for use in image recognition applications. Kneron’s facial recognition models are correspondingly efficient, fitting onto chips in under 100MB of memory which outperforming competing models, according to findings from the National Institute of Standards and Technology (NIST). 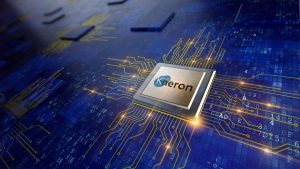 Kneron has sold its facial recognition model used in bank security systems in Taiwan, and it has partners such as Aaeon who are incorporating its chip into pre-built accelerator cards. Earlier this year, Kneron presented its chips embedded in a range of solutions and edge devices at the CES Show 2020 in Las Vegas. Among the partners were:

The combination of software in tandem with specialized chip designs are gaining a lot of investor interest. Their importance is linked in part to the fact that running AI on the device means there’s no need to send large amounts of data to brawnier servers at the access edge or core cloud. Applications such as image recognition can take place without latency penalties while also saving on energy consumption needed for data transmission and processing by less efficient CPU and GPU-powered servers.

As previously reported, Apple acquired Xnor.AI, a developer of software and chip technology in January 2020 for an undisclosed sum. Like Kneron, Xnor has developed software and chip designs that enable devices to run algorithms used for image recognition, among other possibilities.

There was no hiding Intel’s move into AI chips: the company spent $2Bn to buy AI chip company Habana Labs in an effort to thwart Nvidia’s progress in selling GPUs into the data center market for use in AI algorithm processing, among other uses.

Given that adding in AI acceleration to edge devices will be common in the IIoT market, Habana’s positioning for the data center market may leave Intel hankering for another acquisition for edge AI processing. More than 80 percent of global chipsets will be AI-equipped and the market in the United States alone will be worth $12 billion by 2024, according to forecasts from Research and Markets.

While Intel may be mostly known for its desktop and mobile PC chips, it should be noted that Intel reported that it’s IoT and AI revenue for 2019 totaled $3.8bn. That includes revenue from advanced driver assistance solutions it acquired with the Mobileye business.

Jim Davis is the managing editor of EdgeIR.com and founder and principal analyst at Edge Research Group.