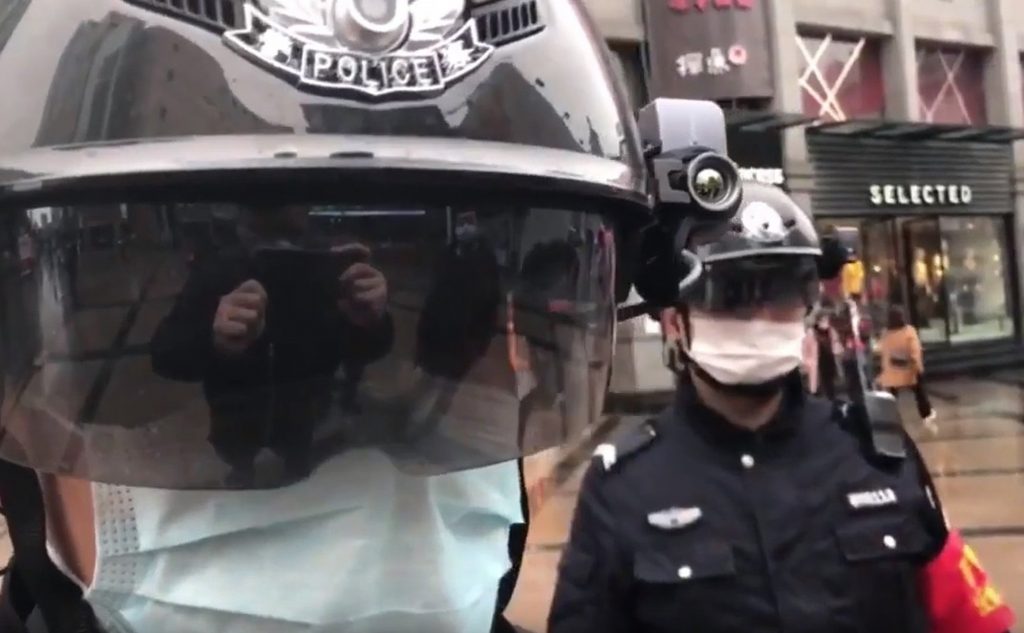 Some police and epidemic-control teams in China are wearing biometric head gear and sensors that allow them to spot fevered foreheads among pedestrians in crowds.

There already are a few players in this niche, and two are particularly worth noting.

One of them, Shenzhen manufacturer Kuang-Chi Technology, makes a polished black N901 motorbike helmet customized with a side-mounted infra-red camera capable of reading the temperatures of people as distant as 15 feet. The helmet debuted last November with an eight-hour battery. An augmented-reality feed that is displayed on the helmet’s wrap-around smoked visor shows the officer blotchy, color-coded video of their surroundings as well as multiple simultaneous digital temperature readouts.

The lens of a second, visible-light camera, which can record high-definition video, has been drilled into the wearer’s agency crest front and center on the helmet. That camera facilitates facial recognition (and other personal data, according to one report) over a 5G connection, also in the helmet. It has Wi-Fi and Bluetooth antennas as well.

It is unclear if all this information is delivered to officers’ eyes in real time. A video distributed by a China media outlet shows digital readout rapidly changing as the scene displayed changes.

Fevers registered by the system are linked to the image of the sufferer through facial recognition systems, and sent to a national database.

Another Chinese company, an artificial intelligence startup called Rokid Corp., has a similar product on the market, but it requires system wearers to be closer than six feet of someone to record a temperature.

Rokid’s product is a heavy-duty looking pair of glasses that has a thermal camera attached to the left arm. Thermal data is displayed on the glasses, but as noted, officers have to be within three feet to get readings on people.

As with Kuang-Chi’s system, Rokid’s product displays temperature data on the glasses for the wearer, and makes a record of fevers.

Police in China have been using biometric wearables for at least two years, since smart glasses with facial recognition were first deployed to monitors travelers at Zhengzhou train station.