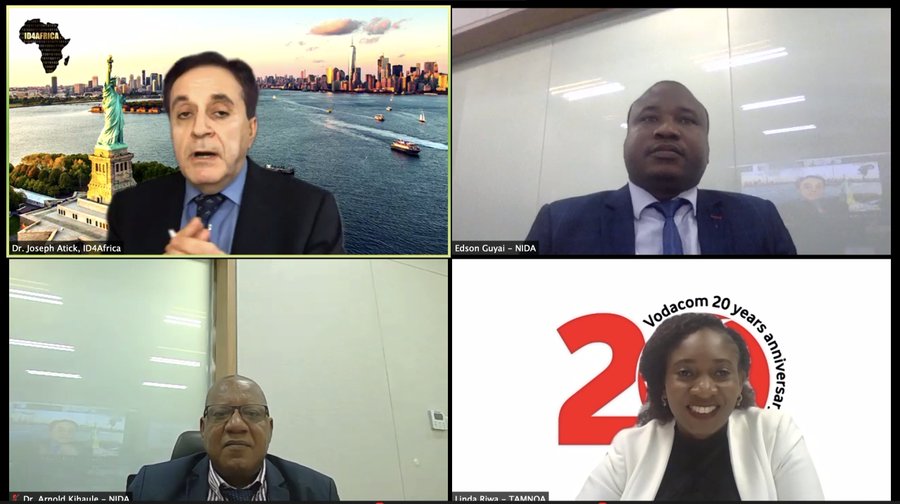 The number of people with legal, digital ID in Tanzania, backed by biometrics has increased by roughly 70 percent over the past five years, prompting an ID4Africa webinar to explore the lessons the country’s story may hold for other nations in Africa and elsewhere.

When the inaugural edition of ID4Africa’s annual event was held in Tanzania in 2015, barely 10 percent of the population in the country had an official ID. After a reset of NIDA with a new vision and leadership, ID4Africa Executive Chairman Dr. Joseph Atick explained, was able to set up a biometric population register that provides the majority of the country’s adult population with a unique identity number, supporting the delivery of public services and a developing digital economy.

Representatives of the Bank of Tanzania, TASAF, ZCSRA and TASA joined the livecast while Linda Riwa of Vodacom stood in for the Tanzania Mobile Network Operators Association (TAMNOA).

NIDA has registered roughly 22.1 million people out of Tanzania’s 27.7 million total adult population plus refugees, according to Dr. Kihaule, giving the identity scheme coverage of around 80 percent. National Identity Number (NIN) and smart card issuance is lagging slightly behind registration, and smart card issuance has reached around 6.4 million so far. Registration has been carried out largely with 5,000 mobile biometric kits.

Voter ID from a previous registration exercise provides one of the documents people can use to enroll for a NIN, and gives NIDA a source to verify the information individuals provide.

This version of harmonization allows the previously collected data to be utilized, without taking on the challenge of incorporating data of inconsistent quality or that does not meet the civil registry’s standard.

NIDA captures ten fingerprints from each person applying for a NIN, Guyai explains, and deduplicates applicants with an AFIS the country has operated for nearly ten years. Biometric verification and authentication are performed with a single fingerprint. The agency also captures facial images, but Guyai says iris recognition is under consideration as the country’s secondary biometric modality due to its accuracy.

The specifications of the smart ID cards and development of infrastructure to utilize them are discussed, along with the major part played by SIM registration in building up the national ID system.

The country’s telecom sector had to overhaul its own customer ID systems, but managed to do so within a year, Riwa explains, at substantial short-term cost. In the long term, mobile operators are looking towards gains from more efficient services operation, as well as fraud reduction.

Mobile operators have concerns going forward, Riwa says, however, “other than that, I think the success of where we are now is mainly a story of collaboration with NIDA and TCRA.”

Convincing people of registration’s benefits was an effort that included the use of social media influencers to communicate with the younger generation, while other channels were used to reach different age groups and communities.

The discussion also dealt with how bank regulations interact with the identity system, Tanzania’s e-government ambitions, and the NIN’s role as a driver in them, immigration’s role as both a consumer of identity data and a vetting provider, and how Zanzibar’s status fits into the national identity system.

The identity community from across Africa and around the world posed many questions about the lessons learned in Tanzania.

The next webinar from ID4Africa will be on ‘Digital public good initiatives as pathways to identity development,’ focusing on open source technology, on December 3.