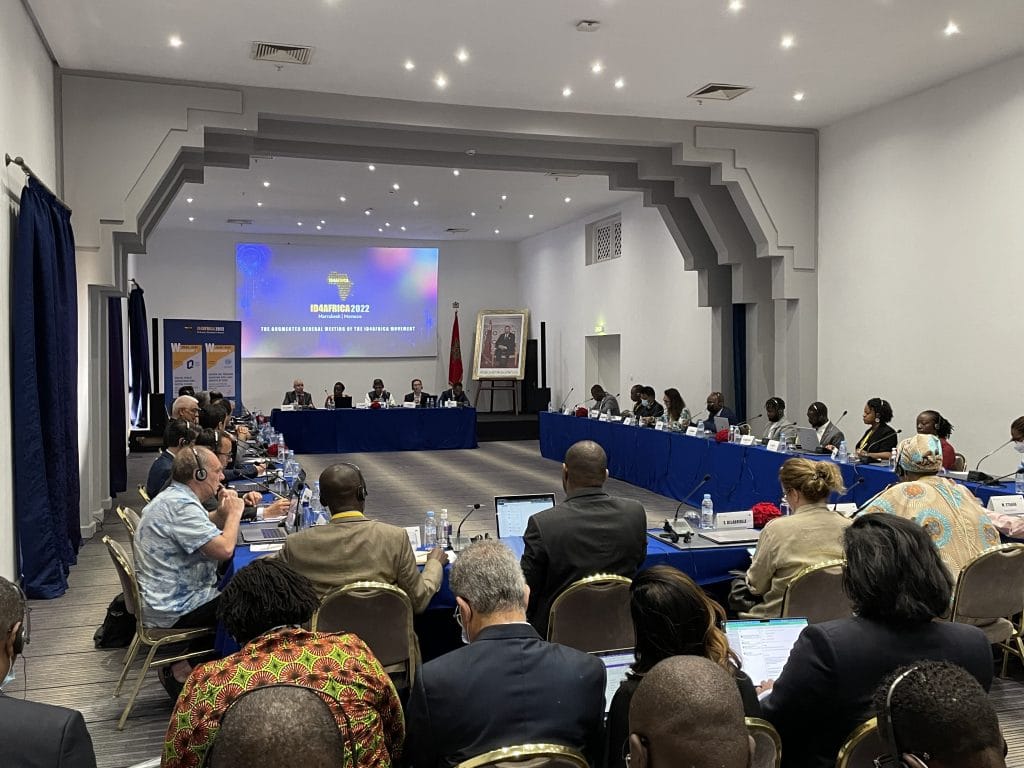 By Frank Hersey and Ayang Macdonald

How will we reach full birth registration by 2030? How can we stop borders being so troublesome? How do you get the public interested in identity? And how can you make digital public goods benefit governance as a whole?

Pre-registered groups of delegates gathered for four workshops on identity issues to start a process of generating recommendations on Day 2 of ID4Africa 2022 in Marrakesh.

Following on from Day 1’s running theme of digital identity as an enabler for services and speeches and discussions from African identity authorities, the workshops were a chance for experts on four areas to come together to share their experiences.

Each structured with a chair, discussants to introduce the themes, a rapporteur to bring together the findings and around thirty participants from civil society, NGOs, international organizations and government, they have embarked on a process to compile recommendations on their issue area for presentation at the second half of ID4Africa 2022, the Livecasts on 28 June (feedback from workshops 1 and 2) and 30 June (workshops 3 and 4).

The topic of digital public infrastructure (DPI) proved so popular among delegates that it was standing room only for the audience for this first workshop, hosted by the Digital Public Goods Alliance.

Co-chaired by Liv Marte Nordhaug, co-lead of the Digital Public Goods Alliance, and MOSIP Founding Chairman and Technology Board Member Sanjay Jain, the workshop heard about specific achievements and plans from participating countries (and MOSIP users).

Going forward, participants will try to determine more concrete ways in which digital public goods and infrastructure can serve countries, and how to remove any barriers.

The second workshop of the day saw stakeholders brainstorm on how border crossings can be made easier through effective digital identity management methods, drawing from the way COVID exposed the inefficiencies of many border management systems.

Moderated by Damien Thuriaux, head of immigration and border management at the International Organization for Migration (IOM), discussants and contributors were unanimous that there has to be a connection between legal ID documentation and frictionless border management efforts.

They agreed that while countries have to make deliberate moves to engage in partnerships that strengthen legal ID systems, the same effort must be directed towards ensuring non-discriminatory access to services for all migrants regardless of their legal status. To have frictionless borders, there have to be frictionless ID systems, one of the speakers stated, with another suggesting that tokenization has to be also considered for systems that require biometric data capture or sharing.

In the course of the workshop, discussants and contributors also shared country-specific experiences on how they are managing their ID systems to ensure smooth border movements, underscoring the fact that there is need to build blocks of collaboration with one another.

A speaker from Kenya, for instance, explained the existing structure of the country’s ID management system and how various border management committees that have been set up, and are working to ensure fluid movements at land, air and sea borders.

The official mentioned that apart from the efforts of Kenya as a country, governments of the East African region have out in place what they call the One Stop Border Post – a system which facilitates the movement of persons and goods across the borders of some countries of the sub-region.

One of the suggestions made during the session was to see how technology can combine with bureaucracy to facilitate travels, probably beginning at the visa issuance level, and not necessarily at border crossing points. In this respect, an official with a company deploying digital ID solutions in the Seychelles cited the country as an example of how biometric technology has been used to facilitate border control and management.

Chaired by UNICEF’s Cornelius Williams, this session had the benefit of framing civil registry progress with the target date of UN SDG 16.9 of a legal identity for all by 2030, also known as Mission 100.

Presented with the fact Africa sees 60,000 unregistered births per day (and a further 14,000 that are registered but not certified), participants shared positive changes they have made in their countries to make birth registration more desirable to parents (or compulsory), and identifying laws that are holding progress back.

Themes of simplification and digitalization were discussed. Mobile registration teams, the role of health workers in registering (rather than only civil registrars having the authority) and technology, if handled correctly, were also discussed. Participants also ventured areas of their own administrations they believed could be problems in order to seek advice.

Chaired by the World Bank’s ID4D, various speakers from different countries shared experiences about the different methods they have been using to create awareness, and engage communities on ID projects in order to gain their trust.

Of the different experiences shared on engagement and awareness, the take-home message is that ID or civil registration authorities have to engage in communication strategies that are not only sustained but innovative in order to meet the realities in the field. It was agreed that such communication messages have to be simple, reasonable, recognizable and should tell the people the right story.

The Kenyan official said for instance that it took a robust and sustained communication strategy to convince thousands of citizens about the Huduma Namba and the necessity to obtain it. He said their communication strategy has gone a long way to dispel some of the misconceptions that people have about the scheme. Such communications should target villages, remote communities and other difficult-to-reach areas, he said.

About Cameroon, a government representative said a lack of interest from a vast majority of the population about civil status registration in some communities has largely given way to acceptance, thanks to massive nationwide sensitization campaigns.

In Cote d’Ivoire, the ID authority used popular musicians to sensitize the population about the necessity of the national ID.

The workshop also covered the importance of research and data analysis, where the significance of impact evaluation for the functioning of ID systems was discussed.

Biometric Update will present further coverage on the outcomes of the working groups when reporting restrictions, brought in to allow full and free discussion, are lifted.