Interview: Sher Khan, the man behind the PIPA Touch

PIPA Touch, a small biometric fingerprint scanner that fits into specially-designed phone cases has been gaining a lot of ground lately, landing media attention as well as finding new fans and investors every day.

Crowd-funding has seen increased adoption over the last few years as entrepreneurs look to leverage social media to get an idea off the ground early. Sher Khan, founder of PIPA Solutions and the PIPA Touch is no exception with his new biometric solution for mobile phone authentication.

I had a chance to sit down with Khan and ask about how PIPA Touch was formed, how the crowd-funding model has been working as well as some of his own priorities as an entrepreneur and a problem-solver.

“I’ve always liked to take things apart,” Khan said. “I love inventing stuff and then what happened, is I became conventional.”

Khan has a diverse background. He was born in India, but moved to England as a young child. He is an analyst in the investment banking sector, and has combined his immense understanding of engineering with an expertise in mathematics and business to bring his company to fruition.

A small team, Khan is the director for PIPA Solutions, and has three others he works with.

When asked about how the company was formed, Khan starts by talking about the problem he’s looking to solve.

“I hate carrying things around in my pocket. Then I started thinking, is this really necessary? It would be wonderful if you could live in a world where you don’t need to carry anything,” Khan said. “As long as you can be identified, that’s the solution.”

“There have been solutions around,” Khan said “but we have created a form-factor and a solution that makes this accessible. One of the weaknesses we found [in existing offerings] was that the infrastructure wasn’t there to support it. There were laptops that had scanners, and that was a disaster.”

“It was a real buzz, everyone wanted one,” Khan said “But the form-factor was wrong and the algorithms weren’t right.”

According to Khan, PIPA Touch comes from a combination of many of these issues, but something that continues to trouble the entrepreneur is our reliance on passwords for authentication.

“The amount of information people put on their phones is unbelievable, and they don’t even put a password on it. It’s too much of a pain to enter a password and people are lazy like me” the innovator said. “I don’t have a password on my phone.”

An advocate for convenience and a sensible right form-factor, Khan says a major roadblock in development was to create something that wasn’t cumbersome or awkward.

“The biggest challenge was that there’s no way I was going to come up with a solution that turns a phone into a brick and looks ugly.”

Striving to create a universal and accessible solution, Khan had to ensure the PIPA Touch is truly tech-agnostic, which came along with a number of considerations.

“It had to have it’s own battery,” Khan explains, telling me the company facilitated a feasibility study on this matter. Additionally, as smartphone manufacturers today strive for propriety, Khan had to create something that didn’t require a hard connection to the phone itself, because as Apple has displayed, that connection can change at the drop of a hat. PIPA Touch communicates with the device over a bluetooth connection.

Though an extra battery is something the average user hates to consider, Khan tells me longevity is hardly an issue. At 100 unlocks per day, the battery in the PIPA Touch has five-days of battery life.

The PIPA Touch works by converting your fingerprint image into a 16-character long pin-sequence. It uses this pin-sequence to identify the user and subsequently unlock the phone and sites that require password authentication. Users can introduce custom fingerprint sequences for an additional layer of security.

“Each site uses a randomly-generated password,” Khan said. “By doing that, we already strengthen the system significantly. There is no key-logging.” 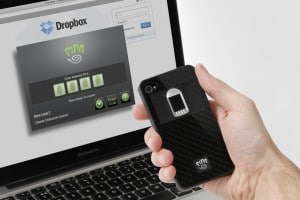 Though Khan thinks passwords are a precarious solution at best, he says the PIPA Touch adds an extra level of security, as it can do a deeper analysis of a website to determine if its virus-laden, before entering a password on the user’s behalf.

“Because we aren’t going to be relying on the human eye to identify a website, [PIPA Touch] reduces duping.”

Currently, PIPA Touch has a campaign listed on indiegogo and has raised roughly 10 percent of its US$100,000 goal.

“I wanted to create a lobby through this crowd-funding model,” Khan said. “Crowd-funding is a new phenomenon and I think there are [traditionally] so many gatekeepers that trying to get an idea through is a nightmare.”

According to Khan, crowd-funding also makes sense from an investment perspective because it gives an early indication of market adoption.

“Crowd-funding provides you a brutal solution to this guesswork,” Khan said “I love anything that bypasses convention and gives an underdog – like myself – a boost.”

“To be honest, I don’t know what to anticipate, as it’s the first time. I love the [crowd-funding] concept – it’s an experiment and we’ll have to see how things turn out.”

Khan plans to make the PIPA Touch development kit widely accessible, so users can customize their own experience and find new exciting applications.

8 Replies to “Interview: Sher Khan, the man behind the PIPA Touch”