Specifically, according to Accenture, the survey looked at responses from 3000 citizens across six countries, including the U.S., U.K., France, Germany, Japan and Australia. 87 percent of U.S. citizens said they were willing to share biometric information to facilitate convenient travel, and only 19 percent of respondents from the United States say they have shared any biometric information to date. 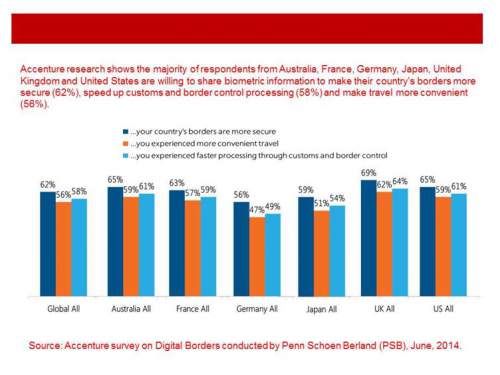 “Industry co-operation and the sharing of international best practices and learnings is key to the development of industry R&D,” Mark Crego, who leads Accenture’s global Border and Identity Services business said. “This industry sharing and co-operation is facilitated at industry events such as the Biometrics conference in London during October, the Smart Borders conference (taking place tomorrow June 24 in London), the Connect ID conference in Washington D.C and by on-going industry collaboration and learning initiatives being spearheaded by the Biometrics Institute and other industry stakeholders including academics and researchers. Accenture attends industry events and finds them a valuable source of industry knowledge and best practice sharing.”

In addition to travel, 65 percent of American respondents said they’d be willing to share biometrics to make borders more secure and 61 percent said they’d share this data to secure faster processing through customs and border control.

Almost three-quarters (71 percent) of citizens support the use of biometrics to verify the identities of everyone that crosses borders and a similar amount – 73 percent – think that using biometrics this way would make countries more secure.

“The very large majority of citizens willing to share biometrics when travelling was a surprise but serves to highlight the need for border management agencies to respond to this level of citizen support with appropriate technology, process and policy changes, that will meet the needs of travelers and better manage the secure transit of people across international borders,” Crego said.

Also from the report, in Germany and Japan, less than half of respondents said they would submit biometrics to take part in an expedited travel program (44 and 49 percent, respectively).

eGates are a hot topic in the discourse surrounding travel biometrics, and Accenture’s findings are not isolated in this regard. According to separate research from Acuity Market Intelligence, airports are set to spend more than $2.2 billion globally on Automated Border Control eGates and kiosks between 2014 and 2018. Specifically, Acuity expects this particular market to grow at a 19.5% CAGR.

“Today we are seeing the greater use of biometrics across many industries,” Crego said. “As people interact more with biometric enabled devices and experience service and security benefits arising from the use of the technology they become more comfortable with it. Resistance levels will decline as personal benefits are realized and personal interactions with the technology increase.”