Integrated Biometrics has shipped 450 units of its Five-O mobile ten-finger enrollment and matching device for use by the FBI, to improve the agency’s field identification capabilities.

Integrated Biometrics integration partner InCadence Strategic Solutions won the contract to provide the units for use with Federal Government software, giving FBI agents mobile identification capabilities in situations in which it was not previously available.

The deal demonstrates the FBI’s confidence in being able to extend biometric technology closer to where identification is needed, according to Integrated Biometrics CEO Steve Thies. “It really has to do with how easy this product is to use for field enrolment, field bookings,” Thies told Biometric Update in an exclusive interview about the transaction. “Bad guys’ days are numbered when the good guys have the ability to identify them at the point of the crime.”

The FBI set strict criteria for bids, to meet agency needs in several different areas. The innovative technology behind the Five-O uniquely satisfies the requirements for mobility and durability, Thies says, but also provides advantages sought by the FBI over prism-based sensors, such as working in any lighting conditions.

“On the mobility side of things, there’s nothing else like it,” Thies says. “It’s a ten-print device, it’s the smallest one in the marketplace today as an FAP-50. In terms of ease of use, it’s got a patented LES film which works in direct sunlight or in bright lights. The FBI has a series of severe environment tests that they provide, and we score as high as you can score on those tests.”

LES technology also works reliably and accurately with wet or dirty fingers, which is also crucial to law enforcement when identifying suspects in the field, and does not give away the position of agents using it with an easily-visible light source. Further, Thies explains that the LES film does not retain latent prints, which provides another significant advantage over competing mobile fingerprint devices. “It’s so important, because if latents get into the database, they make subsequent downstream matching hard to do.”

Mobile field use also requires the Five-O to meet a high standard for durability, which Thies says it easily surpasses. “We don’t encourage people to throw it, but you can drop this on the floor and nothing will happen to it.”

The LES film is laminated onto a thin film transistor (TFT) camera, enabling Integrated Biometrics to put the fingerprint scanning technology in a pocket-sized device measuring less than 200 grams and smaller than 4”x5”x1”, with a low enough power draw to run for hours off of a smartphone. 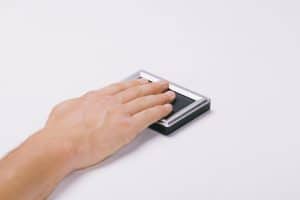 “All those things together in a competitively priced package make it one-of-a-kind out there. We were excited about it when we were going through its development, and we’re really excited about the level of interest and traction. We’re producing about as many of them as we can in the fourth quarter of 2017, expecting great sales on this product in the next year as well.”

Integrated Biometrics also received orders for over two thousand units in the Five-O’s first month of availability, and there are at least a dozen trials currently running with other potential customers, according to Thies.

“The Five-O is designed to be portable, to be mobile, to be easy to use, and it seems like we hit the sweet spot with our customers, and what they were looking for in a small biometric ten print scanner.”

Thies expects the strong domestic sales of the Five-O to continue, while international sales ramp up.

“The distribution is growing,” he reports. “It started off here in the US, and we had most of our capacity tied up building for US-based customers. Now we have international customers trying it and using it.”

As the Five-O reaches those international markets, Thies expects customers will use it for a broad range of applications, opening up even more markets.