The arrival of the connected car will put biometrics onto people’s dashboards in the next 18 to 24 months.
Oct 5, 2018, 2:07 pm EDT | Chris Burt
Categories Biometrics News  |  Biometrics Stocks  |  Features and Interviews  |  Fingerprint Recognition 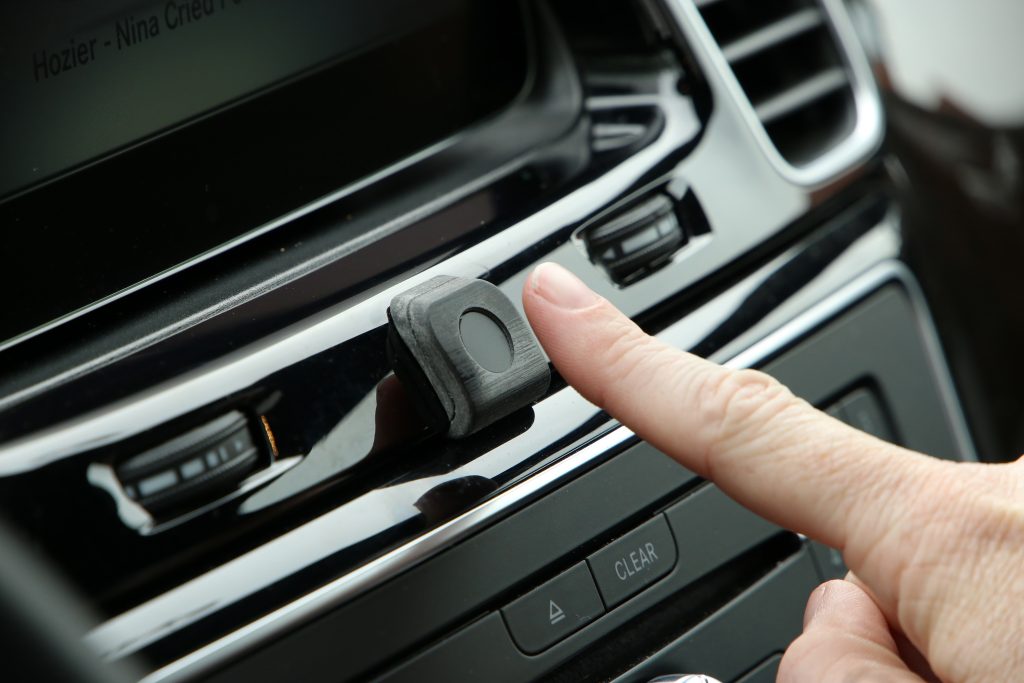 The display of the Synaptics demo SUV is in the usual place, and not particularly large, but it provides a notably high image quality, and it has a fingerprint sensor mounted, immediately below the screen. I reach from the driver’s seat to the dash to touch the fingerprint sensor, and my name and picture appear on the display above it. The display also says that I am not authorized to use the vehicle, as in our scenario I am registered user whose reservation has not been completed. When I press the ignition button, nothing happens. Standing a few feet away, Synaptics vice president of marketing Godfrey Cheng, who is playing the role of a rental agent authorizing my credit card, informs me that the payment has been processed, and grants me permission to take the car.

While healthcare, financial services, and enterprise applications are all major potential future markets for biometrics, the extension of connectivity to “smart” devices may be the biggest potential bonanza of them all. Smart speakers and digital assistants are increasingly present in homes, and the arrival of the connected car will put biometrics onto people’s dashboards in the next 18 to 24 months, Cheng told Biometric Update during the demo.

The display is the location of the sensor in the demo vehicle because it is the interface for a range of services, in addition to a wider range of tools for driving. These new displays represent a new application for Synaptics’ core technologies.

“We really bring the best display quality that you get in your smartphone today to the cars,” Cheng explains.

Upgrading vehicle dash displays with smartphone display technology makes sense, since increasing camera integration and digital technologies are demanding higher performance, and many people already use the display with a smartphone.

“Since 2012, car companies have really felt the pressure, not only from competitors like a Tesla, but also from the big companies from Silicon Valley on the smartphone side,” Cheng says. “There’s a battle really for the control of the center console. At some point the car companies are fearing that they’re going to lose control of the center console to the likes of CarPlay and so forth.”

Rapid improvement in dash displays is driven in part by the new safety and strictly vehicle-centric features being integrated into cars, but also by the potential to do more with a connected environment.

“Part of what they want to do is have a 4 and 5G pipeline into the car, but the challenge there is that if I just give a raw internet connection without applications, it’s kind of wasted. The other thing that the companies are looking for is a way to monetize that pipeline.”

Monetizing the pipeline means adding services, which means conditional access, which will not be provided by PINs and passwords, Cheng argues, but biometrics.

Cars are currently set up to support an array of personalization options. Climate, seat and mirror position, and radio preferences can all be customized with the touch of a finger. Driver recognition enables a much more significant set of benefits, according to Cheng. A vehicle that verifies the identity of its driver can have speed limits imposed on it, or a geo-fence, for instance if it is being borrowed by a young driver. It can allow behavior tracking specific to the driver for insurance purposes. All these things are possible now, but there is another level of personalized connected car services that may be on the horizon, which Cheng calls the “identified driver model.”

That next level of services includes new possibilities for car sharing, and ecommerce possibilities such as paying for tolls, parking or gas, from the driver’s or passenger’s seat, without involving a separate device.

“In a very tongue-in-cheek way, all the services your familiar with in a mobile phone are now enabled with biometrics in the car, so we’re in a way, turning the car into a mobile device,” points out Director of Concept Prototyping Dr. Andrew Hsu.

While Synaptics has had significant success introducing in-display fingerprint sensors to the smartphone market, and its voice technology is featured in a recently announced line of smart televisions, Cheng says the company has pivoted to address the emerging market for automotive biometric displays. It has engaged with the OEMs that provide auto companies with their head units, and dedicated development resources to the market.

Cheng believes the technology will arrive on the market soon, but it has taken time for car companies to begin to understand the business model of the digital platform, which is fundamentally different from their traditional business. As they catch on, and as a new wave of sensor and digital technology is integrated into vehicles, Cheng predicts that a new wave of services will change the driving experience.

“The foundation of all these technologies is secure biometrics,” he says.

Having had my rental for the demo car authorized by Cheng, I reach out to the touch the sensor again. This time along with my name and picture, the screen confirms that my rental has been authorized. With the push of a button, the engine starts.