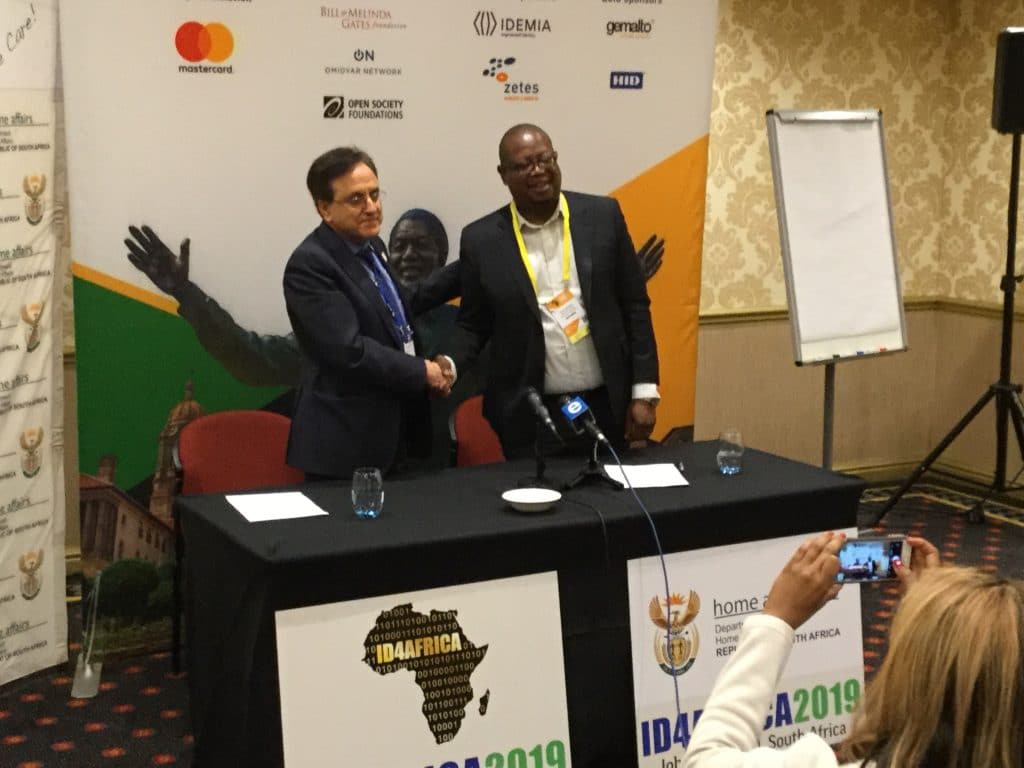 The maturity of Africa’s digital identity ecosystem has led to new debates on crucial identity topics at ID4Africa 2019, ID4Africa Executive Chairman Dr. Joseph Atick told an audience of local and foreign press in a press conference at The Emperors Palace Convention Centre just outside of Johannesburg, hosted by South Africa’s Department of Home Affairs.

Acting Director General of South Africa’s Department of Home Affairs Thulani Mavuso spoke about the importance of legal and digital identity, biometrics, and civil registries, as well as the challenges created by undocumented people moving between countries. Atick reviewed recent developments in the ID4Africa movement, including the launch of the Roundtable of African Data Protection Authorities (RADPA), the launch of the ID4Africa Identity Council (IIC), and the inclusion of Mastercard as a Thematic Partner to promote identity for inclusion. The Bill & Melinda Gates Foundation and Omidyar Network have worked with ID4Africa to bring a number of organizations concerned with social and financial inclusion to the dialogue.

The 5th Annual Meeting of the ID4Africa movement is being held under the theme of “Identity Ecosystems for Service Delivery.” South Africa is further along in developing its identity ecosystem than many African countries, and well situated to begin demonstrating the possibilities of effective, responsible digital identity for a wide variety of government and private sector services.

“DHA is very pleased to be the host for this year’s milestone event, and to welcome such an impressive gathering of distinguished officials and experts, who have come to South Africa to work on the important topic of provision of identity as a right for all,” Mavuso says. “We laud and support the efforts of the ID4Africa Movement for bringing positive change through responsible adoption of identity, and we are happy to share our pertinent experience with the ID4Africa community. I am sure we will also learn from the experiences of others, to benefit our efforts as we launch the next generation service delivery systems and leverage them to drive economic development in the context of our country’s digital transformation anchored on robust digital identity.”

With nearly the entire population of the continent represented at the event, the more than 650 government officials attending will have an opportunity to hear from more than 120 experts and practitioners during 16 informational sessions and 8 plenary sessions. The number of government delegates from outside of the host country has increased this year, even as the capacity remains at just over 1500 total participants, Atick told Biometric Update.

The governments of Holland, Denmark, France, India, Pakistan, Afghanistan, Philippines and Japan are represented at the event, along with international organizations such as UNDP, UNICEF, UNSD, UNHCR, the World Bank, the African Development Bank, the Asian Development Bank, ICAO, and IOM. ID4Africa 2019 also represents a new level of engagement from African Central Banks, and from Africa’s private sector, which has doubled to more than 150 companies attending, according to Atick.

Atick lauded South Africa’s “well-planned, robust, inclusive identity ecosystem which is being leveraged today increasingly for service delivery.” He also noted an important change in the dialogue around the event.

Other include a debate between advocates of open-source and open-standard approaches to defeating vendor lock-in, and between data regulators and those agencies that use identity data.

Asked by Biometric Update about the benefit for South Africa of hosting the event, Mavuso emphasized the need for both the public and private sectors to accurately verify users, and said that while it has succeeded in establishing a universal identity system, the country is still developing functional extensions of that central system.

“I also believe that if we share with our counterparts in African countries it will actually make the agenda of the AU on free movement much easier, Mavuso points out. “Currently the challenges in some countries where civil registrations aren’t taking place in the manner that they are supposed to. If we are able to do that as an African continent, it will promote integration, it will promote economic integration, so that’s the vision that we are going to able to share. If we all achieve a common vision, I guarantee we will be able to achieve our goals at the same time.”