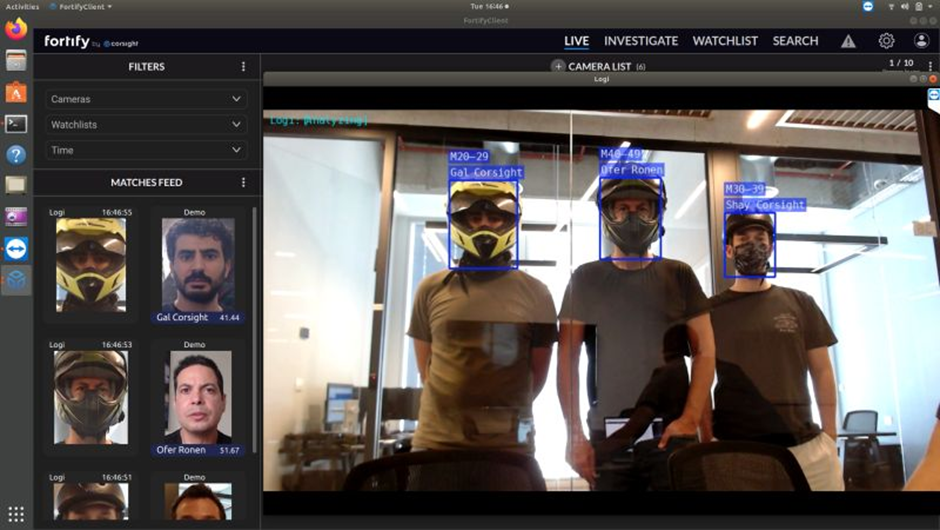 The announcement was made by Ofer Ronen, the company’s EVP of Global Business Development in a Linkedin post earlier this week.

In a written interview with Biometric Update, the Corsight team said the technology behind Fortify is powered by Autonomous AI, an advanced artificial intelligence system developed by various AI researchers and backed by more than 250 patents.

According to Corsight, the key differentiator of Fortify compared to other existing systems in the market is the ability to recognize faces in challenging conditions.

Fortify also matches the face biometrics of people wearing sunglasses, which Corsight says significantly reduces the performance of competitor algorithms, with illumination of only 2-3 Lumens, provides effective recognition of all ethnicities, and support for outdated database with  images as old as 15 to 30 years, whereas the competition does not go back over 10 years, according to the company.

Fortify has been commercially available for more than a year now. The latest version of the software introduced significant improvements.

Firstly, the system’s scalability has been increased to enable rapid searches of databases containing over one million points of interest (POI) in less than ten milliseconds.

The technology can now also run concurrently on multiple channels with exhaustive watchlists, enabling a more efficient hardware application and a reduced total cost of ownership.

As Corsight’s system provides the capability of running on the edge device itself, this eliminates the need to implement expensive on-premise servers and provides a viable solution for large-scale remote deployment scenarios such as smart cities, branched offices, or remote facilities.

Additionally, in the last update, Fortify has also introduced new capabilities such as age and gender detection and multi-server support.

In a comment posted by Ronen in response to his recent LinkedIn post, he said the false non-match rate (FNMR) of the updated version of Fortify was 0.000001.

The figure is corroborated by a recent NIST test, which also shows Corsight’s facial recognition algorithms to be among the most accurate among western algorithm providers, though the quoted FNMR is not for partially occluded faces.

“Unlike many other companies that have improved their algorithms based on the feedback received by NIST, Corsight has achieved first place among the western competition with our first and only submission so far,” the company said.

According to Corsight, there are two points which the company believes are important to highlight with regards to the NIST test.

“The first one relates to the data tested by NIST consisting mostly of high-quality frontal face images collected from subjects voluntarily,” the Corsight team explains.

While the test is indicative for voluntary scenarios such as passport control, the firm believes it does not represent well the challenging imagery typical in surveillance footage, including hard angles, low resolution, poor illumination, and other factors.

“Much of the research and development in Corsight is aimed towards facing these challenges, and unfortunately they are not reflected in the NIST FRVT report.”

Secondly, Corsight said, privacy is also a relevant point to consider, particularly in regards to how data sets for facial recognition are collected.

“All of Corsight’s data has been collected lawfully, in public datasets only. Its adherence to exacting standards is as important as the technology itself,” the company said.

The firm maintains this policy, despite being aware of the significant advantage some competitors may gain from collecting very large datasets of faces, which can significantly boost face recognition performance.

“Some cases of such behavior have even reached public attention being done in a strikingly illegal manner.”

The future of Fortify

According to Corsight, the software is already deployed in many countries globally across several markets.

“Each engagement and deployment is assessed by our CPO to determine its right of use and the ethics in its deployment.”

All of the company’s partnering agreements are subject to NDA, however, and have asked Corsight for the engagements to remain confidential at the time of writing.

However, the company could confirm Fortify is currently deployed at government agencies and companies in a variety of sectors, including law enforcement, aviation, retail, entertainment, and more.