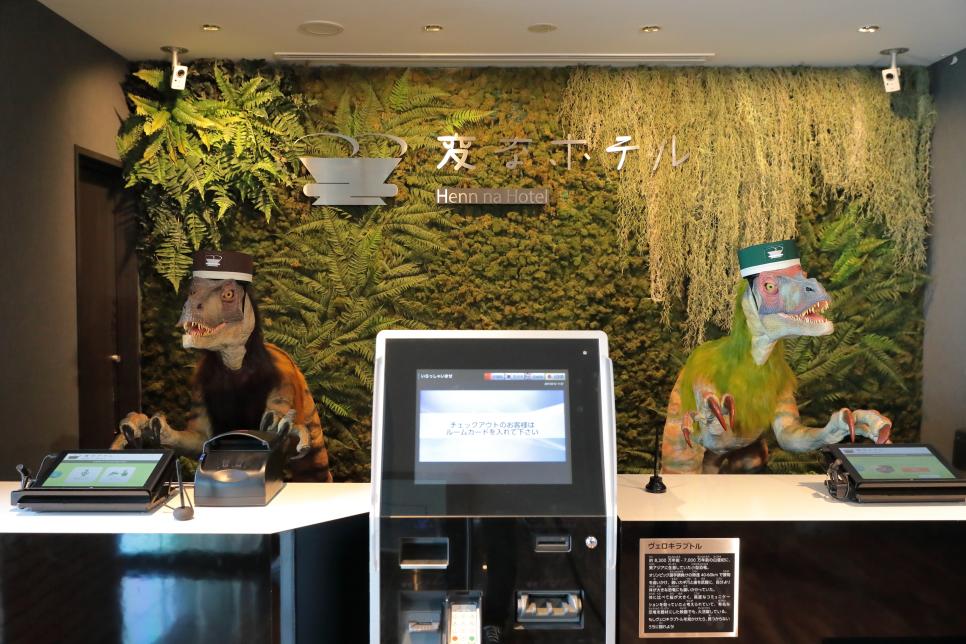 Much has been written about the Japanese hotel company that, five years ago, began assembling a staff roster that was ultimately to be 90 percent robots and biometrics. Much of it misses the point when it comes to understanding why the idea has failed.

Initial reports were wide-eyed with the novelty of the 140-room Henn na Hotel in Nagasaki, reportedly staffed with 243 autonomous and semi-autonomous systems. But very soon after its debut in 2015, sentiment about the concept — along with the company’s plans to create a chain of nine robot-served hotels — went south, though the Henn na remains in business.

More specifically, there is a robotic arm that takes and stores bags for guests, and face scans have replaced room keys.

The flashiest exhibitions of at least semi-autonomous systems are in the lobby. Two cartoony velociraptors and a mechanical woman stand by to guide guests as they arrive and depart. They respond to some commands and questions in a few languages.

At the opening, it seemed that hotel owner Hideo Sawada’s vision of an almost entirely robotic staff might be remotely possible.

All the boilerplate talking points in favor of automation were true. Automation was less expensive than human workers, robot never took sick leave, and the rest.

But Sawada’s dream was already dying within a month of the Henn na’s opening. Headcount bumped back up just to manage ongoing aggravating and sometimes embarrassing mechanical breakdowns and frequent software problems and upgrades. Some notable systems underperformed (and continue to do so).

YouTube hosts a number of vacation videos illustrating how the facility’s in-room voice assistant underwhelms consumers who use superior versions from Amazon, Apple and Google and Microsoft in their homes.

The Raconteur article notes that more than half of the hotel’s 243 autonomous systems and automatons were scrapped last year.

There are a lot of factors that stunted Sawada’s ambition.

For example, the front-desk robotics are clumsy (the dinosaurs), commute in from the uncanny valley (the rubbery android) or simply do not have the compute power to handle more than simple conversations and tasks (both species).

But the fundament flaw is that Sawada confused cool automation with useful automation.

Useful: an automated cleaning fleet that, by all accounts, performs up to expectations.

Useful: a facial recognition system that has replaced room keys.

Borderline useful: Chu-ri-chan, the voice assistant, which seems only to suffer from being underpowered.

Cool: Dim-witted talking dinosaurs at the front desk that look like they escaped a Chuck E. Cheese.

Much more can be considered about robotic lobby dancers, but suffice it to say that when applying artificial intelligence, biometrics and robotics to a business problem, make sure the business problem exists.

What troupe of live, over-paid, lazy lobby dancers in the world is feeling threatened by developments at the Henn na?